Was Queen Elizabeth a Christian? Is She Now in Heaven? 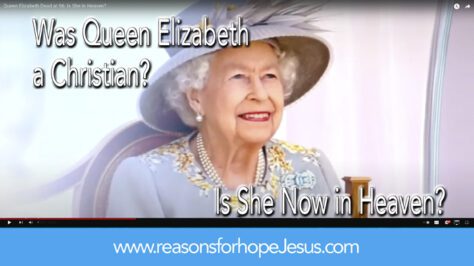 On Thursday, September 8, 2022, Queen Elizabeth died at the age of 96.  Regardless of what anyone thinks of the British monarchy or political system, Queen Elizabeth will be remembered as a remarkable woman. She served her country well, reigned longer than any other English monarch, and notably, was the second-longest reigning monarch of any sovereign country.

Now, her reign has ended. Her eldest son, Charles, will ascend to the throne and reign as King over Great Britain until his days come to an end.

All earthly Kings and Queens have a limited, finite reign. But there is a King in Heaven who reigns forever. And He reigns over an eternal Kingdom — the spiritual Kingdom of God now and an earthly, physical Kingdom of Heaven that is yet to come.

With the Queen’s death, many wonder, is she now with the eternal King in Heaven?  Was she a Christian?

Our friends at Living Waters Ministry have the answer.

“To many of us, our beliefs are of fundamental importance. For me, the teachings of Christ and my own personal accountability before God provide a framework in which I try to lead my life. I, like so many of you, have drawn great comfort in difficult times from Christ’s words and example.” (Christmas message, 2000)

“I know just how much I rely on my own faith to guide me through the good times and the bad. Each day is a new beginning. I know that the only way to live my life is to try to do what is right, to take the long view, to give of my best in all that the day brings, and to put my trust in God. Like others of you who draw inspiration from your own faith, I draw strength from the message of hope in the Christian Gospel.” (Christmas message, 2002)

“Although we are capable of great acts of kindness, history teaches us that we sometimes need saving from ourselves—from our recklessness or our greed. God sent into the world a unique Person—neither a philosopher nor a general, important though they are, but a Savior, with the power to forgive. … It is my prayer that on this Christmas Day we might all find room in our lives for the message of the angels and for the love of God through Christ our Lord.” (Christmas message, 2011)

“Throughout my life, the message and teachings of Christ have been my guide and in them I find hope.” (Letter to the Lambeth Conference from Queen Elizabeth II, 2022)

More  Evidence of a Life of Faith

In December 1939, Great Britain was at war.  The Third Reich of Nazi Germany had ruled in Germany since Hitler took over in 1933, and fear and uncertainty for the New Year reigned in the hearts and minds of Great Britain’s citizens.

In December 1939, King George VI was England’s reigning monarch.  As was the custom, the king addressed the nation on a BBC radio broadcast on Christmas Day, and, in the uncertain last days of 1939, the king spoke words of peace to calm his nation. He reminded them of the only true King, the One who can provide true peace and real rest in such troubled times.  As King George concluded his message of encouragement, he read the preamble of a poem that had been brought to his attention by his 13-year-old daughter, Princess Elizabeth.

And I said to the man who stood at the gate of the year:
“Give me a light that I may tread safely into the unknown.”
Continue reading here.

Monday, September 19 was the funeral and burial of Queen Elizabeth.  She was a  source of inspiration for millions and a symbol of perseverance throughout her life and 70 year reign. She reigned longer than any other English monarch. She appointed 15 British Prime Ministers, and met with 13 U.S. Presidents.  Her life was one of great privilege, but also significant tragedy. In all things she was poised, dignified, and eloquent.

In September of 2001, in the wake of the 9/11 attacks, she addressed Americans, writing, “Grief is a heavy emotion to bear, but the ability to feel a deep loss means we also experienced a profound sense of love. Through the pain, the sorrow can serve as a reminder of the indelible impact that those we cherish have on our lives.”

As the citizens of Great Britain mourns their loss, they also remembers her impact.