The Gate of the Year: A Message to a Troubled Nation

Scroll Down For The Video & to Read the Full Poem 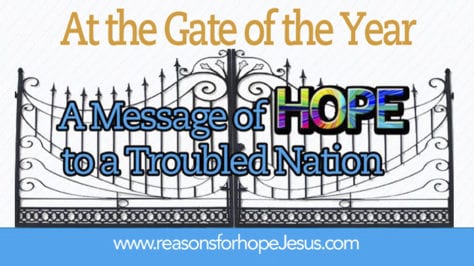 We stand at the gate of the year.  A new year is dawning and it’s time to say goodbye to the old.  We look back with nostalgia for that which has passed and we look forward with anticipation of that which is before us.

As we pass through the gate of the year, no one can know what the new year will bring.  But God knows!

There’s a great lesson to be learned from a generation past.  It comes from a message to the people of one of the most powerful nations on earth as they endured a time of uncertainty and fear.

More than seven decades have passed, but the truths of this message remain.  As we stand at the gate of the new year, let us remember these unshakable truths.

A Message to a Troubled Nation

In December 1939, Great Britain was at war.  The Third Reich of Nazi Germany had ruled in Germany since Hitler took over in 1933.  Germany had become a fascist totalitarian state and the Hitler regime had spread terror across Europe.  In September 1939, Great Britain had entered the Second World War.  And in three months, the nation was gripped in the clutches of fear.  With every air-raid siren that pierced the ears of the English people, anxiety increased and fear overwhelmed them.  Uncertainty for the New Year reigned in the hearts and minds of Great Britain’s citizens.

In December 1939, King George VI was England’s reigning monarch.  As was the custom, the king addressed the nation on a BBC radio broadcast on Christmas Day, and, in the uncertain last days of 1939, the king spoke words of peace to calm his nation. He reminded them of the only true King, the One who can provide true peace and real rest in such troubled times.  As King George concluded his message of encouragement, he read the preamble of a poem that had been brought to his attention by his young daughter, Princess Elizabeth.

Princess Elizabeth was only thirteen years old in 1939.  The poem that she brought to her father’s attention was written by British poet Minnie Louise Haskins (1875-1957).  Published in 1908 and titled  God Knows, the poem was part of a collection of poems in a book titled The Desert.  Years later, this poem gained popularity with a new title, The Gate of the Year, taken from the poem’s first line.

Words of Truth and Hope

King George read the poem’s preamble to reassure the people of England that their future was secure….in the hands of God.

The poem’s wisdom was true for the English people on that Christmas Day in 1939 and it is true for us today.

God Knows/The Gate of the Year

Watch the video clip from a 1940’s movie, The Mortal Storm (below), that feaured this poem.

And I said to the man who stood at the gate of the year:

“Give me a light that I may tread safely into the unknown.”

“Go out into the darkness and put your hand in the Hand of God.  That shall be to you better than light and safer than a known way.”

So I went forth, and finding the Hand of God, trod gladly into the night. And He led me towards the hills and the breaking of day in the lone East.

Upon the death of King George (1952), Princess Elizabeth became the Queen of the United Kingdom, Canada, Australia, and New Zealand.  Remembering the poem, her father had read so many years before, she had the words engraved upon brass plaques and attached to the gates of the King George VI Memorial Chapel at Windsor Castle.  Interred at this chapel are the bodies of King George VI, his wife Queen Elizabeth (The Queen Mother), and the ashes of their second daughter Princess Margaret.  When The Queen Mother died in 2002, the reigning Queen Elizabeth had The Gate of the Year read at her funeral.  The words are also inscribed in a window at the Queen’s Chapel of the Savoy.

Additionally, the preamble of the poem was quoted in the 1940 MGM movie, The Mortal Storm (watch the video clip below).

God Knows / The Gate of the Year

And I said to the man who stood at the gate of the year:

“Give me a light that I may tread safely into the unknown.”

“Go out into the darkness and

put your hand into the Hand of God.

That shall be to you better than light

and safer than a known way.”

So I went forth, and finding the Hand of God, trod gladly into the night.

And He led me towards the hills and the breaking of day in the lone East.

So heart be still:

What need our little life

Our human life to know,

In all the dizzy strife

Of things both high and low,

God knows. His will is best.

The stretch of years

Which wind ahead, so dim

To our imperfect vision,

Are clear to God. Our fears

Are premature; In Him,

God moves to lift the veil

From our impatient eyes,

When, as the sweeter features

Of Life’s stern face we hail,

Fair beyond all surmise

God’s thought around His creatures

Our mind shall fill.

How do you “put your hand into the Hand of God” and let Him lead you this year?

It’s not by doing better, it’s by believing better.  It’s by trusting that  “God knows. His will is best.”

As you enter the gate of the year let this be your prayer:

Open to me the gates of righteousness: I will go into them, and I will praise the LORD: This gate of the LORD, into which the righteous shall enter. I will praise thee: for thou hast heard me, and art become my salvation. (Psalm 118:19-21)

from Reasons for Hope* Jesus

Take a minute and watch the ending of the 1940 MGM movie, The Mortal Storm.  The movie opens in 1933 Germany with Hitler ascending to power and tells the story of a family torn apart by the Nazi regime.  The movie is a sad commentary on the evil that lies in the hearts of men.  It is a powerful testimony to the tyranny of a government that abuses its power.  And, most importantly, it is an alarming picture of where our country could go if the people fail to put their hand into the hand of God and let Him lead.  I encourage you to see the movie.

Inspiration for the New Year:

Not feeling in a celebratory mood?  Remember, you are not alone.  Read this article & watch the short video.