Distressed and Despairing? You’re not alone!

Scroll down for video. 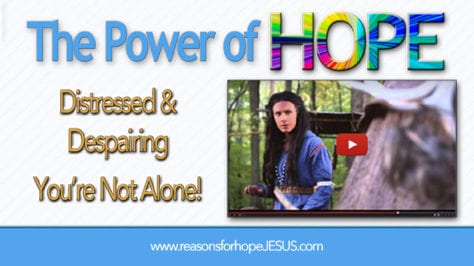 As Christians, we know and understand that we are never alone. We have Jesus with us, every minute of every day, by the power of His Holy Spirit indwelling us.  However, do we remember that? And do we live like we believe that, especially when distress and despair overtake us and our souls are downcast?

The psalmist lamented the same as we do, “Why are you cast down, O my soul? And why are you disquieted within me?” (Psalm 43:5a).  When the psalmist asked that question, he also remembered his hope and proclaimed his faith…even in circumstances of distress and despair:

Hope in God; For I shall yet praise Him, The help of my countenance and my God. (Psalm 43:5b)

At the end of this article is one of the most beautiful songs of hope. The song is sung by Joni Eareckson Tada, a quadriplegic since a diving accident at the age of 17.  Joni lives the words of Psalm 43:5 fully in her daily challenges of life in a wheelchair. She finds her hope in the sustaining grace of Jesus Christ and the strength she receives from knowing Him.  Finding daily strength to live a life without the use of arms and legs, dependent on others for so much, Joni is a beacon of hope and encouragement to all Christians.

The video is guaranteed to warm your heart, give you hope, encourage your mind, fuel your spirit and comfort your soul.  The song is “Alone Yet Not Alone,” from the movie by the same name, performed by Joni Eareckson Tada. Watch and listen as she speaks of God’s grace and strength.

Our hope in Jesus is grounded in the grace that He has given us. His strength is most fully received and most clearly revealed when we find ourselves weak and needy.

The apostle Paul wrote to the Corinthian believers of the importance of our dependence on Jesus and the joy that we can have, knowing He is ever-present with us to strengthen us.

2 Corinthians 12:9-10 …My grace is sufficient for thee: for my strength is made perfect in weakness. Most gladly therefore will I rather glory in my infirmities, that the power of Christ may rest upon me. Therefore I take pleasure in infirmities, in reproaches, in necessities, in persecutions, in distresses for Christ’s sake: for when I am weak, then am I strong.

The words in verse 9 are from the Lord Himself.  Jesus gave Paul both a promise of His sufficient grace in all things and also a reminder that in our weakness, when we depend on Him, He will be our strength.  In Hebrews 13:5 we also read the words of Jesus, “For He Himself has said, ‘I will never leave you nor forsake you.'”

In difficult times we need to remember that He is present.  We need to cling to the grace that He has already given us and that He will continue to give to us.  His grace is sufficient for holding us and His strength will help us stand, if we simply rest in Him, receive His gifts and trust in Him.  Doing that sounds simple, but it’s not always easy when we suffer.  However, we must remember that we do have what we need, and WHO we need, to receive His grace.  It begins in the mind by remembering who God is, what He has done for us and who we are in Christ Jesus.

Often we turn to God’s Word for the assurance and comfort we so desperately need.  Other times, it will be brothers or sisters in Christ who will share words of hope,  peace, and comfort that lift us up.  Still other times, simply a song of faith or a poem of hope will raise our downcast souls and direct our eyes upon the One who is our hope and joy.

Alone Yet Not Alone

Joni Eareckson Tada recorded this beautiful song for the 2013 movie release of the movie “Alone, Yet Not Alone.”  In 2014, the Academy of Motion Pictures nominated the song for an Oscar in the Best Song competition.  Sadly, the Academy revoked the Oscar nomination for a very “flimsy” reason.  They claimed that an email, sent by the writers of the song to about 70 people asking that they listen to the song, was sent as a campaign to influence voting.  Not so.  It was simply an outreach to colleagues and friends and it was not beyond common practices since many Oscar-nominated movies hold previews, parties, and promotions to direct attention to their productions.

In an interview with the LA Times, Joni Eareckson Tada said she was unsure what to make of the Academy’s decision. “If it was for reasons connected with a faith-based message, it shouldn’t surprise us that Hollywood would shun Jesus,” she said. “Jesus has been shunned by much weedier characters.” ¹

While the Academy of Motion Pictures was able to revoke the song’s nomination and they silenced Joni from performing the song at the Oscar Ceremony, no one can revoke or silence the song’s message.

If you are a Christian and you have not seen this movie, I encourage you to  buy, rent or stream it. We need to support all media with strong and faithful Christian messages.

The movie Alone Yet Not Alone was produced by Enthuse Entertainment, a relatively unknown movie production company in Texas in 2013.  At the time of the movie’s release in September 2013, it was screened in only nine cities.  The movie is a historical drama based on a true story of faith and courage.

Alone Yet Not Alone tells the story of a German family who fled their country and sailed to America to escape religious persecution.  Sustained by their faith, they began to build new lives in their new home, but soon encountered many difficulties including the kidnapping of two sisters by the Delaware Indians during the French and Indian War.  The young girls found strength through their faith in God and by recalling the comforting and promising words of an old family hymn, “Alone Yet Not Alone.”   This is another example of faith being strengthened by the mind through remembering our great God and His amazing grace.

The Song and the Singer

Joni Eareckson Tada’s story of life in a wheelchair since 1967 is known by most Christians.  Her life has been a testimony to the strength that comes from resting and trusting in Jesus, and her recording of this song was a true labor of love.  With limited lung capacity due to her disability, it was necessary that her husband Ken push on her diaphragm so she would have enough breath to hit the high notes (you’ll see this in the video).

When the song was nominated for an Academy Award, Joni shared her feelings about the song and her faith:

“When I heard the simple, melodic ballad, I wanted to record it. I really resonated with the words—after all, I sit down in a stand-up world and often feel alone; but of course with my faith in God, I’m never really alone! The Bible is filled with stories of God picking ill-equipped, unskilled people for places of great influence, which is how I feel as a quadriplegic singing an Academy Award-nominated song.” ²

Now take a moment and listen to the Academy Award nominated, then nomination revoked, song:

Alone Yet Not Alone, sung by Joni Eareckson Tada.