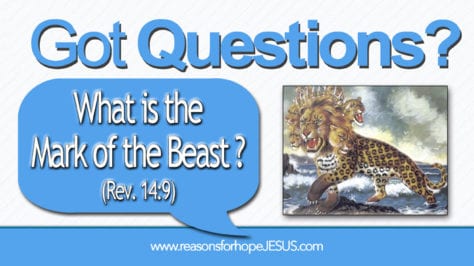 Understanding that we cannot know with any certainty, we’ll look at the Bible for some reasoning about what it might be.  But first let’s review the factual information that the Bible does reveal about this mark and the one who gives it.

Who is the Beast?

While there have been many antichrists (1 John 2:22, 1 John 4:3, 2 John 1:7), and there still could be many more, the beast of the end-times will be THE Antichrist.  He will be the begotten son of Satan, who will rise up out of the sea during the Tribulation (Revelation 13).  He will be empowered by Satan (Daniel 8:24) and he will draw people to himself through deception (2 Thessalonians 2:9-11).

Ever since Satan rebelled and fell from heaven, his strategic plan has been to glorify himself above God by causing men to turn from God and to turn to himself.

While Satan is fully cunning, defiant and destructive in his works, it’s important to recognize that he is not original in his deceptive works.  Instead, he copies the work of God and “twists” it, using lies and deceptions to create confusion — always with the intent to gain control of the hearts and minds of people.

We’ll look at how the mark of the beast will be a counterfeit mark, but first let’s look at other examples of Satan’s strategic counterfeit works.

During the Tribulation Satan will desperately increase his efforts to deceive by counterfeit means.

When Jesus saves a repentant sinner, the forgiven sinner is received into the family of God through adoption (Romans 8:15-17).  God marks His children with a “seal,” which is the gift of the Holy Spirit.

The Antichrist and His Mark

The Antichrist will be raised-up by Satan in unprecedented power after the Church-age saints of God have been raptured to Heaven by Jesus. (Read: What is the Rapture? Is it biblical? and  Why a Pre-trib Rapture?)  When the saints are removed from the earth, so also will the indwelling-presence of the Holy Spirit be removed.  Without the Spirit’s testimony of Christ (John 15:26), the Antichrist will gain authority over people of all nations. (Revelation 13:7)

At the midpoint of the seven year period of tribulation, the Antichrist will demand allegiance to himself.  Our God does not demand worship.  He desires devotion, from which worship flows.  Coming to Christ is a personal surrender of one’s self to a good, kind, loving, merciful and gracious God who desires to mold us in the image of His Son (Rom 8:29) and to receive us into the fellowship of His family (joint heirs with Christ, Rom 8:17).

The Antichrist will demand worship. And with deception he will get it.  People will surrender to him, believing the lie that he is good, and they will take his mark.

Now that we have seen Satan’s counterfeit practices and intentions, next week we’ll look at what this mark might possibly be.  Many have suggested a tattoo?  Could that be?  Let’s look at the reasons some think that?  And what else might it be?  Click here and read: Is the Mark of the Beast a Tattoo? A Computer Chip? A Barcode?

More on this subject: