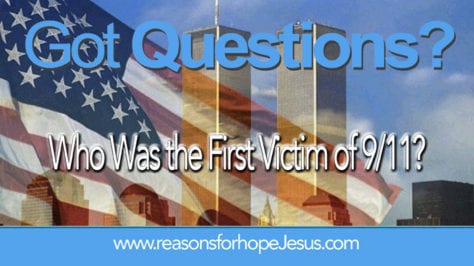 The names are many, and the stories continue to be told of the fateful day in 2001.  There’s one story that you might not have heard.  It is the story of the very first victim, the first murder on that day, and also the first act of heroism on 9/11.  In memory of all who died on 9/11, we share the story of Daniel Lewin.  Read to the end of this article for an often missed perspective on 9/11.

When Daniel Lewin boarded American Airlines Flight 11 on 9/11/01, he took his assigned seat (9B) in business class.  Little did he know that seated in the row ahead of him (8D and 8G) were two terrorists, and another (his killer) was seated directly behind him (10B).  Those three terrorists, along with two others on board, would soon change the course of the plane and the course of American history forever.

Realizing something was happening, Lewin tried to stop the terrorists as they attempted to breach the cockpit.  Sadly, he was overtaken from behind by Abdulaziz al-Omari (seated in 10B) and was stabbed to death. Daniel Lewin was, perhaps, the only person who might have been able to thwart the evil that was about to take place.  Heroically he tried.  Unfortunately, he did not succeed.

Daniel Lewin was only 31 years old when he died on Sept 11, 2001, but he had already lived an extraordinary life of determined excellence and numerous accomplishments.  Born in Denver, Colorado on May 14, 1970, his family moved to Israel when he was 14 years old.  As an American, he could have avoided military service in Israel, but instead, he joined the Israeli army and served four years in the Israeli Defense Forces (IDF) as an officer in Sayeret Matkal, an IDF special forces unit.

Lewin was well trained to identify a terrorist threat and he understood the Arabic language, which probably alerted him to the evil that was brewing.  He was also militarily trained to tactically respond and his courage in doing so should be commended and remembered.

While attending Technion – Israel Institute of Technology, Lewin worked for IBM’s Haifa Research Laboratory and was responsible for developing a processor verification tool called the Genesys system.  He was a brilliant young man whose accomplishments left a mark on the world.

That same year, Lewin and Leighton founded Akamai Technologies and developed  Internet content delivery networks based on their research and innovations. The company’s success soared in March 1999, when servers using Akamai-supported machines handled an extremely high surge and other servers, worldwide, crashed.

By October 1999 Akamai’s stock had catapulted to $300 a share, but with the dot-com bust of 2000, it plummeted to less than $5 a share.  Leighton has said of that time, “We were both pretty focused on getting the job done, and that was true whether the stock was at 350 bucks or 50 cents. It was positive reinforcement. If one of us got worried about a problem, the other would step in and say, here’s how we’re going to get past this one, and here’s why it’s going to work out.”   All should applaud Lewin’s contributions because Akamai’s content delivery network is currently responsible for serving between 15% – 30% of all web traffic.¹

A 2001 FAA memo suggests that as Lewin attempted to stop the hijacking he was stabbed by Satam al-Suqami who was seated directly behind him.²  Lewin was identified as the first victim of the September 11 attack by flight attendants’ calls to authorities on the ground in which they told of the stabbing of the passenger in 9B.³

Lewin is survived by his wife Anne and two sons (eight and five at the time of the 9/11 attacks).  His life, contributions, and heroism have been recognized in many ways.  In Cambridge, MA  an intersection was renamed Danny Lewin Square in his honor and MIT’s award for best student-authored paper at the ACM Symposium on Theory of Computing was renamed the Danny Lewin Best Student Paper Award.  Friends and colleagues memorialized his contribution in the tech industry in 2011 and at the National 9/11 Memorial, he is memorialized at the North Pool, on Panel N-75. Additionally, a biographical book has been published about his life,  “No Better Time: The Brief, Remarkable Life of Danny Lewin, the Genius Who Transformed the Internet” by Molly Knight Raskin.

The company which he co-founded has since become a multibillion-dollar company in cybersecurity.

Another Perspective on Daniel Lewin

Daniel Lewin’s contributions to our world were numerous and should not be forgotten.  We should all be thankful for his life and be humbled by his brave attempt to stop the evil of that day — an evil that was birthed in a Garden many millennia ago.  With Satan’s first successful attempt to do harm to God’s perfect creation, Adam disobeyed God and sin entered our world.  No longer was man’s life in the Spirt.  Man’s life, as Leviticus tells, is in the blood (Lev 17:11,14).  Nowhere do we see the depravity of man more clearly than the shedding of blood, the taking of life—taking that which belongs to God.  9/11 was a spiritual battle that manifested in an earthly evil.

We see the battle between good and evil throughout the Bible.  It is a battle that Satan wages against God and His creation and, in that battle, Satan engages sinful men and women to join in his purposes.  In the Old Testament, we clearly see the battle between God’s people Israel and all other nations.  In Genesis, we read of the conflict between Isaac, the son of the promise, and Ishmael, the son of the flesh (Gal 4:23).

As an American Israeli, Daniel Lewin’s heritage was a descendant of Abraham, Isaac, Jacob.  As radical Muslims, the terrorists are of a lineage that goes all the way back to Ishmael, a “wild man; [whose] hand will be against every man” (Gen 16:12).  Perhaps, it’s no surprise that the first death of 9/11 was an American-born “son of Isaac” at the hands of a Middle Eastern-born “son of Ishmael.”  This conflict continues, and blood (life, Lev 17:11,14) will continue to be shed until Jesus returns and bring peace to the world.

One day, a trumpet will sound and all Heaven will proclaim,  “The kingdoms of this world have become the kingdoms of our Lord and of His Christ, and He shall reign forever and ever!” (Rev 11:15)