What are “The 70 New Year’s Resolutions?” 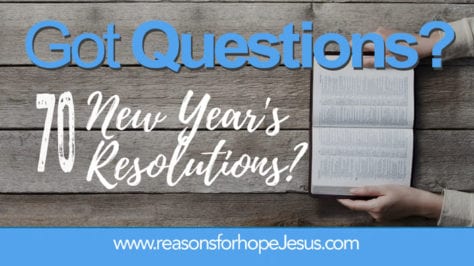 Jonathan Edwards (1703–1758), pastor, theologian, missionary, college president, and prominent leader in the First Great Awakening, is long remembered for a great body of theological works that equip and encourage Christians even unto our day.  Many have benefited from his sermons, commentaries, books, and other writings.  One of my favorite quotes from Jonathan Edwards is about the importance of studying God’s Word.

All truth is given by revelation, either general or special, and it must be received by reason. Reason is the God-given means for discovering the truth that God discloses, whether in his world or his Word. While God wants to reach the heart with truth, he does not bypass the mind. ― Jonathan Edwards

In Romans 12:2, we are told to renew our minds and we do so by reading the Bible and meditating on what God reveals.  Thereby our thoughts, words, and actions will be directed by the Holy Spirit and we can strive to honor God in all we think, say, and do. Therefore, as Edwards wrote, we are to receive (revelation) and reason from the Bible, which will lead to resolving to live godly.

Jonathan Edwards started writing his resolutions at the age of 18 in the fall of 1722. Edward’s 35th resolution is dated December 18, 1722, and the 70th and last resolution is dated August 17, 1723. Having moved to New York City, a city of about 10,000 people in August of 1722.  It is supposed that he wrote these resolutions to commit himself to godly living in his new city.  Edwards wrote:

“Being sensible that I am unable to do anything without God’s help, I do humbly entreat him by his grace to enable me to keep these resolutions, so far as they are agreeable to his will for Christ’s sake.”

Read these Resolutions. You just might want to resolve to do many (or all) of them!

Inspiration for the New Year:

Not feeling in a celebratory mood?  Remember, you are not alone.  Read this article & watch the short video.