A Split-second Choice: Gorilla or Child? 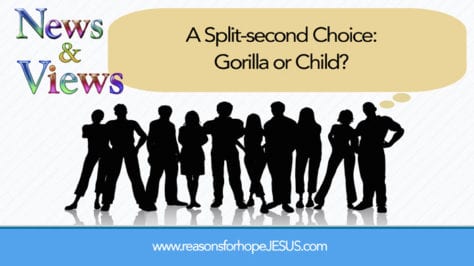 By Heather Stauffer for Reasons for Hope* Jesus

Memorial Day is a holiday set aside one day out of the year when we look back and reflect upon and honor those who have selflessly sacrificed their lives for our freedoms. Over one million brave American military men and women have died in battle either on American soil or overseas, thus paying the ultimate sacrifice to ensure that we may continue to have the freedoms and liberties offered by no other country on earth. One day of remembrance serves only as a very small token of our appreciation. This past Memorial Day, a group of people gathered together in Cincinnati, Ohio to hold a candlelight vigil to pay their respects and reflect upon the life of another hero: Harambe.

Many of his supporters and friends who couldn’t make it to his vigil made sure that they paid their respects via social media. I’ll just quote one of the MANY comments posted on his “Justice for Harambe” Facebook page: “Shooting an endangered animal is worse than murder. Soo angry!!” Yes…dear heartbroken human, your words clearly sum up your hero and friend. He was an animal. Sadly, Harambe is getting pretty close to the same amount of attention that the twenty children along with six adults received when a crazed gunman prematurely snuffed out their innocent lives at Sandy Hook elementary.

For those of you who might be unaware of the situation, Harambe was a male silverback gorilla that was shot and killed after zookeepers believed him to be endangering the life of a four-year-old child that fell into his Cincinnati Zoo enclosure. Many have argued that the gorilla was only acting out in a frenzy caused by the screams of the horrified bystanders when he dragged the child around. I’m not dismissing this assumption at all, but evidently his actions warranted the need to take the drastic measures that zookeepers took in order to protect the child’s life. Due to his massive size, the tranquilizers would not have taken effect until up to ten minutes or more, so a decision was made to end Harambe’s life. Since that tragic event, over 138,000 signatures have been collected on a petition in hopes that his killers will eventually be brought to justice, multiple social media pages have been set up in his honor, and Memorial Day vigils were held for him in more than one American state.

I could understand how this could be considered a crime to some animal lovers and animal rights advocates. If you are one of them, here are some examples to make you feel better about wild animals who survived similar ordeals. Consider the story of two-year-old Maddox Derkosh who was mauled to death when he fell into the African Wild Dog enclosure at the Pittsburgh Zoo. All but one of the nine dogs made it out alive. If that doesn’t lighten your spirits, this story is sure to do the trick. In 2007, a pack of eight wolves attacked TV Naturalist Arne Weise at the Kolmarden Wildlife Park in Sweden.  Arne managed to survive and thankfully all eight wolves did too. In 2012, this same pack of wolves attacked and killed the zookeeper that had been around them since they were puppies. Due to the wolf pack’s aggressive nature over their kill, it took some time before the authorities were able to retrieve what remained of the body. Once again, all eight wolves survived. There are many more of these heartwarming stories out there, but these two should suffice for the animal rights activists.

One of the most prevalent arguments in Harambe’s case refers to the so-called negligence of the parents. Many have said that if the parents had been properly supervising their child, he would never have gotten away from them and into the enclosure. Since I was not there that day to witness what took place, and neither were a lot of other people for that matter, I’ll pass on giving advice to the parents on how to raise perfect children. Just this past week, however, I read a heartbreaking story about a toddler who was accidently backed over by a car driven by a family member and killed instantly.  The community came together in expressing their condolences to the grieving family and had nothing but kind words for the parents. Not one person expressed negative or hateful words towards them, and I didn’t read any comments about the parents not properly supervising their child. We hear sad stories just like this one ALL of the time. Are these all simply negligent parents? No! A child can disappear out of sight for just a few moments and tragedy can strike. Make no mistake; these types of freak accidents can take place at any moment and can also happen to anyone’s child.

If you want to talk about REAL negligent “parents”, think about the countless number of children who are murdered each year at the hands of abusive parents, or parents who sell their children into sex trafficking. Many young girls, some even as young as ten years old, will be given away in marriage to perverted old men in the Middle East and other countries. I’ve read stories about parents who have tried to kill themselves and their children after finding out that they would no longer receive welfare checks, or those who leave their children home alone while they go out and party all night. Today, there are numerous accounts of mothers who murder their own children if they feel that they are standing in the way of a potential relationship with a man who isn’t interested in having kids. This is not to mention the millions of unborn babies who are lost every year to abortion. It’s quite disturbing to me that so many people would feel hatred towards a mother whose child escaped from her at a zoo, than feel hatred towards those who brought children into the world only to completely disregard their child’s entire existence. When did we become more concerned about an endangered gorilla than those millions of children who lives are endangered everyday by the very same people who brought them into this world.

For those of you thinking that I’m a cold, heartless, ignorant human devoid of any compassion towards animals please know that I’m quite the opposite. I’ve been around animals since as far back as I can remember, and I’ve also worked at multiple vet clinics over the years. I have had animals all of my life, ranging from hamsters to horses, with the majority of my pets being rescue cases. My heart breaks and I do get angry when I see animals abused or those whose owners could care less about them. Despite the anger I felt and still feel in my heart about these situations, I’ve never lost sight of the fact that these are indeed just animals.

The Bible says in Genesis 1:26 “And God said, Let us make man in our image, after our likeness: and let them have dominion over the fish of the sea, and over the fowl of the air, and over the cattle, and over all the earth, and over every creeping thing that creepeth upon the earth.” God gave man dominion over the animals…not vice versa. When God flooded the earth, He saved alive six human beings but just two of each species of animals. Before Jesus Christ came to earth to become the ultimate sacrifice for our sins, God required the blood sacrifice of animals for the forgiveness of sins. What does that reflect concerning God’s character and priorities? I’d say God elevated the humans. Human beings have a soul, but animals, not just spiders, snakes, and scorpions, but ALL animals, including mine, do not have a soul. I don’t speak for God, so I’m not going to say for certain whether you will see your pet that passed away in Heaven again one day. However, it is unfathomable to think that God would send those who refused to accept Him as their Saviour to spend an eternity in Hell, but allow your family pet that possesses no soul to enter Heaven.

I remember finding it quite humorous that the Egyptians used to worship cats and other animals back in the ancient times (cats have not forgotten this either); yet have we ever stopped to notice that we are doing the same type of thing…if not worse? When did our priorities become so out of kilter? Think of all of the soldiers who gave lives for us to live in a free nation, and this is how we repay them? The one day set aside for their memory has now become a day to remember a primate.

Never lose sight of the fact that no matter how much our animals mean to us now, they never have the potential to one day find the cure for cancer, or to save our lives in the ER. Animals will not teach our children in school, nor will they do something that could potentially impact the world for good, and so much more. We cannot continue to express our disgust about why our world is heading the direction that it is heading while we hypocritically elevate the lives of animals over people.  They are pets who will be gone from your life one day and be replaced by a new one the next. Never cease to forget that our fellow human beings and children can never be replaced. Please take a stand for the lives that will matter for all of eternity.

“There is a healthy and an unhealthy love of animals: and the nearest definition of the difference is that the unhealthy love of animals is serious. I am quite prepared to love a rhinoceros, with reasonable precautions: he is, doubtless, a delightful father to the young rhinoceroses. But I will not promise not to laugh at a rhinoceros. . . . I will not worship an animal. That is, I will not take an animal quite seriously: and I know why. Wherever there is Animal Worship there is Human Sacrifice. That is, both symbolically and literally, a real truth of historical experience.” — G. K. Chesterton

Read this week’s Power of Hope, CS Lewis Proclaimed There is No Other Way