CS Lewis Proclaimed There Is No Other Way 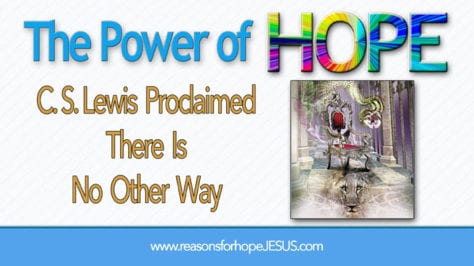 Those are powerful, life-revealing words that proclaim the truth of God’s salvation for mankind.  There is only one way and it is Jesus.  Many religions claim another way, or another god, and secular humanism proclaims a destiny of man that is grounded in this world alone. But since the beginning of time there has alway been only one way.

From the time of the fall in the Garden, the God of all creation began revealing His plan of redemption.  God offers restoration and relationship with Him to all who come to faith through Jesus.  Since the incarnation of Jesus and His earthly ministry, God has revealed that the only way to a personal and saving relationship with Him is through His Son, Jesus.

CS Lewis presented this truth in his fourth book in the Narnia series of children’s books.  In the book titled, The Silver Chair, a girl named Jill finds herself transported to a land, ruled by a lion named Aslan.  Because of her pride and foolishness, she finds herself stranded and alone in a strange forest.  As she cries about her situation, she becomes extremely thirsty and sets out in search of water.  Jill comes upon a stream, but as she approaches she encounters the mighty lion Aslan lying next to the stream.  With a powerful, thunderous, strong and wild voice—a heavy golden voice, as CS Lewis describes it—Aslan invites Jill to come and drink.

“Are you not thirsty?” said the Lion.

“I am dying of thirst,” said Jill.

“Then drink,” said the Lion.

The Lion answered this only by a look and a very low growl. And as Jill gazed at its motionless bulk, she realized that she might as well have asked the whole mountain to move aside for her convenience.

The delicious rippling noise of the stream was driving her nearly frantic.

“Will you promise not to — do anything to me, if I do come?” said Jill.

“I make no promise,” said the Lion.

Jill was so thirsty now that, without noticing it, she had come a step nearer.

“Then you will die of thirst,” said the Lion.

“Oh dear!” said Jill, coming another step nearer. “I suppose I must go and look for another stream then.”

“There is no other stream,” said the Lion.

The mighty lion Aslan proclaimed, “there is no other stream.”  And the Lion of the Tribe of Judah tells us the same (John 14:6).

When Jesus taught some difficult things, many in the crowd left him and “walked with Him no more” (John 6:66). Jesus then turned to His twelve disciples and asked, “Do you also want to go away?” (John 6:67).  And Peter replied, ”Lord, to whom shall we go? You have the words of eternal life.  Also we have come to believe and know that You are the Christ, the Son of the living God.” (John 6:68-69)

We may not always understand what God is doing in our lives (as those who left Him, and as Jill when she was confronted by the mighty Lion), but when we draw near and trust Him (as the Lion invited Jill to do, and as Peter did by his profession) we will always find that Jesus is good and He is sovereign—and that He is an ever-present help in our times of need.  We are His, and, in Him, “we live and move and have our being.” (Acts 17:27-28)

That’s the freedom of the gospel.  Let the Lion roar! And may we always heed His call.  Let us trust and come close to Him, for He is good and offers us living water.  There is no other stream from which to drink.