Jesus wept. Why? And…it’s not the shortest verse in the Bible! 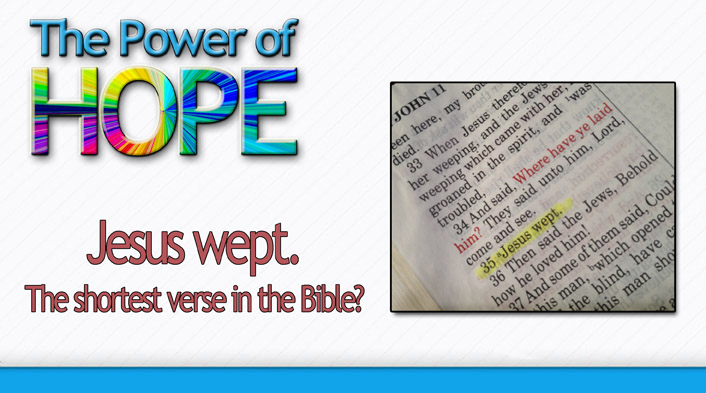 When I was a young child, my father would quiz me with this trivia question: “What is the shortest verse in the Bible?”  The answer was simple, “Jesus wept” (John 11:35). I always got it right, but still, my father would continue to ask the question from time to time.  I don’t remember how often he asked, or how many times, but I do know that it was enough so that I remember it being repetitive.  (Read to the end  of this article to find out the real shortest verse in the Bible.)

As an adult, I have often wondered why my father asked that question so often. I lost my father when I was only 21, so I’ve never been able to ask him.

Maybe there was a reason he liked that bit of trivia.   Perhaps the verse was his way of remembering Jesus was human, like us.  Or maybe it was his way of telling me that Jesus understood the pain of losing a loved one — and that it’s okay for me to cry.  Maybe still, that verse had told him, it was okay to cry in a time of grief.  I just don’t know.  I never asked. But what I do know is that we all weep, we all grieve, and that our Lord experienced the same depths of sorrow and sadness that we do. Therefore, Jesus is able to not only comfort us in our trials and tribulations but also in our sorrow and sadness.

In the John 11 passage, Jesus wept when He heard of the death of His friend Lazarus.  Of course, Jesus knew that He could, and would, raise Lazarus back to life, but He also knew of the pain and suffering that death brings to those who lose a loved one.  Death is a consequence of sin, and will always be a reminder that things on this earth are not as God intended them to be.  God gave Adam and Eve His perfect love, but they succumbed to their own lusts, and sin and death entered into the world. We weep when a loved one dies and Jesus wept when Lazarus died (John 11:35).  And the next verse tells of the depth of his sorrow, “Then said the Jews, Behold how he loved him!” (John 11:36)

Jesus loved His friend and He wept over sin and death.

In Luke 19:41, we are told that Jesus wept over Jerusalem.

God had given Adam and Eve a perfect Garden and perfect communion with Him.  When they sinned they lost everything. But God in His mercy and grace began preparing a way to rescue mankind.  He raised up a people and gave them a land that would be their own.  In that Promised Land was God’s city, Jerusalem, the city of peace.

God first gave His people a garden and next He gave them a city—a place to dwell, a city on a hill, shining as a light in the land of Israel.  And yet, in their disobedience, they failed to keep it holy and set apart for God’s purpose and plan.  In Luke 19:41 Jesus looked out upon God’s city, and, just as in times past, Jerusalem was now a city controlled by a pagan world power.

Jesus loved Jerusalem and He wept over the city.

In the Garden of Gethsemane, Jesus prayed to His Father, knowing what was soon to take place.  He was in extreme anguish and we read in the Gospel of Luke:

And being in an agony he prayed more earnestly: and his sweat was as it were great drops of blood falling down to the ground. (Luke 22:44)

Perhaps these were “tears” from the essence of His being.  But with such intense anguish, it’s likely these “tears of blood” were accompanied by tears flowing from His eyes.

We are the ones who should have hung on that cross.  Jesus was the only One who could take upon Himself our sin, pay the penalty for it, and secure forgiveness and eternal life for us.  He lived the life we could not live, and He died the death that we should die.  And in His life, Jesus experienced all the pain and suffering that we know. Therefore, when we weep, we can find refuge and strength in Him, and we can know that He is our very present help in all our troubles (Psalm 46:1).

“Written at the Foot of a Crucifix” by Victor Hugo

In 1847, Victor Hugo (1802-1885, author of the novel Les Miserables) wrote a short poem following the death of his beloved daughter:

As I think about my father at this time of year, I wish I could have known him longer and spent more time with him during my adult years.  It would have been fun to share with him a bit of trivia of my own.  I know he would have enjoyed it, but since he is not here (he has been in Heaven for many years now), I’ll share it with you.

In the original language of Greek, John 11:35 reads, “edákrysen o Iesoús”  with 16 Greek letters.  It literally means “Jesus shed tears.”  Another verse, 1 Thessalonians 5:16, in Greek reads, Πάντοτε χαίρετε with 14 Greek letters and is translated Rejoice evermore.  Therefore, while John 11:35 is the shortest verse in our English Bibles, it is not the shortest verse in the original language.

My God shall supply all your need according to his riches in glory by Christ Jesus.
Now unto God and our Father be glory forever and ever. Amen. (Philippians 4:19-20)
<*}}}><