1. Don’t Get Stoned Again!  A Stone in Genesis 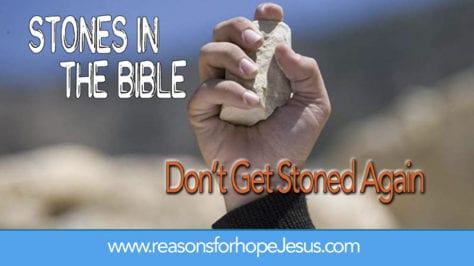 The title of this article could mean a lot of things. Some might think it’s a warning about using drugs (but it’s not).  Others might catch the wordplay on the song, “Won’t Get Fooled Again” (The Who, 1971).  But to ancient Israel, those words had a different meaning. They would have evoked thoughts about capital punishment. Stoning was lawfully imposed for specific offenses (sins) in Israel, and it was done with the intent to kill the person.  If anyone escaped death, the words, “don’t get stoned again” would have conveyed a message of admonition to “go and sin no more.”

Another Use of Stones

This is the first in a series of articles that will be a study of significant stones in the Bible.  We’ll “journey” through the Bible and “pick up” stones as we go.  Instead of stones to be used as a weapon of judgment and punishment, our “stones” will be stones of instruction.  The “stones” will “speak” to us (Remember Jesus said (in John 19:40) that the stones could cry out.) We’ll listen to what the stones have to “say” and we’ll learn some valuable lesson as we gather “stones” to create a stone memorial to the Lord.

Throughout the Bible, God used stones in special ways to grow His people in relationship with Him.  Our first stone is found in Genesis. It is the first mention of a stone in the Bible. It is a precious onyx stone, pure, and perfect, found in the Garden of Eden that God had prepared for and given to man.

Genesis 2:12  And the gold of that land [Havilah, a land in Eden] is good: there is bdellium and the onyx stone.

What Color is Onyx?

Onyx is a banded variety of the oxide mineral chalcedony. Agate and onyx are both varieties of layered chalcedony that differ only in the form of the bands: agate has curved bands and onyx has parallel bands. The colors of its bands range from white to almost every color (save some shades, such as purple or blue). Commonly, specimens of onyx contain bands of black and/or white. (https://en.wikipedia.org/wiki/Onyx)

So what color was the onyx stones on the High Priest’s ephod? Was it black? Black would represent sin.  White? White would be symbolic of righteousness.  Could the stone have been bands of black and white, representing both sin and righteousness in believers? Or was it another color?

The answer is, we don’t know what color the onyx stones on the ephod were, but we do know the color of another stone in the New Testament.

A Stone with a Name

It is a white stone that Jesus promised in His letter to the church at Pergamos, and, just as the onyx stones on the shoulders of the High Priest bore the names of the twelve tribes, Jesus spoke of this white stone on which the names of overcomers will be written.

Revelation 2:17  He that hath an ear, let him hear what the Spirit saith unto the churches; To him that overcometh will I give to eat of the hidden manna, and will give him a white stone, and in the stone a new name written, which no man knoweth saving he that receiveth it.

Now understand that we don’t exactly know the significance of the white stone upon which a new name is written, but we do have records of ancient Israel’s use of white stones that might give us a clue

Just as Joshua did as he was commanded to do, and set up a memorial of whitewashed stones (Josh 8:30-35), we also will gather “stones” (from the Bible) to create a memorial.  Our stone memorial will be a reminder of the precious promises of God and our hope in Christ until the day when we receive our white stone and our new name.

Take this first stone and place it as a foundation stone in the memorial we are going to build.
Stone 1:  A Stone and a Name—in Genesis and Exodus