9. A Stone of Remembrance in 1 Kings 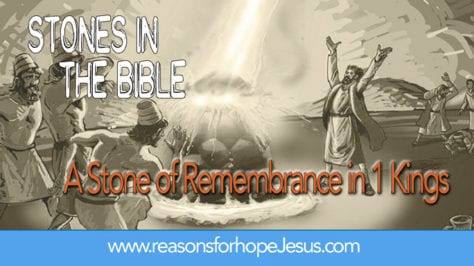 This is the ninth in a series of articles about stones in the Bible.  We know that stones were used as an instrument of capital punishment in Israel, but these articles consider stones in a different light.  Instead of a weapon of judgment, we will “pick up” stones that will be stones of instruction.  These “stones” will “teach” us and help us remember our God.

This stone is a stone of remembrance — remembrance of God’s power and provision.  In 1 Kings 18, we read of Israel having experienced three years of drought and famine and God’s promise to send rain upon the earth. Let’s start at the beginning of the account.

Because of the drought and famine, King Ahab had called Obadiah and sent him out to search for water and pasture for the mules and horses.  Do not confuse this man with the prophet Obadiah.   This Obadiah had important responsibilities in Ahab’s household and had a high official position as the king’s representative, but he was not a prophet of God.  He was, however, a believer in the God of Israel, and had hidden 100 prophets when Jezebel tried to kill all the true prophets.

In this account, Obadiah was commissioned with the work of feeding the animals, which were many.  Secular records suggest that Ahab had thousands of horses, so this would not have been an easy task during a time of drought and famine, and so both Ahab and Obadiah set out to seek water and pasture.

God had already spoken to the prophet Elijah and told him that to present himself before King Ahab and tell the king that God would give rain.  When Obadiah crossed paths with Elijah, Elijah sent him to tell Ahab that he was near and that he would appear before him that same day.  Ahab then went to meet Elijah and inquired of him, “Art thou he that troubleth Israel?” (1 Kings 18:17)  Elijah responded with the truth that Ahab likely did not want to hear.  He told Ahab that the trouble came from his own house and that of his father, because they had forsaken the commandments of the Lord and followed after the Baals (1 Kings 18:18).  Next, Elijah proceeded to set up a contest to expose the false prophets.

Elijah called for 450 prophets of Baal and 400 prophets of Asherah (a fertility goddess linked to Baal worship).  Ahab gathered them together at Mount Carmel, and Elijah then issued a challenge:

1 Kings 18:21-22  And Elijah came unto all the people, and said, How long halt ye between two opinions? if the LORD be God, follow him: but if Baal, then follow him. And the people answered him not a word.  Then said Elijah unto the people, I, even I only, remain a prophet of the LORD; but Baal’s prophets are four hundred and fifty men.

The challenge continued with a call for sacrifice.  The prophets of Baal would provide a sacrifice to their god and Elijah would sacrifice to his God.  It would be offered without building a fire.  Whoever (Baal or Jehovah) consumed the sacrifice with fire would be proven to be the stronger one and therefore the true God.

The prophets of Baal “called on the name of Baal from morning even until noon” (1 Kings 18:26), but Baal was silent.  Elijah mocked the prophets of Baal and told them, “Cry aloud: for he is a god; either he is talking, or he is pursuing, or he is in a journey, or peradventure he sleepeth, and must be awaked.” (1 Kings 18:27)  They responded by cutting themselves with knives until blood gushed out.

Elijah then repaired the broken down altar of the Lord:

1 Kings 18:31-32  …Elijah took twelve stones, according to the number of the tribes of the sons of Jacob, unto whom the word of the LORD came, saying, Israel shall be thy name: And with the stones he built an altar in the name of the LORD: and he made a trench about the altar, as great as would contain two measures of seed.

Elijah poured four barrels of water over his sacrifice and then did so a second and third time and the water ran down and filled the trench.  At the time of the evening sacrifice, Elijah called upon the name of the God of Abraham, Isaac, and Jacob and declared Him to be God in Israel. Elijah proclaimed that what he had done was according to God’s word.  Elijah then petitioned God to act so that all the people would know that He is God and that He had turned the hearts of the people back to Him again.

1 Kings 18:38-39  Then the fire of the LORD fell, and consumed the burnt sacrifice, and the wood, and the stones, and the dust, and licked up the water that was in the trench.   And when all the people saw it, they fell on their faces: and they said, The LORD, he is the God; the LORD, he is the God.

The prophets of Baal were proven false and their god was proven a false god.  The prophets were then executed and the God of Israel sent the rain He had promised.  (1 Kings 18:40-46)

Significant in this story of Elijah and the false prophets of Baal is the 12 stone altar that Elijah built.  The Israelites had wandered from God and forgotten Him.  These 12 stones might have been a reminder of the 12 stone memorial erected on the west shore of the Jordan River when the people of Joshua’s time crossed over into the Promised Land.  That 12 stone memorial there was to be a sign for the people that in generations to come would call to remembrance the might, power, and deliverance of their God.  Let Elijah’s 12 stones be a remembrance of the strength and might of our God displayed in his time and in our day.  God is all-powerful over false gods and false prophets. He is Sovereign over all of creation.

Take your Stone of Remembrance and add it to the memorial.