3. A Stone Covered Well in Genesis 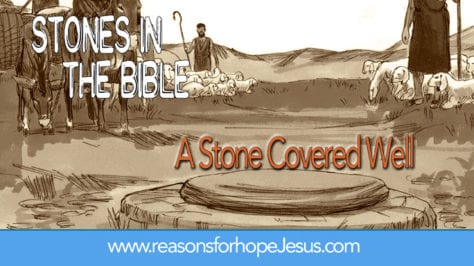 This is the third in a series of articles about stones in the Bible.  We know that stones were used as an instrument of capital punishment in Israel, but these articles look at stones in a different light.  Instead of a weapon of judgment, we will “pick up” stones that will be stones of instruction.  These “stones” will “teach” us and help us remember our God.

Stone 1:  A Stone and a Name—in Genesis and Exodus
Stone 2:  A Stone of Rest—a pillow of comfort in Genesis

A Stone Covered Well in Genesis

Last week, we considered the stone pillow that Jacob used to comfort his head while he slept.  When Jacob arose the next day, he continued on his journey, and “came into the land of the people of the east” (Genesis 29:1).  Jacob then encountered another, significant stone.  The stone covered the mouth of a well in a field with three flocks of sheep nearby (Genesis 29:2).

Genesis 29:1-2  Then Jacob went on his journey, and came into the land of the people of the east.  And he looked, and behold a well in the field, and, lo, there were three flocks of sheep lying by it; for out of that well they watered the flocks: and a great stone was upon the well’s mouth.

The stone had to be rolled away so the sheep could receive water.

The Shepherd and the Sheep

We know that sheep need a shepherd to guide and protect them and that points to our need for Jesus who is our Good, Great, and Chief Shepherd (Psalms 22, 23 and 24). We are His sheep.

Psalm 95:7  For he is our God; and we are the people of his pasture, and the sheep of his hand. Today if you will hear his voice…

Now, that verse clearly says we are His sheep, but it also says “today if you will hear His voice…”  and that is followed by a warning NOT to harden our hearts (Psalm 95:8).  In other words, we are to listen for His voice, His words to us.  Jesus assures us that He calls us by name and that He will guide us:

John 10:2-3  But he that enters in by the door is the shepherd of the sheep.  To him the porter opens; and the sheep hear his voice: and he calls his own sheep by name, and leads them out.

Water for the Sheep

The sheep that “harden not their hearts” will be given water at the well.  In Genesis 29, the mouth of the well was covered by a stone.  Only when the stone was rolled away, was water available for all three flocks of thirsty sheep.  This should remind us of another stone that covered a type of stone “well” for three days and three nights.  That “well” (tomb) held the Living Water from which man would drink and thirst no more.

Take this week’s stone and add it to memorial pillar.