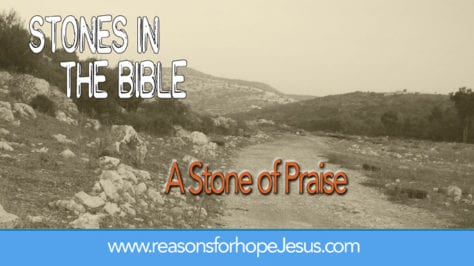 This is the tenth in a series of articles about stones in the Bible.  We know that stones were used as an instrument of capital punishment in Israel, but these articles consider stones in a different light.  Instead of a weapon of judgment, we will “pick up” stones that will be stones of instruction.  These “stones” will “teach” us and help us remember our God.

We’ve already gathered nine stones.  This stone will be number 10 and then two more will complete our 12 stone memorial.  This week, we will “pick up” a stone from along the road that led into the city of Jerusalem.

Jesus had sent His disciples to a nearby village and told them they would find an ass and a colt there. He told them to bring them to Him.  They were to tell anyone who questioned them that “the Lord has need of them.”

Luke 19:28-34  And when he had thus spoken, he went before, ascending up to Jerusalem. And it came to pass, when he was come nigh to Bethphage and Bethany, at the mount called the mount of Olives, he sent two of his disciples, Saying, Go ye into the village over against you; in the which at your entering ye shall find a colt tied, whereon yet never man sat: loose him, and bring him hither.  And if any man ask you, Why do ye loose him? thus shall ye say unto him, Because the Lord hath need of him.   And they that were sent went their way, and found even as he had said unto them.  And as they were loosing the colt, the owners thereof said unto them, Why loose ye the colt?   And they said, The Lord hath need of him.

Luke 19:28-34  When He had said this, He went on ahead, going up to Jerusalem.  And it came to pass, when He came near to Bethphage and Bethany, at the mountain called Olivet, that He sent two of His disciples, saying, “Go into the village opposite you, where as you enter you will find a colt tied, on which no one has ever sat. Loose it and bring it here. “And if anyone asks you, ‘Why are you loosing it?’ thus you shall say to him, ‘Because the Lord has need of it.'”  So those who were sent went their way and found it just as He had said to them. Luke 19:33  But as they were loosing the colt, the owners of it said to them, “Why are you loosing the colt?” And they said, “The Lord has need of him.”

The disciples did as they were instructed to do and they brought them to Jesus.  Jesus made His triumphal entry into the city of Jerusalem riding upon the donkey.  We call the day Palm Sunday.

We all know the story.  As Jesus rode into the city, He was hailed as King by the people.

Luke 19:35-38  And they brought him to Jesus: and they cast their garments upon the colt, and they set Jesus thereon.  And as he went, they spread their clothes in the way.  And when he was come nigh, even now at the descent of the mount of Olives, the whole multitude of the disciples began to rejoice and praise God with a loud voice for all the mighty works that they had seen;  Saying, Blessed be the King that cometh in the name of the Lord: peace in heaven, and glory in the highest.

When the Pharisees heard this, they told Jesus to rebuke His disciples, and Jesus answered:

Luke 19:40  … I tell you that, if these should hold their peace, the stones would immediately cry out.

There’s our stone.  “Pick up” one of these stones and add it to your stone memorial.  This is one of the stones that did not cry out.  Let it be a reminder that those stones did not need to cry out because the people hailed Jesus as King. But they could have cried out in praise of the King. Let this stone be a reminder of the praise due our Saviour and King. Take your Stone of Praise and add it to memorial pillar we are building.