7. A Stone of Deliverance and Memorial in Joshua 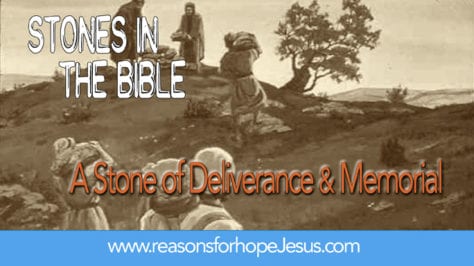 This is the seventh in a series of articles about stones in the Bible. It’s about a stone memorial on the shore of the Jordan.

We know that stones were used as an instrument of capital punishment in Israel, but this series of articles considers stones in a different light.  Instead of a weapon of judgment, we will “pick up” stones that will be stones of instruction.  These “stones” will “teach” us and help us remember our God. Throughout the Bible, stones have had great significance.  The past weeks we’ve covered:

Perhaps no stone memorial is as well known as the stones at Gilgal, on the shore of the Jordan—a memorial of 12 stones piled high to memorialize who God is and His deliverance of His people from the wilderness into the Promised Land (Joshua 4).

God gave clear instructions about how the river crossing would take place. With the waters parted, the priests were instructed to walk halfway across, carrying the Ark of the Covenant. They were to stop in the midst of the riverbed and allow the people to cross over to the other side on dry ground.  Typologically, this was an example of the Ark (representing God) going before them and hold back the waters (a symbol of God’s judgment). This safe passage into the Promised Land is symbolic of our safe passage into Heaven because we belong to Jesus who is our Ark and He withheld the flood of God’s judgment from us by taking it upon Himself on the cross.

A Memorial to Safe Passage and a New Beginning

God commanded that their crossing-over the river Jordan was to be memorialized with a memorial on the shore of the Jordan.  Once again it was to be a memorial built with stones.

God instructed Joshua that, when the people reached the other side of the Jordan, he was to appoint a man from every tribe (twelve men, Josh 4:2).  Each man would select a stone from the dry ground in the midst of the riverbed “where the priests’ feet stood firm,” (Josh 4:3).  They were to carry the stones to the shore and “leave them in the lodging place” (Josh 4:3) where they would spend the night.

Each of the twelve men carried a stone upon his shoulder and did as Joshua instructed.  Joshua explained to the people the reason for this:

Joshua 4:6-7  That this may be a sign among you, that when your children ask their fathers in time to come, saying, What mean ye by these stones?  Then ye shall answer them, That the waters of Jordan were cut off before the ark of the covenant of the LORD; when it passed over Jordan, the waters of Jordan were cut off: and these stones shall be for a memorial unto the children of Israel for ever.

This memorial of twelve stones served as a witness to God’s deliverance of His people.  The twelve stones were taken from the depths of the miry clay of the Jordan and placed on dry ground “where they lodged.”  In typology for our time, the twelve stones symbolize those who are redeemed by Christ (the Ark) and delivered out from the miry clay of the world, saved from the judgment of God (the waters), and given a new life in Christ in a new citizenship in a new land (Phil 3:20 — Heaven is our Promised Land).

Note that this took place at the time of the Passover, a “time of harvest” (Joshua 3:15).  What a beautiful picture of the saving grace of Jesus Christ.  The Joshua 4 stone memorial reminds us of God’s deliverance:

Take your Stone of Deliverance and Memorial and add it to the memorial pillar.

Psalm 40:2  He brought me up also out of an horrible pit, out of the miry clay, and set my feet upon a rock, and established my goings.

Isaiah 43:2  When thou passest through the waters, I will be with thee; and through the rivers, they shall not overflow thee.

Many will remember the warnings of danger that the Robot gave to Will Robinson while they were “Lost in Space” (a 1960’s TV show).

Another 12-Stone Memorial that You Have Probably Never Heard About