A Contradiction in the Bible? Was King David the 7th or 8th Son of Jesse? 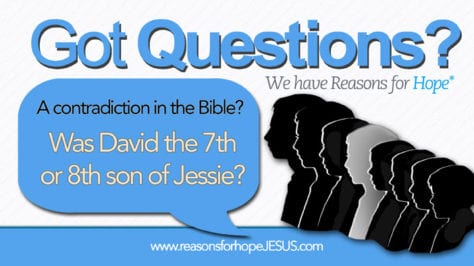 This is a favorite question of skeptics.  In 1 Samuel we are clearly told that David is Jesse’s 8th son, but a verse in 1 Chronicles seems to contradict this.  1 Samuel 16:6-10, records Jesse presenting his seven sons to Samuel.  When the Lord told Samuel that these seven were not acceptable to Him, Samuel asked Jesse if he had any other children.  Jesse told Samuel about David, his youngest, his eighth son.

David is also described as the youngest of eight sons in 1 Samuel 17:12-14

1 Samuel 17:12-14  Now David was the son of that Ephrathite of Bethlehemjudah, whose name was Jesse; and he had eight sons: and the man went among men for an old man in the days of Saul.  And the three eldest sons of Jesse went and followed Saul to the battle: and the names of his three sons that went to the battle were Eliab the firstborn, and next unto him Abinadab, and the third Shammah.  And David was the youngest: and the three eldest followed Saul.

So why, in 1 Chronicles 2, do we read of David being called the seventh son?  Both of these accounts agree that David was the youngest of Jesse’s sons, but was he Jesse’s seventh or eighth son?  Skeptics love to point this out and then claim that the Bible contradicts itself and therefore it can’t be trusted.  We know that isn’t true. And since we begin by believing the Bible and by trusting in God’s promise that His word is pure and preserved, we are able to find an answer to any skeptic’s accusations.

We start with what the Bible clearly states: David was Jesse’s eighth son.  That couldn’t be more obvious from 1 Samuel.  We then must wonder why 1 Chronicles lists only seven sons.  Note that it doesn’t say Jesse had only seven sons, it simply lists seven.  We can easily reason that the name of one of Jesse’s sons was omitted from the genealogy in 1 Chronicles.  So what might be reasons for why one son isn’t listed?

The book of 1 Chronicles is a record of the kings of Israel.  Chapter 1 is a genealogical table beginning with Adam and ending with the sons of Esau, who was the son of Isaac.  Chapter 2 begins with the second son of Isaac, Jacob. Remember, Jacob’s name was changed to Israel (by God) and Jacob became the father of 12 sons who became the tribes of Israel.

1 Chronicles 2:1  These are the sons of Israel; Reuben, Simeon, Levi, and Judah, Issachar, and Zebulun,  Dan, Joseph, and Benjamin, Naphtali, Gad, and Asher.

Chapter 2 continues in verse 3 by presenting the sons of Judah, the kingly tribe through which both David and the King of kings, the Lord Jesus, would be born. In verse 15 our apparent dilemma arises.

1 Chronicles 2:13-15 And Jesse begat his firstborn Eliab, and Abinadab the second, and Shimma the third, Nethaneel the fourth, Raddai the fifth, Ozem the sixth, David the seventh:

In 1 Samuel 16:6-9  only Jesse’s three oldest sons, Eliab, Abinadab, and Shimma, are mentioned.  However, verse 10 confirms that Jesse had seven sons who passed before Samuel, prior to David being brought before him. So five sons were not mentioned by name, including David.  So who were the other four?  David is listed in 1 Chronicles 2 and three of the other four sons.  This tells us that one name has been omitted.

Considering that Jesse presented his sons to Samuel around 1030 BC, and knowing from 1 Samuel 17:12-14 that David’s three oldest brothers served in Saul’s army at the time of the battle between David and Goliath around 1025 BC, it’s not unreasonable to think that David’s other four brothers served in Saul’s army also. It is certainly possible that one of the four brothers had been killed in battle. Therefore the seven names in 1 Chronicles are the names of those who were alive at the time the genealogy is recorded. Genealogical records were kept as a way to validate tribal identity and inheritance rights, so if one brother had died without leaving any children, there would have been no reason to include him at the time 1 Chronicles was written, around 450 BC.

These are legitimate reasons why one of Jesse’s eight sons would have been omitted from the genealogy in 1 Chronicles 2.  There is no contradiction between 1 Samuel 16:10 and  1 Chronicles 2:15, and there are very good explanations for it.

Be ready always with an answer for the questions skeptics might pose.  And if you do not have an answer, be quick to proclaim your trust in God’s Word. Be confident that you can, and will, find an answer and be able to respond. There are no errors in the Bible and there are no contradictions.  There are answers for every skeptic’s claim that the Bible is not worthy of our trust.  Contend for the truth and always point people to the Truth Giver, the Lord Jesus Christ.

An interesting afterthought about the 8th son.

Numbers in the Bible have great significance in pattern and typology.  Eight is understood to be the number of new beginnings (Read, The Meaning of Numbers in the Bible). Israel’s first king, Saul, started out well but ended poorly.  So God chose Jesse’s 8th son to be the new king and the new beginning for God’s people, Israel.  Under David the kingdom was united, and one day there will be another new beginning when Jesus returns.  When Jesus rules and reigns as King on the Throne of David, God’s children will be united.  Hallelujah, what a day that will be!

Another possible explanation:  1 Chronicles 2 mentions the sons of David’s sisters: Zeruiah and Abigal. These sons would have been the grandsons of Jesse.  And  grandsons in the Bible are sometimes called sons, so perhaps one of them, being called a son, passed by Samuel.