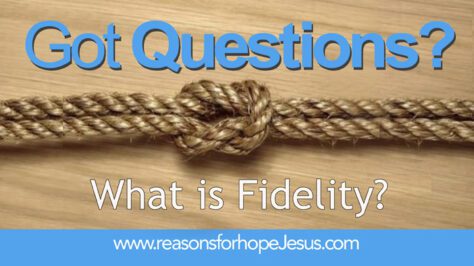 The word “fidelity” is not often used today.  We often hear of infidelity, especially in reference to a person being unfaithful to his or her spouse. But what about “fidelity?” It’s a word that we should fully understand and use.

Fidelity in the Bible

“Fidelity” is used only once in the King James and New King James Bibles:

Titus 2:10  not pilfering, but showing all good fidelity, that they may adorn the doctrine of God our Savior in all things.

The Greek word, that is translated “fidelity” in English, is “pistis.” It is defined by Strongs Dictionary (G3982) as persuasion, i.e. credence; moral conviction (of religious truth, or the truthfulness of God or a religious teacher), espec. reliance upon Christ for salvation; abstr. constancy in such profession; by extens. the system of religious (Gospel) truth itself:–assurance, belief, believe, faith, fidelity.

While “fidelity” is found in the KJV and NKJV, it’s not found in other translations. The English Standard Version and New American Standard Bible translate “pistis” as “good faith.” The New International Version uses “fully trusted.”  Others translate it as “trustworthy” or “loyal.”  All are acceptable translations, but I suggest that “fidelity” is a better one.

These three words are closely linked together, but they are not the same.  As Christians, faith is perhaps the most frequently used of the three words, but often without a full understanding.  So how should we understand faith?

I suggest that faith can be best understood in three parts. Think of it as a three-legged stool, in which all three “legs” are vitally important. Or perhaps most biblically, as a triune doctrine of a renewed mind. The great preachers of the Reformation defined faith in this way: 1) knowledge proceeding to 2) belief, and culminating in 3) trust. In this definition of faith, trust is the ultimate key that makes faith real and true.  Knowledge and believing are from the mind, but trust is from the heart. And trust moves a person to take action. Trust exemplifies one’s knowledge and belief. (Read:  What is Faith? How do I get it? How do I grow it?)

Real faith must always begin with knowledge, continue with accepting that knowledge as truth (belief), and be completed in affirming (trusting) the truth by words and actions.

Is the Word “Fidelity” Old Fashioned?

Many might think of “fidelity” as an archaic word.  And perhaps it has slipped from favor and is no longer commonly used.  However, it is an important word, with a meaning that can inspire and motivate. It’s a word worthy of our understanding. The 1828 Noah Webster Dictionary defines fidelity as:

1. Faithfulness; careful and exact observance of duty, or performance of obligations. We expect fidelity in a public minister, in an agent or trustee, in a domestic servant, in a friend.

The best security for the fidelity of men, is to make interest coincide with duty.

3. Observance of the marriage covenant; as the fidelity of a husband or wife.

4. Honesty; veracity; adherence to truth; as the fidelity of a witness.

Simply put, in a biblical context, fidelity is honesty, truth, faith, and loyalty ingrained and infused in one’s being and it generates actions consistent with God’s will and ways.  It truly does, as Noah Webster wrote, “make [one’s] interest coincide with duty.”

Do You Have Fidelity?

Noah Webster wrote: “We expect fidelity in a public minister, in an agent or trustee, in a domestic servant, in a friend.”

Although fidelity is expected, we live in a time when it is waning. Those entrusted with the gift of relationship, be it family, friends, employees, congregants, patients, clients, etc, all too often lose focus and lack concern for the needs and/or feelings of others. Fidelity is only present when we seek the good of others, even at our own expense.

So how do we achieve fidelity in our own lives?

It begins with renewing the mind and that includes knowledge of God and His word. It also includes believing God, which is not the same as believing in God. Believing God means accepting His word, His precepts, and His principles as true and worthy of directing our lives.  Believing in God is simply believing He exists. When we live believing God, we respond by trusting what we know, which is demonstrated by living in accordance to God’s will and ways. And that is living in fidelity, faithful to God and reflecting Jesus who is Truth.

Where are you looking? Whom do you trust? What directs your life? If you look unto God, believe Him, and trust Him, you will allow His teachings to direct your life.

1 Pet 1:8  whom having not seen you love. Though now you do not see Him, yet believing, you rejoice with joy inexpressible and full of glory,

We cannot see Jesus in the flesh, but we know, believe, and trust that He lives in us and through us. And we can see Him through faith and with our mind’s eye. Take a second and clear your mind of worldly problems. Think about the One who is “the way, the truth, and the life” (John 14:6).

You may have seen this before but it’s always fun to pause and see Jesus. So follow the three steps and you’ll “see” Jesus.