Are We Called to be Watchmen? 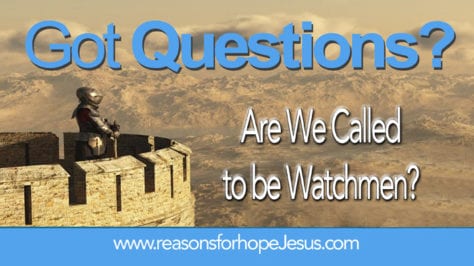 Yes, we are to be discerners of the truth. And we are to warn about false prophets. But do we really have the work of watchmen assigned to us in the Church?

Many might quickly answer “yes.”  But let’s consider what “watchmen on the wall” were in ancient Israel. And let’s consider if, and how, theis work might apply to us in the Church.

The Watchman on the Wall

Large watchtowers were erected around cities and in the fields of ancient Israel.  Watchmen were assigned to stand vigil in the towers. They would watch for threats of impending danger and would protect the city by informing the inhabitants of the arrival of those who might seek to harm them. They also protected the crops by watching for those who would seek to steal their harvest.

The watchman is described in these verses:

2 Sam 18:24  And David sat between the two gates; and the watchman went up to the roof over the gate unto the wall, and lifted up his eyes…

Hab 2:1  I will stand upon my watch, and set me upon the tower, and will watch to see…

What Did the Watchman Do?

The watchman’s job was to watch and report:

2 Sam 18:24-25  Now David was sitting between the two gates. And the watchman went up to the roof over the gate, to the wall, lifted his eyes and looked, and there was a man, running alone. Then the watchman cried out and told the king…

Prophets were also a type of watchmen. They “saw” impending dangers and judgments and were told to sound an alarm with a trumpet to warn the people:

Jer 4:5  Declare in Judah and proclaim in Jerusalem, and say: “Blow the trumpet in the land; Cry, ‘Gather together,’ And say, ‘Assemble yourselves, And let us go into the fortified cities.’

Hosea 8:1  Set the trumpet to thy mouth…

The Responsibility of the Watchman

God clearly defined what a watchman was to do and where he was to do it.

Ezek 3:17  “Son of man, I have made you a watchman for the house of Israel; therefore hear a word from My mouth, and give them warning from Me

The Consequences If the Watchman Failed to Fulfill His Duty

Ezek 3:18  “When I say to the wicked, ‘You shall surely die,’ and you give him no warning, nor speak to warn the wicked from his wicked way, to save his life, that same wicked man shall die in his iniquity; but his blood I will require at your hand.

We are the Bride of Christ, His Body, His Ambassadors, and so much more.  We should be very glad that we are not “watchman on the wall” (as Israel had) because the consequences of failing to fulfill one’s duty were severe.

While we are not called to be “watchmen on the wall,” that does not remove us from the responsibility of watching.  For Christians, false teachers and false teachings are serious threats to our personal “cities,” which would be our hearts, minds, and souls.  We must be watchful for such dangers.  And, we are to warn ourselves, and others too, so we can stand strong against anything, or anyone, who might draw us away from Jesus and His Word.

We are Watching for Something Better

While we are called to be watching and alert to deceptions, our focus is not to be on that which can harm us.  It is to be on Him who can save us, sanctify us, and sustain us.  The Bible is clear that our eyes are a window to the soul.  And, that for which we look and set our eyes upon, will influence our thoughts, words, and actions.  We are to be looking to Jesus and looking for His promises and blessings.

Heb 12:2  Looking unto Jesus the author and finisher of our faith;

The watchman on the wall in ancient Israel looked out upon the land. We look up to Heaven, awaiting the return of Jesus:

Luke 21:28  “Now when these things begin to happen, look up and lift up your heads, because your redemption draws near.”

Keep your eyes focused on Jesus.  Know that He hears from Heaven and watches over you.  We can be watchmen and warn of impending dangers. But we are not standing on a wall.  We are serving our King in the active duties of preaching the gospel and loving our neighbors. And we are always to be watching for His return.

Titus 2:13  Looking for that blessed hope, and the glorious appearing of the great God and our Saviour Jesus Christ;

But remember, as a Christian, our personal duty is to be that which God has called us to be:  the Body of Christ, the Bride of Christ, the Children of God, the Shepherd’s sheep, the Teacher’s disciples, the Master’s bondservants, the stones of God’s house, the workers in God’s field, the subjects of the King, the citizens of Heaven, and more.  We are to be looking UP — looking unto Jesus.

2 Cor 4:6  For God, who commanded the light to shine out of darkness, has shined in our hearts, to give the light of the knowledge of the glory of God in the face of Jesus Christ.

Sorrow and regret look back.
Worry and fear look around,
But faith and hope look up!