Is It Time to End the National Anthem? 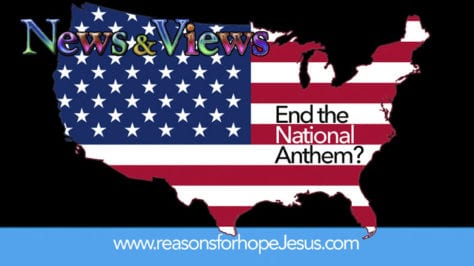 Granted, this nation has a short attention span and an even shorter memory, but it is time to focus and remember. I have always been proud to be an American but I’m not proud of what I see happening to America. This country desperately needs to be united but this usually only happens during times of war or a nationwide calamity. It has long been proclaimed that the United States of America will never be defeated by any invading military power. Likely, it will shamefully disintegrate from internal strife. It matters not who instigates the uproar whether communists, terrorists, leftists or the far-right. Unfortunately, the media seems to be simply stoking the self-destructive flames.

Why do true Americans pledge allegiance to the flag? The answer is really quite simple. The flag represents our united country of fifty states, in good times and in bad! Unfortunately, it seems that we may soon find fear of terrorism to be overcome by a fear of anarchy, strife and social unrest from within.

The National Anthem became a tradition in sporting events to focus people’s attention upon those who had served to ensure the freedoms we so richly enjoy. It started with baseball amongst those steeped in wartime patriotism.

Francis Scott Key wrote the Star-Spangled Banner two years after he witnessed a bloody battle between American and British troops in the Battle of Baltimore in the War of 1812. He wrote this poetic song as he saw the troops defend Fort McHenry in a day-long battle. The garrison flag that was raised over that blood-drenched fort is housed at the Smithsonian’s National Museum of American History.

Those with graying heads remember that not too long ago, some in this country chose to spit upon and curse those returning from battle (Vietnam). For many decades these heroes were forgotten by the country they served, nevertheless, most of them continued to love this country and show respect for it. My father is one of those men.

A lot has changed since 9/11 when America was attacked from without and stared into an uncertain future. On 9/11 things appeared to have suddenly spiraled out of control and the American people placed their hopes square upon the military. Americans—white, black, yellow, red, and brown—realized that we simply wanted a fix “over there” to stop any future attacks on American soil. I saw and witnessed the transformation of America where every Vet and service member was now honored and truly appreciated. As a Vet, I appreciated the newfound and long overdue respect for the military but still shuddered a bit when my son went to Iraq with the Marines.

A Nation of Diversity

This country is made up of people who do good and bad things to people of their own race as well as other races. A white man who shoots a person of color or a person of color who shoots a white man does not define a race of people. Yet, Colin Kaepernick, who began the NFL protests said this:  “I am not going to stand up to show pride in a flag for a country that oppresses black people and people of color.” If the vast majority of non-black American citizens do not oppress blacks and other people of color, his statement comes across as simply a racist statement.  Regardless of anyone’s intention, the result has been to show disrespect for our country and those who have served and died to defend it. Most players and coaches would never dream of showing the same kind of attitude toward an opposing team before the game.

If all of this is about free speech and the First Amendment (which it is not), then why did the NFL threaten to fine players who wanted to remember those who died on 9/11? Yet, a player can wear “pig socks” because an anti-police movement is acceptable in the NFL?  Why can’t the NFL stop the sitters and squatters, but they refuse the Dallas Cowboys’ request to honor the slain police officers with a simple helmet decal?

The real problem is political correctness and liberal agendas uniting to bring this country to its knees through racial strife, division, and hatred. Alejandro Villanueva, an offensive lineman with the Pittsburgh Steelers, standing alone during the Anthem and later apologizing is a great example. Why would a decorated Army Ranger who fought for this country feel compelled to apologize for standing rather than kneeling or skipping the anthem?

Why do people flee other countries to come to America? Because America is perfect? No, because we are the best country in the world even when we are being divided by those who fail to show respect for America. These players have the right to take a knee to make a statement.  Yet many of them think that those who criticize their actions have no right to do so.

End the Anthem at Sporting Events?

Now we are hearing that it may be time to end this once honored tradition of singing the National Anthem and honoring our service members at sporting events. Those of us who have served would rather see this hallowed tradition end than to witness the disrespectful actions of those who think their cause is more important than honoring our nation.

I do not think a boycott is best since it will disproportionately impact blacks who make up a majority of those playing in the NFL.  Racism in all of its many forms is despicable! But so also is this blatant anti-Americanism!

Dr. Douglas D. Stauffer is an internationally recognized authority in the field of Bible history and defense. He holds four degrees including a Th.M. in Theology and a Ph.D. in Religion from International Baptist Seminary.  Dr. Stauffer is a frequent guest speaker on radio and television. He has served for ten years in pastoral ministries and is the author of 17 books. Learn more about his ministry here.