Check Your Halloween Baggage At The Door 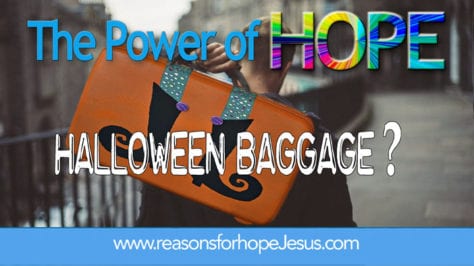 Halloween carries a lot of baggage. It is a very popular day (and now a season) that has become a very lucrative, commercially successful part of our culture. What is unfortunate is that Christians have allowed themselves to be caught up in a lot of Halloween’s festivities and observances that focus on the occult and things that God hates  (cf. Exodus 22:18; Deuteronomy 18:9-13; Galatians 5:20; Revelation 21:8; et.al.).

In the midst of embracing Halloween activities, we have lost sight of a most important event in the history of the Protestant church.

Check Your Baggage at the Door and Refocus

Set aside Halloween and refocus your thoughts. The last day of October is the anniversary of a most important event.  On October 31st, 1517, a Catholic monk named Martin Luther nailed ninety-five challenges to Roman Catholic doctrine on the door of the Catholic church in Wittenberg, Germany. He had hoped to start a dialogue on the subject of indulgences. Instead, his actions started The Great Reformation.

Martin Luther came to an understanding that true salvation is by grace alone:

Eph 2:8-9  For by grace are you saved through faith; and that not of yourselves: it is the gift of God: Not of works, lest any man should boast.

One writer has said, “The most critical question facing anyone is ‘How can I be made right with God?’ The answer to that question is the central issue that keeps the various expressions of Christianity apart.”

From Martin Luther, and others to follow, came the protestant creed that is foundational to the church:

• “Justification is by grace alone, received through faith alone, mediated to believing sinners through Christ alone, and recorded as final authority in the Scriptures alone.”

Persecuted for His Faith

Martin Luther was excommunicated for his position and branded a heretic.  He was brought before tribunals and commanded to recant of his teachings and writings, but he stood firm in the truths of Scripture. Though ordered to be put to death by the Roman church and the Emperor, Charles V, he was kidnapped and protected by Duke Frederick of Saxony who gave him asylum.   Luther poured his energies into translating the New Testament into German so the common man could understand God’s Word.  He completed this task in only 11 weeks and went on to write commentaries that explained biblical justification and stood in opposition to the Roman church’s doctrines.  Luther’s writings spread across Europe like a flood and what had begun, The Great Reformation, could not be stopped!

How is it that this great date in protestant church history, this time and its great men, have been so forgotten by the church and, in turn, captured by the devil?  Don’t let it be so.

2017 marked the five hundredth anniversary of the day when Martin Luther took a stand for biblical truth.  His courage proclaimed the sufficiency of Jesus’ grace in salvation and brought reformation to Christian doctrine.  With a biblical doctrine of salvation by grace alone through faith, Luther gave rest to weary souls.

Take time this month to focus on the foundational truths of Reformation theology.  Sign up for our emails and receive information and inspiration about how this one man changed the future of the world on October 31, 1517.