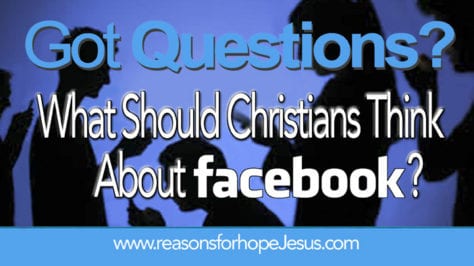 With the advent of the social media, seeking to belong has become a full-time obsession.  Facebook has created an online “world,” built by connecting with friends and family. In centuries past, however, connecting was centered on personal interactions.  Connecting required making time to meet in person, to make a phone call, or even to write a letter.  Today those interactions have been reduced to an email, a text, or even just a Facebook post.

While Facebook is certainly a way of connecting, and it’s clearly about sharing your life, it must be asked, is the platform healthy for interpersonal, relational, and spiritual growth?  Discerning the answer to that question is not so simple.  The value of Facebook (as with most things) is really determined by the user — how one uses it and to what extent it directs or controls one’s life.

Sadly, for so many people, Facebook has become an obsession.  It has become the place of belonging and the place to build one’s identity.  Facebook, above all social media platforms, has become a constant attraction that beckons and controls one’s attention. Sadly, it can also be a place of rejection and can do great harm to one’s perceived value and worth.

Before addressing what Christians should think about the world of Facebook, let’s consider the words of Facebook’s founding president, Sean Parker.  Parker, who was also the founder of Napster and is now the founder and chair of the Parker Institute for Cancer Immunotherapy, declared that Mark Zuckerberg knowingly created a “monster” using addictive social media designed to consume people.

On November 8, 2017, Parker spoke at the Axios conference at the National Constitution Center in Philadelphia and said:

“I don’t know if I really understood the consequences of what I was saying, because [of] the unintended consequences of a network when it grows to a billion or 2 billion people and … it literally changes your relationship with society, with each other … It probably interferes with productivity in weird ways. God only knows what it’s doing to our children’s brains.’

“The thought process that went into building these applications, Facebook being the first of them, … was all about: ‘How do we consume as much of your time and conscious attention as possible?’  And that means that we need to sort of give you a little dopamine hit every once in a while because someone liked or commented on a photo or a post or whatever. And that’s going to get you to contribute more content, and that’s going to get you … more likes and comments. It’s a social-validation feedback loop … exactly the kind of thing that a hacker like myself would come up with because you’re exploiting a vulnerability in human psychology.

“The inventors, creators — it’s me, it’s Mark [Zuckerberg], it’s Kevin Systrom on Instagram, it’s all of these people — understood this consciously. And we did it anyway.” ¹

Parker spoke words of truth when he said that only God knows what effect this platform will have, especially on the developing and impressionable minds of youth.  As Christians, we should clearly understand the dangers of a platform that will “… consume as much of [our] time and conscious attention as possible.” ²

As Christians, we know that our lives are to be governed by God, fueled by the love of Jesus, and directed by the power of the Holy Spirit.  We can only achieve godly direction in our lives if our minds are renewed by God’s Word and our attention is focused on the example of Jesus’ life, the teachings of Paul, and words of other New Testament writers.

What Should Christians Do?

Facebook has become a reality in our culture.  There’s no going back, so how one uses this social media platform must be discerned. For Christians, that means biblical discernment.  The Bible is clear that any kind of worldly platform (including all social media) is not to consume us (as Sean Parker said was purposed by the founders of Facebook).  We are to be consumed by a magnificent obsession — a heart and mind devoted to following Jesus.  (Read, What’s Your Magnificent Obsession?).

Consider the words from a song by the Christian band Building 429:

That certainly describes the online community of Facebook.  It’s not real. It’s not personal.  And it can’t fully satisfy the needs of a relational being who was created for intimate relationships — relationships grounded in time, presence, and verbal communication.

The song continues with the only true answer, ”All I know is I’m not home yet. This is not where I belong, “ and the only true remedy to the problems of this fallen world, “Take this world and give me Jesus!”  Turn from the ways of the world and look to Jesus (Heb 12:2).

Don’t let Facebook consume you and steal your joy.  I’m not saying you should abandon your online social media presence.  I’m simply saying that you should control it, rather than letting it control you.

Remember Facebook was created to consume you and, by consuming you, it will also conform you.  Almost 2,000 years ago, Paul warned about this:

Romans 12:2  And be not conformed to this world: but be ye transformed by the renewing of your mind, that ye may prove what is that good, and acceptable, and perfect, will of God.

Facebook can be used in a God-honoring way.  It can be a very effective tool to share your faith and to impact your online community of friends with God’s truth and the only real hope of mankind, Jesus!  Be discerning. Purpose to use Facebook in a way that honors Jesus and shares His love.

Use Facebook to preach the gospel of saving grace in Jesus
and the power of sanctifying grace from the Holy Spirit.

Connect with Reasons for Hope* Jesus on Facebook.  We share articles, pictures, and videos with apologetics information and inspiring messages of HOPE in Jesus. We post several times a week, not daily  or multiple times a day. Don’t let any social media consume you.  Be consumed, and be conformed, by God’s Word.  It will transform your life!!!  Make Jesus Your Magnificent Obsession