What is a Helpmeet? 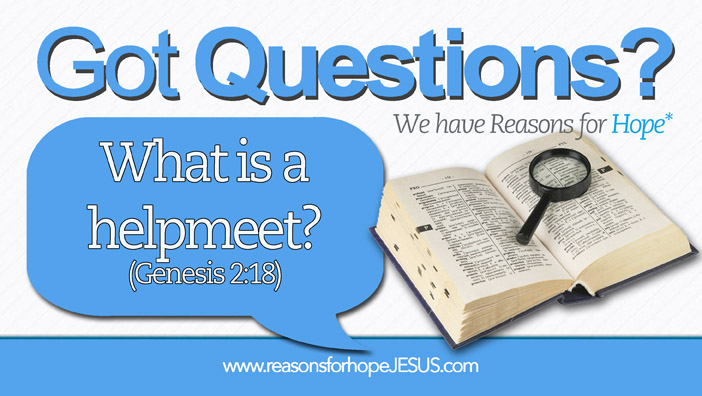 Q.  I’ve been told that Eve was a helpmeet to Adam and that wives are to be helpmeets to their husbands. What is a helpmeet?

A. The word “helpmeet” comes from the King James Version (KJV) of Genesis 2:18, in which God tells why He created woman.

Genesis 2:18  And the LORD God said, It is not good that the man should be alone; I will make him an help meet for him.

While there are clearly two words in the KJV translation of this verse, many Christians have joined the words together into one word, and they use “helpmeet” as a noun and as a title for Eve.  But is that correct to do?

In Genesis 2:18 the Hebrew word translated “help”  is ‘ezer or ay’-zer.  It means “aid or help.”  Many other Bibles translate this word as “helper” to describe both the person and the purpose of Eve.

The next word in Genesis 2:18, in the King James Bible, is “meet.”  This is the 1611 English translation of the Hebrew word “neged” (or neh’-ghed).  Strong’s Dictionary defines it as “a front, i.e. part opposite; spec. a counterpart, or mate; usually (adv., espec. with prep.) over against or before:–about, (over) against, aloof, far (off), from, over, presence, other side, sight, to view.”  Many Bible translations translate this word as “suitable” and the New American Standard Bible footnotes this word with, “Lit. corresponding to.”

(NASB) Genesis 2:18  Then the LORD God said, “It is not good for the man to be alone; I will make him a helper suitable for him.”

So why did the King James translators, in 1611, select the word “meet” in their translation of the Hebrew word “need?”  The 1828 Webster’s Dictionary provides the answer.  Many words in 1828 (and therefore previously in 1611) had a different meaning than they do in our day.  In 1828 the word “meet” was commonly used as an adjective, to imply suitable.

MEET, adjective [Latin convenio.] Fit; suitable; proper; qualified; convenient; adapted, as to a use or purpose.

The 1828 Webster’s Dictionary is a great resource.  It’s one all Christians should be familiar with and it is very beneficial in teaching children a Christian worldview.  Children must understand how our language has changed over the centuries and the influence of Christianity on past culture–much of which we are losing in our day.

The 1828 Webster’s Dictionary not only gives an understanding of words found in older Bible translations, but it also includes 1611 KJV Scripture in its definitions of the words.  Isn’t it interesting that in the early 1800s, God’s Word was used to instruct and teach?  Sadly, in our time, the Bible is banished from the classroom.

The following Scripture verses are listed along with the definition of the word “meet” in the 1828 Webster’s Dictionary. Note that in the context of these verses, the English word “meet” was used to imply “suitable for.”

Ye shall pass over armed before your brethren, the children of Israel, all that are meet for the war. Deuteronomy 3:18.

Do not jump to the conclusion that the KJV is wrong in its translation of “help meet” in Genesis 2:18.  The old-English language is NOT wrong, but it can be confusing to many in the 21st century.  Therefore, we must seek to understand it in the context of 1611, when it was written.

Additionally…regarding the use of the word “helpmeet” in our time, “helpmeet” is not really a word. Helpmeet is not found in the 1828 Webster’s Dictionary as a noun, and you won’t find it in academic dictionaries online.

Because the word has been popularized from the 1611 KJV, there are a couple online resources that define it as one word.  Note however that both define it as meaning a suitable helper and one declares it to be a “misunderstanding of the phrase…a helper suitable.”

dictionary.com — Origin of helpmeet: from the phrase an help meet for him i.e., a help suitable for him, in the Authorized Version of the Bible (1611)

thefreedictionary.com —  help·meet  (hĕlp′mēt′) n. A helpmate. [From misunderstanding of the phrase an help meet for him, a helper suitable for him (Adam), in Genesis 2:18, referring to Eve.]

We must clearly communicate God’s truths when sharing biblical knowledge.  Therefore, it is better to explain that Eve was created to be a helper for Adam, a helper who was suitable for him.  However, if you prefer to call Eve a “helpmeet,” explain what the word means.

Again, the KJV is not wrong.  Just remember that in 1611 some English words were used differently than today. There are many other examples of this. Be aware of how words have changed over the centuries so you are best prepared to explain and effectively share God’s Word with others.

Got Questions? We have Reasons for Hope* Jesus! 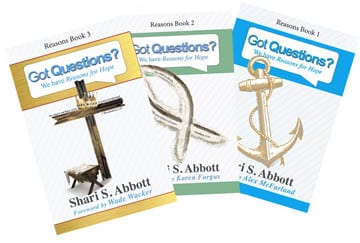 A great gift for any believer who wants to know Jesus better and love Him more.

Come now, and let us reason together... At Reasons for Hope we invite our community to ask questions.  Each book answers 30 of those questions with answers and reasoning from God’s Word.

All proceeds from products at the store support the ministry outreach of Reasons for Hope* Jesus.