The best eulogy to remember a father!

Father’s Day is a time to honor our dads.  Yet many do not have their fathers with them on Father’s Day.  Dads and children can be separated by death or by distance (physical or relational).  In my case, my father has been with the Lord for 38 years.

As I was thinking about Father’s Day, I thought about the ways in which we remember our fathers and a memorial service that I attended came to mind.  The service was for a man named Bob, who had lived a good and long life. The church was filled to capacity with many who held fond memories of him.  They had come together to celebrate his life… and also his death, because Bob is now with his Lord and Saviour.  I did not know Bob.  My husband and I attended to pay our respects and to express our condolences to our friend Scott, Bob’s son. But by the end of the service, I wished that I had known Bob.

Several people spoke during the service with Scott giving the final eulogy.  Scott’s words of tribute to his father were moving and inspiring, and I venture to say it was the best eulogy I’ve ever heard a son give.  He began by reflecting on his sisters’ words about their father, and he spoke about how they had captured their father’s life by recalling his sacrificial service to his country and community, his complete devotion to his family, and his rock-solid, unshakable faith in his Lord.  Scott shared a few more memories of his father, who he called “a very, very rich man of little means,” and then he proceeded to share his father’s last request with these words:

At the very end, my dad and I spoke often about his faith.  He knew where he was going and his last request was that I share his faith and certainty with you today.  He thought maybe one of you might be a bit worried or uncertain and might need to hear this.  So here it is…what my dad told me he wanted you to know.

God wrote an autobiography; His Word, His testimony.

He gave this Word to His chosen people, and they called it the Law.

The Law described the statutes and standards of God that defined God’s perfect truth, perfect nature and perfect thoughts and actions.

Now in possessing such a Law, God wanted men to realize that no man could be justified in keeping this Law; no matter how earnestly that man tried to keep the perfect demands.

Rather than justification, this Law was meant to teach man more about his frailties and failings than about his triumphs or successes.

Now God gave his chosen people a strange lesson to practice, over and over again, until the time would come when no more practice was needed.

It was an odd practice of substitutional atonement.

It involved an offering of a spotless, innocent lamb as a substitutional appeasement for the judgment of man’s failure against the perfect, unattainable standards of the Law of God.

That Lamb was known as the Passover Lamb because the judgment of God mercifully “passed over” all those who put their faith in the blood of that Spotless Lamb rather than on the pride of their own achievement.

My Pop wants you to know that he put all of his faith in Jesus, the Lamb that God provided so that no further Passover lambs would ever need to be offered again.

My Pop wants you to know that, just as the veil of the Temple was rent when the Lamb willingly laid Himself on the altar of the cross, he also was cut loose and set free by a renting, a circumcision of the heart.

My Pop wants you to know that he did nothing, nothing at all, to earn or deserve the gift of the Lamb.  He only needed to accept and believe.

Now, have you ever wondered if Abraham was crazy when he placed Isaac on the altar?

Was he a mad man, wanting to show a religious devotion so insane that he would sacrifice his child in some crazy ceremony demanded by a harsh and unloving god?

Well, my Pop wants you to consider this. . .

God had promised Abraham that through the seed of Isaac many great leaders and a nation of people would come.

When God asked Abraham to offer Isaac as a sacrifice, Isaac had no son.  He had no “seed” to fulfill the promise of God, and yet Abraham so trusted and believed in the promises of God that he had no fear of offering Isaac on that altar.  Abraham knew somehow God would resurrect, restore, or prevent the death of Isaac so that Isaac’s seed would be born and God’s promises would be fulfilled.

My Pop had that faith of Abraham; a faith upon which he would trust his own life and the life of his own son and his grandson.

So there it is–my eulogy; the simple story of a very, very rich man of little means.

With his closing words, Scott had summed up his father’s life.  He was not a man of great material wealth and yet he was a “very, very rich man.”  Bob had lived his life wealthy in the grace he had been given, the unsearchable riches of Jesus Christ, and now he is with Jesus in glory.

It was a beautiful memorial service.  Bob’s life had been remembered and his last wish had been fulfilled. It wasn’t his good works that Bob wanted people to remember.  It was his good God.  Christians and non-Christians heard about Bob’s God who is faithful and true and worthy of all our trust.  They heard about a man who lived his life loving and trusting God.  They heard about a man who left a legacy of faith and a testimony to his God.  That man was Abraham. . . and that man was Bob.

May the same be said of all of us when we leave this earth: “he (or she) loved Jesus and trusted in Him.”  May we always keep our eyes focused on Jesus and our hearts devoted to Him. And may we seize every opportunity to share His saving grace with others. 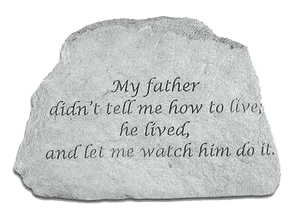