Does Abba Really Mean Daddy? Should we pray, “Father God”? 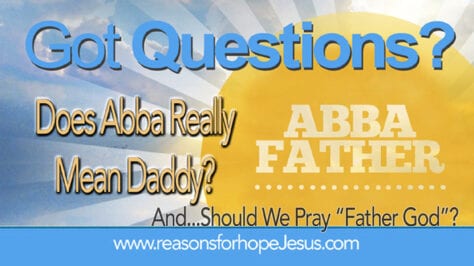 Abba is found in three verses in English Bibles. [“Holy is the Lord God Almighty” Video Below]

Mark 14:36  And He said, “Abba, Father, all things are possible for You. Take this cup away from Me; nevertheless, not what I will, but what You will.”

Rom 8:15  For you did not receive the spirit of bondage again to fear, but you received the Spirit of adoption by whom we cry out, “Abba, Father.”

Gal 4:6  And because you are sons, God has sent forth the Spirit of His Son into your hearts, crying out, “Abba, Father!”

It is often claimed that the word “abba” is equivalent to our English word “daddy.”  But, is that true? Were both Jesus and Paul saying “Daddy, Father” in reference to God our Heavenly Father?

We’re all familiar with the word “daddy” being used, especially by young children, as a more informal way to address fathers. In Europe, “papa” is commonly used. But is “daddy” or “papa” an accurate substitute for the word “Abba,” when used of God the Father?

To answer this, first note that the word “Abba,” in the books of Mark, Romans, and Galatians, is not a translation. Abba is the actual word, and it is defined by Strong’s dictionary in this way:

Clearly, in Strong’s definition, there is no indication of this word meaning anything other than “father.”

The idea that this word means daddy, or papa, is believed to have originated in the 1971 book, “New Testament Theology” by Joachim Jeremias (b1900-d1979).   As a scholar of the New Testament, Jeremias claimed that “abba” was “the chatter of a small child. . . . a children’s word, used in everyday talk” and seemingly “disrespectful, indeed unthinkable to the sensibilities of Jesus’ contemporaries to address God with this familiar word” (p. 67).

Note that while Jeremias said “abba” was the chatter of a small child, he did not suggest it was equivalent to “daddy” or “papa.”

Let’s look again at Jesus’ words in the book of Mark.

The Greek word pater, translated as “father,” is defined by Strong’s dictionary as:

These two words, abba and pater, mean the same thing. “Abba” was simply Jesus using the more commonly used word for “father” during His time.

It is fair to say that abba in Jesus’ time belonged to a family or colloquial register of language, as distinct from more formal and ceremonious language…. But in any case, it was not a childish expression comparable with daddy: it was a more solemn, responsible, adult address to a Father. (Page 46)

Barr added that this expression was used by children of all ages, from very young to older adult, during the time in which Jesus lived.

“If the New Testament writers had been conscious of the nuance ‘daddy’ they could have easily expressed themselves so: but in fact, they were well aware that the nuance is not that of ‘daddy’ but of ‘father’.”  … The semantics of itself [based on various evidences] all agree in supporting the nuance ‘father’ rather than the nuance ‘daddy’.” (Page 38)

New Testament Use of Abba

“Jeremias began almost at once to retreat from the claim that “abba” had the same connotations as “daddy.”. . . Even as Jeremias acknowledged that the word was in common use by adults and was used as a mark of repect for old men and for teachers, he continued to stress the origins in babytalk and the consequent intimacy as a special component of Jesus’ use of the word. This meaning seems to have been the basis on which he regarded Jesus’ use as absolutely distinct from the Judaism of his time.

The NT itself gives quite a different reading of abba. Each of the three occurrences of abba in the NT is followed by the Greek translation ο πατερ, “the father.” This translation makes clear its meaning to the writers; the form is a literal translation — “father” plus a definite article. . . it is not a diminutive of “babytalk” form. There are Greek diminutives of father (e.g., παππας [pappas]), and the community chose not to use them.”

So why would Jesus have used the words “Abba, Father…”  Why would he have said, “Abba, Pater,” which really means “Father, Father,” when he simply could have said “Father”?  The Bible does not tell us.  But by sanctified reasoning, I suggest there are two possible reasons.

First, a possible reason for Jesus using both words lies in the Hebrew language and expressions.  In essence, Jesus was saying, “Father, Father all things are possible for you…”

Repeating something two times (or three times) is a very common technique for adding emphasis in the Hebrew language. While they were not speaking Hebrew at this time, many of their oral communication methods would still have been in practice. We see this technique of repetition for emphasis employed other verses also.

John 1:51  And he saith unto him, Verily, verily [truly, truly or assuredly, assuredly], I say unto you, Hereafter ye shall see heaven open, and the angels of God ascending and descending upon the Son of man.

Rev 4:8  And the four beasts had each of them six wings about him; and they were full of eyes within: and they rest not day and night, saying, Holy, holy, holy, Lord God Almighty, which was, and is, and is to come.

In John 1:51, Jesus used the same word twice to emphasize that the words that would follow were really true (or really, really true).

And in Revelation 4:8, the three-times use of “holy” reminds us of a superlative word in our language.  We can understand this to mean, “…they rest not day and night, saying, [Holiest] Lord God Almighty…”

In saying “Abba, Father,” (Mark 14:36), Jesus very well might have been using two different words for Father to emphasize that God really, really is our Father.

Another possible reason for the repetitive words “Father, Father” is based on the original languages.  The English word “Father” is translated from the Greek word “pater,” but the word “Abba” is an actual word originating from the Chaldean language (the area of Babylon where the Jews lived in captivity for 70 years). Strong’s Dictionary defines “abba” as:

Note that this Chaldean word derives from a Hebrew word (H1).

Again, notice that the Hebrew word here, “ab,” implies “father,” not something more diminutive, or informal, like “daddy” or “papa.”

Based upon understanding the word in the original language, it might have been that Jesus was using the word “Abba,” a familiar Chaldean word that derived from a Hebrew root word, to convey that God has been their Father from the call of the nation in Abraham, throughout their history, even during captivity by the Chaldeans (Babylonians).  By Jesus adding the word “Pater,” a contemporary Greek word, He might have been reminding them that God is still their Father.

We simply don’t know why Jesus used two different words, both of which means Father.

Abba is a beautiful and acceptable name for God, but always be certain that it is spoken with reverence and that there is no misunderstanding with the similar sounding word “Allah.”   Allah is not our God.

It has been popularized over the past decade to begin prayers with “Father God.” It seems to be used often, and even by some very good pastors and Bible teachers. While there is nothing really “wrong” with addressing God in this way, I suggest that it is not the best way to address our Heavenly Father.

While God is always more concerned with the intentions of our hearts than with the words of our mouths, we should always do our best to honor Him in every way.  Therefore, it might be better to refrain from using “Father God” as a title for God because His Word does not support it.  Furthermore, Jesus gave us examples of how to address God the Father:  “Father,” “Our Father,” and “Heavenly Father” are all supported by Jesus’ words when He said to His disciples:

After this manner therefore pray ye: Our Father which art in heaven, Hallowed be thy name. (Mat 6:9)

Whenever we address God, we should do so with a humble spirit and with reverence for His name.  He is holy, holy, holy, Lord God Almighty, and truly, truly (verily, verily) worthy of all honor and glory.