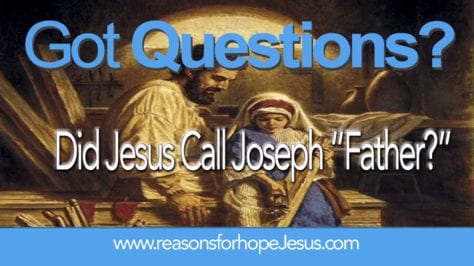 What did Jesus call Joseph?  The Bible provides no record of Jesus addressing Joseph in any way, and the only recorded uses of “Father” by Jesus are in reference to God the Father.  Jesus spoke of God the Father as “My Father” and He spoke to others about God as “your Father” but nowhere in the Bible is there a record of Jesus addressing His earthly father with the title of “father.”

Since the Bible does not answer this question, the only thing we can do is to use reasoning from the Word to consider how Jesus might have addressed Joseph.  I believe there are seven very good reasons that help us form a conclusion.

An example of this is found in the birth record of John the Baptist (Luke 1:60-63).  An angel appeared to Zacharias and told him “you shall call his name John” (Luke 1:13). When the time to name their son came Zacharias was unable to speak (Luke 1:20). The people wanted to name the baby Zacharias after his father, but Elisabeth spoke for Zacharias and told that the child was to be named John (Luke 1:60).

Likewise, an angel appeared to Joseph and told him to name the baby that Mary was carrying.  The angel said, “you shall call His name Jesus” (Matthew 1:21) and, as the Lord’s earthly father, Joseph gave the baby the name of Jesus.

Matthew 1:25  But he [Joseph] had no union with her until she gave birth to a son. And he [Joseph] gave him the name Jesus.

The genealogy in Matthew indicates that it was through the line of Joseph that Jesus had the right to inherit the throne of David as the King of the Jews.  The Davidic line was passed down through the sons of David, of which Joseph was a direct descendant through King Solomon.  Therefore Jesus was in the line of succession because Joseph was his legal father.  Although Mary was also from the Davidic line in the tribe of Judah, her lineage was not in the line of kingly succession through Solomon.  Mary was a descendant through Nathan, David’s second surviving son with Bathsheba.

Additionally, in the book of Luke, we find Mary’s genealogy and it records:

Luke 3:23 “Jesus…being (as was supposed) the son of Joseph, which was the son of Heli.”

The Greek word translated, “as was supposed” is nomizo. It also means “to do by law” or “to reckon by law.”  So we understand Luke 3:23 to say that Joseph was (by law) the adopted son of Heli (Mary’s father) and the adoptive father (by law) of Jesus. (For more information about the genealogies in Matthew and Luke, read, Why are there two different genealogies for Jesus?)

Reason #3)  The custom of other children in first-century Israel who had step-fathers or adoptive fathers.

In our time, some children casually call their birth parents, step-parents, or adoptive parents by first names.  That would not have been the case in the first century.  It would have been a sign of disrespect and dishonor.  God’s command children to “honor thy father and thy mother” — a command that is repeated eight times in the Bible.  Therefore, it is very likely Jesus would have honored Joseph by calling him “father.”

Since this statement recognized Jesus as the carpenter’s son, the carpenter was His father.  Most would not have understood that Joseph was not a biological father.

Reason #5) Jesus had other siblings and it’s likely they called Joseph, “father.”

It’s believed that there were seven children in the family of Mary and Joseph.  That’s based upon counting six siblings in this verse:

This verse tells that there were four brothers and at least two sisters.  If there were no more than two sisters, by including Jesus, that means the family had seven children–a number that signifies completion throughout the Bible.  That’s interesting, but remember it’s not known to be a fact. It’s just simple reasoning which could be right but could also be wrong. However, the point being made is that all of the other children in the family would have called Joseph “father,” so it’s very likely Jesus did also.

In this passage, the Bible speaks of Joseph as being Jesus‘ parent and in verse 48 Mary referred to Joseph as Jesus’ father.

Luke 2:41-47  Now his parents [plural, Mary and Joseph] went to Jerusalem every year at the feast of the passover.  And when he was twelve years old, they went up to Jerusalem after the custom of the feast.  And when they had fulfilled the days, as they returned, the child Jesus tarried behind in Jerusalem; and Joseph and his mother knew not of it.  But they, supposing him to have been in the company, went a day’s journey; and they sought him among their kinsfolk and acquaintance.

And when they found him not, they turned back again to Jerusalem, seeking him.  And it came to pass, that after three days they found him in the temple, sitting in the midst of the doctors, both hearing them, and asking them questions.  And all that heard him were astonished at his understanding and answers. (48)  And when they saw him, they were amazed: and his mother said unto him, Son, why hast thou thus dealt with us? behold, thy father and I have sought thee sorrowing.

Parents, throughout the Bible, means mother and father.  Also, since Mary referred to Joseph as Jesus’ father, it’s reasonable to think that Jesus would have called him father.

Romans 8 tells us that we are adopted into the family of God and that we are joint-heirs with Christ.  We are God’s children and therefore we call Him, Abba, or Father. It would be dishonoring for us to reject our privilege to call God “Father” after He has so graciously adopted us into His family.  The same would have been true for Jesus.

Joseph graciously adopted Jesus as his own, and a first-century Jewish child (adopted, step-children, and biological children) called their male parent “father.” It is reasonable to think that Jesus did the same as a way to honor the man who was chosen by His heavenly Father to be His earthly father.

We’ve just looked at seven reasons why Jesus would have called Joseph, father.  That should be enough, but I want to add one final thought.  If Jesus had not called Joseph “father,” what would He have called him?  Joseph?  Husband of my mother?  Joe?  Any name other than father would have been dishonoring. There’s a verse of warning about this in Proverbs:

Proverbs 20:20  Whoso curses his father or his mother, his lamp shall be put out in obscure darkness.

The word “curse” in Proverbs 20:20 does not mean what we might think it does. It’s not uttering offensive words or invoking harm to come upon someone, as “curse”  is used to imply in our time. It means to treat lightly or to slight.

We know that Jesus would have spoken directly to Joseph and we know that He would have had to use a name or title in addressing Him.  For the seven reasons listed, and because of the Bible’s warnings about not honoring father and mother (there are many), I believe that Jesus called Joseph, “father.”

Noe, some might think that Jesus’ words, “call no man your father upon the earth: for one is your Father, which is in heaven” (Mat 23:9) suggest that He would not have called Joseph “father.”  However, in that verse, Jesus is speaking about religious leaders, not a person’s male parent.  It still is reasonable to think that “father” was used by Jesus as a title of endearment, honor, and respect for Joseph.

This is simply reasoning from the Scripture and from what we know historically.  The Bible does not tell us what Jesus called Joseph. Why doesn’t it, you might ask?  Because it’s not really necessary for us to know how Jesus addressed his earthly father.  If God had wanted us to know for certain, He would have told us.

What God has told us is about the character and the faith of Joseph.

Joseph’s godly character is perhaps the best reason to believe that Jesus would have honored him by calling him, “father!”

On Father’s Day and every day,
when we honor our earthly fathers,
let us always remember the honor
and glory due our Heavenly Father.