Are you glad to see Jesus? – A Palm Sunday Devotion 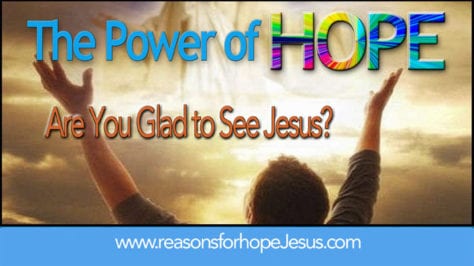 When our loved ones return home we are always glad to see them.  However, the extent of our joy is usually in direct correlation to how long they have been away—a few hours, a day, many days, a year…or longer.  The longer we wait for someone to arrive, typically the more excited we are to see them and the greater our joy in their return. That was true on Palm Sunday. The people got to see Jesus.

There was a jubilant atmosphere among the people of Israel on the first day of the week when Jesus rode into Jerusalem on a donkey.  The people had waited a long time for the promised Messiah.  Since the time of Abraham, they had longed to see their promised King, the Seed promised in the Garden and confirmed to Abraham–the Seed who would conquer their enemies and bless the nations (Genesis 22:17-18).

The King Who Came

For centuries Israel had awaited the coming of their King. But this King did not look as they would have expected.

This King was unlike any other king, and yet, when this King rode into Jerusalem on a donkey, He was hailed by the people.

The people expected a King and they hailed Jesus as King.  They expected the Kingdom of David to be re-established. But that’s not what they got.  It was what they wanted, but it was not what they needed.

Just What They Needed

Jesus had not come to be King of the land. He came to be the King of their hearts.  God’s plan was very different than what the people had hoped for. Their desire had been to have a ruler who would overcome Roman oppression.  One who would restore them to the dominion of their land and would give them rule over the surrounding nations.  That’s the King for whom they had been waiting. And one day, Jesus will come and He will be that King.  One day Israel will receive their full inheritance. But the day in which Jesus rode into Jerusalem was not that day.

When Jesus returns, He will come as the King of kings, the Lord of lords and He will rule and reign.  When that day comes, Jesus will come in judgment to judge the earth and all who live therein.  No one will want to stand before King Jesus on that day unless they are already covered by the blood of the Lamb.

When Jesus rode into Jerusalem on that Sunday afternoon, He began His journey to the cross.  The date was Nisan 10 on the Jewish calendar. It was the day in which the lambs were selected for the annual Passover sacrifice.  On Nisan 14, Jesus Himself became that sacrifice. Jesus was the perfect Lamb of God, and He became the Passover Lamb, sacrificed for the sins of the world.

Revelation 1:5-6 …Unto [Jesus] who loved us, and washed us from our sins in his own blood...to him be glory and dominion for ever and ever. Amen.

As we commemorate Palm Sunday, let it be a remembrance that we have seen our King and we have received our King according to God’s plan.  For all of us who have trusted in the perfect Lamb of God, and His finished work on the cross, our sins have been forgiven.  We have been washed in His blood (Revelation 1:5), we have been given His righteousness (2 Corinthians 5:21), and He reigns as King in our hearts.

Are you glad to see Jesus?  YES!  As you look to Him ponder the words of the psalmist:

For You, LORD, have made me glad through Your work; I will triumph in the works of Your hands. O LORD, how great are Your works! (92:4)

I will be glad and rejoice in thee: I will sing praise to thy name, O thou most High. (9:2)

Therefore my heart is glad, and my glory rejoices; My flesh also will rest in hope. (16:9)

Our sins are paid for and we belong to the King.  We are worthy to be included in His kingdom now and forever more ….and we are always glad to see Him.  As you look to Jesus on Palm Sunday and consider the beginning of His journey to the cross, remember:

As you walk through next week, remembering the Lord’s good work, look also for those who do not know Jesus.  Help them to understand the two-fold mission of God.  Jesus came first as the sacrificial Lamb and He will come again as the ruling King, the Lion of the Tribe of Judah.  No one will want to stand before the Lion without the blood of the Lamb covering them.

About Focusing Your Eyes on Jesus

Eph 1:18  the eyes of your understanding being enlightened; that you may know what is the hope of His calling, what are the riches of the glory of His inheritance in the saints,

***Lent: 40 Titles for 40 Days (Download NOW: 40 Titles for Lenten Devotions)
What is Lent? Should I Give Up Something? (Article and Video)
This Time Called Lent (Video)
Prepare for Lent (Video)
Lent Reflections (Video)
END_OF_DOCUMENT_TOKEN_TO_BE_REPLACED (Article)
END_OF_DOCUMENT_TOKEN_TO_BE_REPLACED (Reflect and Prepare short video)
Have You Sat At The Master’s Table? (John 13-17)