Obituary of Jesus: Body Stolen or Risen? What do you say? 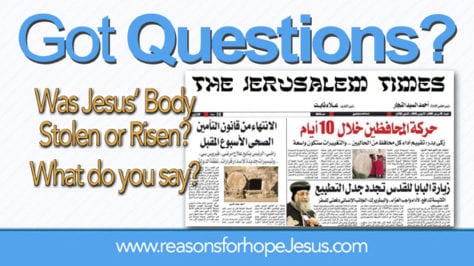 Jesus of Nazareth died Friday, Nisan 14 on Mount Calvary, also known as Golgotha the place of the skull. The cause of his death was loss of blood due to crucifixion that was preceded by severe torture.

Jesus was born in Bethlehem of Judea, the city of David. He was educated and well-learned in the Torah. At the age of 30 he began a public ministry as a Rabbi and taught about God. He called twelve men, mostly Galileans,  to help in his work.

The ministry of Jesus was based in Capernaum, but he traveled far and wide and preached about the coming Kingdom of Heaven and the Kingdom of God.  Jesus also worked as a doctor and a counselor. It’s reported that he healed many people of various diseases, including leprosy.  It has also been reported that he raised several people from death.  Many have testified that he performed miracles and that he was known to speak kind words and to be loving and gracious to people from all walks of life.

Until the time of His death, Jesus ministered to others by preaching good news to the poor, healing the brokenhearted, proclaiming liberty to the captives, giving sight to the blind, and setting the oppressed free.

Although Jesus had a large following, he was also very controversial.  He claimed to be the Son of God, the promised Messiah, and some have reported that he claimed to be God.  Jewish authorities were vigilant in confronting him and questioning his claims.  It was because of these claims that he was arrested.

Judas Iscariot, one of Jesus’ followers, aided officials in arresting Jesus.   It’s reported that Judas received 30 pieces of silver for leading the authorities to the Garden of Gethsemane last night. Jesus was found there with 11 of his followers and he was arrested.  His followers fled. It’s been reported that Judas regretted his involvement in the arrest of Jesus and tried to return the money.  He later killed himself.

Following his arrest, Jesus was tried by Roman and Jewish officials. Roman Governor Pontius Pilate publicly stated that he found little to condemn Jesus to death. However, when he offered the customary Passover prisoner release, the people chose Barabbas to be released and cried out for Jesus’ crucifixion.  Governor Pontius Pilate issued the order and Jesus was taken to Golgotha, outside the city, to be crucified yesterday afternoon. Pilate ordered the titlon above his head be inscribed with “Jesus of Nazareth King of the Jews,” which angered the Jewish officials.

Jesus died at 3 pm yesterday, much faster than most crucifixion victims.  His body was released to Joseph of Aimathea, in whose tomb the body was laid.  This was done in accordance with the law prior to the beginning of the Holy Day of the Feast of Unleavened Bread. Pontius Pilate secured the tomb with a large boulder and ordered Roman soldiers to stand guard.

Jesus of Nazareth is survived by his loving mother, Mary, his brothers James, Joses, Judas, and Simon, and at least two sisters. His father, Joseph of Nazareth, preceded him in death. Jesus is also survived by a number of faithful followers, including the 11 apostles who worked with him over the last 3 ½ years to teach and preach about God.

Jesus’ body will be anointed by several women on Sunday morning, after the Sabbath.  Friends can gather to pay respects later that day.

Body of Jesus of Nazareth is Missing; Stolen or Risen?

Earlier today, the body of Jesus of Nazareth was reported to be missing from tomb in which it was laid three days ago. Jesus died on Nisan 14 by crucifixion and was buried before sundown on that day,

The report of the missing body was made by the Sanhedrin and confirmed by the Roman officials. The initial investigation states that the massive stone securing the tomb was rolled away and the body was removed while the guards slept.

There are also rumors circulating that claim Jesus of Nazareth rose from the dead. Witnesses have testified to having seen angels at the tomb one of whom told them that Jesus had risen to life.  These rumors of having seen Jesus are circulating fast.  They were substantiated by two men who testify to having seen and spoken with Jesus on the road to Emmaus this afternoon.

An investigation continues.  Roman and Jewish officials are searching for the missing body to dispel the claims or resurrection and to quiet Jesus’ followers who are now re-gathering.  The official statement from Roman and Jewish officials is that the body of Jesus of Nazareth was stolen by his followers.  This claim can only be proven accurate by producing the body of the deceased.

Of course the above is not a real newspaper report from 33AD (the printing press wasn’t invented until the 15th century).  However, it is based on both biblical and historical accounts. So, what do you say?

Was the Body Stolen?

The claim that His body was stolen was raised by the Jewish officials:

Mat 28:11  Now while they were going, behold, some of the guard came into the city and reported to the chief priests all the things that had happened.

Mat 28:12  When they had assembled with the elders and consulted together, they gave a large sum of money to the soldiers,

Mat 28:13  saying, “Tell them, ‘His disciples came at night and stole Him away while we slept.’

Mat 28:14  “And if this comes to the governor’s ears, we will appease him and make you secure.”

Mat 28:15  So they took the money and did as they were instructed; and this saying is commonly reported among the Jews until this day.

The reports of the risen Christ were substantiated by eyewitness testimony.  Jesus appeared to many, including”

WHICH DO YOU BELIEVE?

***Lent: 40 Titles for 40 Days (Download NOW: 40 Titles for Lenten Devotions)
What is Lent? Should I Give Up Something? (Article and Video)
This Time Called Lent (Video)
Prepare for Lent (Video)
Lent Reflections (Video)
END_OF_DOCUMENT_TOKEN_TO_BE_REPLACED (Article)
END_OF_DOCUMENT_TOKEN_TO_BE_REPLACED (Reflect and Prepare short video)
Have You Sat At The Master’s Table? (John 13-17)