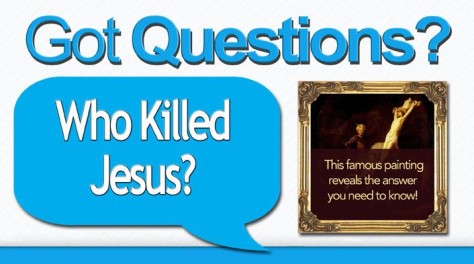 Throughout the centuries, this question has been asked.  Who was responsible for the death of Jesus?  This is a question that all people must answer, and it’ll surprise you when we find the answer to this question in a very famous painting by the Rembrandt.  But before we look at Rembrandt’s painting,  but let’s first turn to the Bible to find out what God has told us about the day of crucifixion.  What took place that gives us clues to answer, “who killed Jesus?”

Jesus was betrayed by Judas, one of His followers.

Luke 22:47-48  And while he yet spake, behold a multitude, and he that was called Judas, one of the twelve, went before them, and drew near unto Jesus to kiss him.  But Jesus said unto him, Judas, betrayest thou the Son of man with a kiss?

The Jews denied Jesus and both Peter and Paul said they killed Him.

On the day of Pentecost, after healing a lame man, Peter said…

Acts 3:12-15  …Ye men of Israel, why marvel ye at this? or why look ye so earnestly on us, as though by our own power or holiness we had made this man to walk?   The God of Abraham, and of Isaac, and of Jacob, the God of our fathers, hath glorified his Son Jesus; whom ye delivered up, and denied him in the presence of Pilate, when he was determined to let him go.  But ye denied the Holy One and the Just, and desired a murderer to be granted unto you;  And killed the Prince of life, whom God hath raised from the dead; whereof we are witnesses.

Paul in his letter to the church at Thessalonica wrote…

1 Thessalonians 2:14-15  …for ye also have suffered like things of your own countrymen, even as they have of the Jews: Who both killed the Lord Jesus, and their own prophets, and have persecuted us…

The group of men who came to arrest Jesus was composed of Roman soldiers, Jewish servants, and Judas:

John 18:12-13  Then the band and the captain and officers of the Jews took Jesus, and bound him,  And led him away to Annas first…

Jesus was tried in a Jewish court.

Although this court had no authority to execute a death penalty, Jesus stood before Caiphas in a Jewish court for judgment.

John 18:14  Now Caiaphas was he, which gave counsel to the Jews, that it was expedient that one man should die for the people.

Jesus was handed over to a Roman court.

When Jesus stood before Pontius Pilate in the Roman court, Pilate called together the chief priests, rulers and the people and said unto them:

Luke 23:13-16  Ye have brought this man unto me, as one that perverteth the people: and, behold, I, having examined him before you, have found no fault in this man touching those things whereof ye accuse him:  No, nor yet Herod: for I sent you to him; and, lo, nothing worthy of death is done unto him. I will therefore chastise him, and release him.

Because it was “of necessity” (Luke 23:17) to release a prisoner during the time of the Feast of Passover, Pilate offered to release Jesus, but in response, the Jews chose the release of another:

Luke 23:18 …they cried out all at once, saying, Away with this man, and release unto us Barabbas.

The Question Remains — The Answer is Clear

Since the first century AD, a debate has existed regarding who is responsible for the death of Jesus.  Was it Judas?  Was it the Jews?  Or was it the Romans? And of course, remember that it was the will of God the Father that Jesus went to the cross and died.

So who killed Jesus?  Another Answer.

I killed Jesus.  And, you killed Jesus.  Since the day that Adam ate the forbidden fruit in the Garden, everyone who has ever lived, or ever will live, killed Jesus. It is our sin that demands atonement, and only Jesus could make the payment for our sins. It was your sins, it was my sins, it was everyone’s sins, that cried out “crucify Him.”  And according to the will of His Father, Jesus offered Himself, a willing sacrifice, to pay for our sins and to satisfy a just and righteous God.

Isa 53:6  All we like sheep have gone astray; We have turned, every one, to his own way; And the LORD has laid on Him the iniquity of us all.

Rembrandt Got it Right! 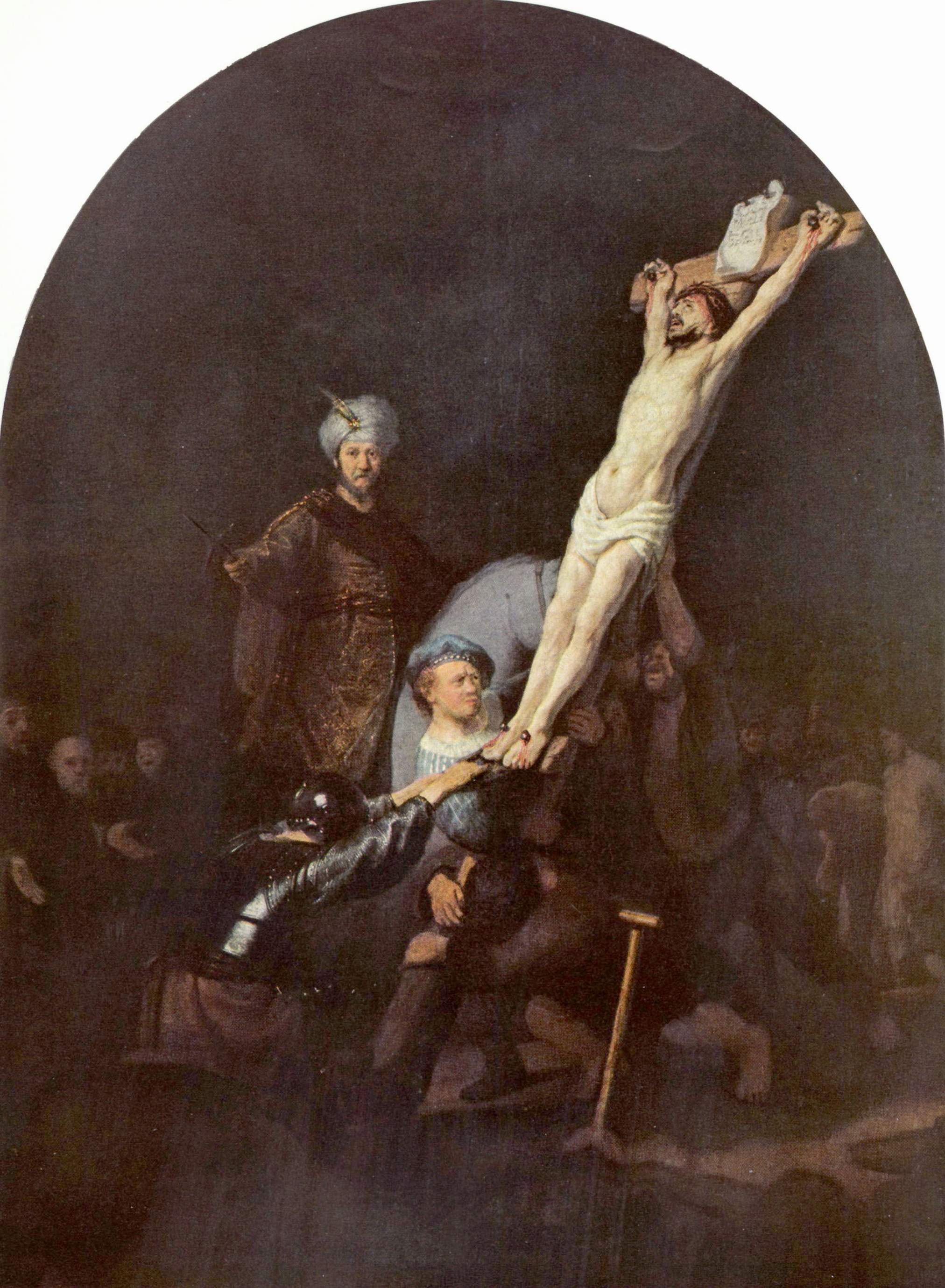 Rembrandt’s famous painting, Raising of the Cross, clearly portrays an understanding of the personal responsibility each one of us must accept and confess.

Rembrandt masterpiece depicts Christ having been nailed to the cross and being lifted up.  Noteworthy in this painting is that Rembrandt inserted himself—an indication that he understood who was responsible for the death of the Son of Man.

For those of us who understand our sin and have come to the foot of the cross in repentance, faith, and trust, Jesus’ blood has washed us clean. Adam’s sin brought our condemnation, but Christ blood paid our ransom and cleansed us and His righteousness gives us eternal life.

As you look at this painting, imagine yourself standing there at the foot of the cross.  Join Rembrandt and “see” your sin that was laid upon God’s Suffering Servant.  “See” your Saviour who offered Himself as a sacrifice for your sins.  “See” Him lifted up to die, so you can live.  And remember that He did this willingly for you.  In His life, death, and resurrection, Jesus conquered death and opened the way to Heaven and eternal life in Him.

The Final Answer to “Who Killed Jesus?”

While it was our sin that put Jesus on the cross, and it was our sin for which He died to make atonement, what is the real answer to “Who killed Jesus?”  No one.  Jesus was not killed.  By His own will, in God’s perfect time, Jesus gave up His life unto death.

John 19:30  So when Jesus had received the sour wine, He said, “It is finished!” And bowing His head, He gave up His spirit.

Hallelujah what a Saviour!

Not only at Easter, but all year through, commit to remembering every day…

Jesus Christ, who is the faithful witness, and the first begotten of the dead, and the prince of the kings of the earth. Unto him that loved us, and washed us from our sins in his own blood, And hath made us kings and priests unto God and his Father; to him be glory and dominion forever and ever. Amen. (Revelation 1:5-6)