The Last Supper was NOT a Passover Seder? 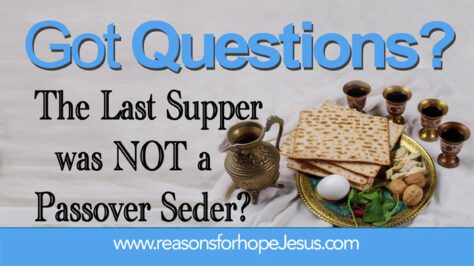 Excerpted from Room with a View of Eternity ~The Last Will and Testament of the Lord Jesus Christ, by Shari Abbott and Alex McFarland

When Jesus said, “With desire I have desired to eat this passover with you before I suffer” (Luke 22:15), He was making reference to the evening meal on the Day of Preparation (Nisan 14) being a passover meal. He was not referring to the actual Feast of the Passover (Nisan 15), or to the Passover lamb, which had not yet been sacrificed.

We know this from John’s Gospel:

John 13:1 Now before the Feast of the Passover [the Feast would be at least 24 hours later on Nisan 15], when Je- sus knew that his hour was come that he should depart out of this world unto the Father [His departure would be during the daylight hours of the Day of Preparation, Nisan 14], having loved his own which were in the world, he loved them unto the end.

John 13:2a And supper being ended [this supper was simply a meal during Passover that He shared with His disciples]…

A Misconception About the Meal

According to jewishvirtuallibrary.com, the Seder meal is to take place on “the first night of Passover (the first two nights outside of Israel).” Jews around the world “are commanded to have a special family meal filled with ritual to remind [them] of the significance of the holiday.”

The celebration of the Seder was first prescribed in the Haggadah. “Haggadah” means “telling,” however, it should be understood that the Haggadah is not the telling of the words of the Lord. It is the telling of Jewish traditions.

The Seder meal is a Jewish tradition and, although it remembers God’s deliverance of the nation of Israel from Egyptian bondage, the rituals performed are not found in God’s instructions for the remembrance of the Passover.  Leviticus 23 clearly states God’s directives regarding how His people were to commemorate the first Passover, and how they were to celebrate the Feast of Unleavened Bread as a memorial of His delivering them out of bondage.

We should not confuse Jesus’ Last Supper with a Jewish Seder. Nor should we confuse it with the Feast of Unleavened Bread. The supper Jesus shared with His disciples was a fellowship meal on the Preparation day of Passover, therefore, the Bible refers to it as a Passover meal (Luke 22:15). This would be similar to having a Christmas party on any day in December other than Christmas day.

You can purchase the book, Room with a View of Eternity ~The Last Will and Testament of the Lord Jesus Christ,  at the Reasons for Hope* Jesus store

Furthermore, dating the origins of the Passover Seder is difficult. Were the rituals of the seder celebrated in 30 AD  when Jesus was crucified?

The Haggadah, the Jewish prayer book used for the Passover celebration, was first produced in codex form around 1000 AD, so we don’t know when some of the traditions began to be practiced.  What is known is that the Passover Seder is celebrated on Nisan 15, the day of the Feast of Unleavened Bread, not on Nisan 14, the Day of Preparation– the day when Jesus ate His last supper with His disciples.

1 Cor 11:23-26  . . . the Lord Jesus on the same night in which He was betrayed took bread; and when He had given thanks, He broke it and said, “Take, eat; this is My body which is broken for you; do this in remembrance of Me.”  In the same manner He also took the cup after supper, saying, “This cup is the new covenant in My blood. This do, as often as you drink it, in remembrance of Me.” For as often as you eat this bread and drink this cup, you proclaim the Lord’s death till He comes.

***Lent: 40 Titles for 40 Days (Download NOW: 40 Titles for Lenten Devotions)
What is Lent? Should I Give Up Something? (Article and Video)
This Time Called Lent (Video)
Prepare for Lent (Video)
Lent Reflections (Video)
END_OF_DOCUMENT_TOKEN_TO_BE_REPLACED (Article)
END_OF_DOCUMENT_TOKEN_TO_BE_REPLACED (Reflect and Prepare short video)
Have You Sat At The Master’s Table? (John 13-17)