Why Do We Call It Good Friday? 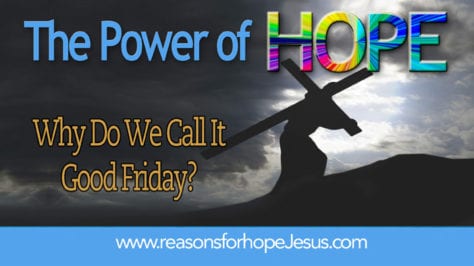 We read the accounts of the crucifixion in the Bible and we often see it portrayed in movies and videos. The day in which Jesus was crucified was a day of darkness and death— and it seems to be anything but “good.”

The scourging upon the body of Jesus is horrifying and the excruciating pain inflicted while He hung on the cross is disturbing to read about or to watch depicted.  However, it’s important that we do read the biblical accounts and that we do watch depictions of what happened on that day.  It’s important that we remember what our Lord endured and why He endured it.  It moves us to a deeper level of gratitude and our hearts are filled again with thanks for His sacrifice that bought our salvation.  The gift of our salvation cost God so much and He has so graciously given it to us.

Wow, that doesn’t sound very good.  In fact, it sounds horrendous and we cry at the thought of what Jesus endured.  So why do we call it good?  Jesus asked a similar question when a man came to Him and asked, “…Good Master, what good thing shall I do, that I may have eternal life?” (Matthew 19:16)  Jesus responded by asking, “why do you call Me good?”  And then Jesus reminded the man, “there is none good but One, that is God.”  In doing so, Jesus was telling the man that He is God!

So why do we call it Good Friday?

Just as Jesus declared Himself to be God (who alone is good), the early church declared the day in which Jesus was crucified to be good. It was the day in which our Lord and Saviour endured the excruciating pain and suffering of the cross.  And yet, even as Jesus hung on the cross, He continued His work as the Suffering Servant who came to serve (Mark 10:45).  Until Jesus’ last breath He served as the One who was sent by our good God to rescue man from bondage to sin and the curse of death. With His last words,  Jesus continued to minister to the people in His presence:

There were many afflictions Jesus endured that day.  And there were seven, short statements that Jesus spoke as He hung on the cross.   Jesus declared His atoning work with one Greek word, as He cried out, “Tetelestai.”  It was not a cry of defeat.  It was not a cry of agony or suffering.  It was a cry of completion!  The cross was not a tragedy.  It was a victory!  Jesus had paid the penalty for sin and when He cried out, tetelestai, He loudly proclaimed, “IT IS FINISHED.”

What’s so good about Good Friday?  Jesus died for us.  This was the amazing grace, and the perfect fulfillment, of His Father’s plan of redemption.  His blood paid the penalty price for our sin.  His blood can wash us clean from the stain of sin.  And another thing that’s good about Good Friday?  Sunday is coming.  Resurrection is on the horizon.  And because He died and rose from the dead, we are raised from the dead to the newness of life in Him.

And that’s why we call it GOOD Friday!

I have finished the work which You have given Me to do. (John 17:4)

In my place condemned He stood;

Sealed my pardon with His blood.

Hallelujah! What a Savior!

***Lent: 40 Titles for 40 Days (Download NOW: 40 Titles for Lenten Devotions)
What is Lent? Should I Give Up Something? (Article and Video)
This Time Called Lent (Video)
Prepare for Lent (Video)
Lent Reflections (Video)
END_OF_DOCUMENT_TOKEN_TO_BE_REPLACED (Article)
END_OF_DOCUMENT_TOKEN_TO_BE_REPLACED (Reflect and Prepare short video)
Have You Sat At The Master’s Table? (John 13-17)