Sadness and Despair: The Darkest Days of All Time

We ask that you pause and reflect on what happened so many years ago.

Take a minute now to remember the prophecy that foretold of the crucifixion of Jesus and the Scripture that proclaimed it’s fulfillment.

from the time of Jesus’ death until
He appeared to those who loved Him.

At the moment of His death, Jesus’ soul went into the heart of the earth for three days and three nights.

A few hours after His death, and before nightfall, Jesus’ body was laid in a tomb

Matthew 27:57 -60 Now when evening had come, there came a rich man from Arimathea, named Joseph, who himself had also become a disciple of Jesus. This man went to Pilate and asked for the body of Jesus. Then Pilate commanded the body to be given to him.  When Joseph had taken the body, he wrapped it in a clean linen cloth, and laid it in his new tomb which he had hewn out of the rock; and he rolled a large stone against the door of the tomb, and departed.

Take time to consider how Jesus’ disciples felt. Jesus had been crucified. He died on a Roman cross.  Some of the disciples had witnessed it.  Others had only heard what had taken place.  But they all knew it was true.  Jesus died and his body had been laid in a tomb.

Jesus had commissioned His disciples to preach and to heal (Matthew 10), but they must have wondered if they carry on without His presence.  The questions clouded their thinking and increased their sorrow.  Without Jesus’ words of comfort, their grief intensified and they experienced the darkest of all their days and wondered how they would face the future.

But everything was about to change.  Just as Jesus had told them that He would be “three days and three nights in the heart of the earth,” He also said that on the third day he would rise from death:

Matthew 16:21  From that time Jesus began to show to His disciples that He must go to Jerusalem, and suffer many things from the elders and chief priests and scribes, and be killed, and be raised the third day.

On Sunday morning, the darkness gave way to light and the dawning of a new day brought a new hope.  Jesus had risen from death.  His tomb was empty.  Little did they know what the empty tomb meant….but they were about to find out.

May the day before Easter Sunday be a day of somber reflection — a day to remember what it cost God to redeem you from your sins.  It cost God His Son.

When God created the world, He spoke it into existence.  But, when He redeemed the world, it was with the shedding of blood– the precious blood of Jesus — poured out for all.

The whole of the Bible is about Jesus.  From “in the beginning” to “I make all things new,”   Jesus is there (read: Jesus on Every Page).  Jesus is the only One who can redeem man from his sins and restore man to a right relationship with God.

Roman 10:9-10  …if thou shalt confess with thy mouth the Lord Jesus, and shalt believe in thine heart that God hath raised him from the dead, thou shalt be saved.  For with the heart man believeth unto righteousness; and with the mouth confession is made unto salvation.

Rejoice and Give Thanks

The disciples experienced three days of disheartening darkness and utter despair that we will never experience.  Reflect on those days with the remembrance that it was all according to God’s purpose and plan.  See the days of darkness through the light of Jesus.  Then rejoice and. . .

Let Easter Sunday be a day of jubilant celebration –because He lives,  For in him we live, and move, and have our being… (Acts 17:28) 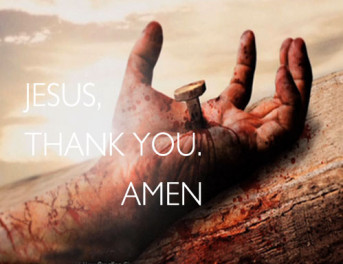 Because He Lives, I Can Face Tomorrow

***Lent: 40 Titles for 40 Days (Download NOW: 40 Titles for Lenten Devotions)
What is Lent? Should I Give Up Something? (Article and Video)
This Time Called Lent (Video)
Prepare for Lent (Video)
Lent Reflections (Video)
END_OF_DOCUMENT_TOKEN_TO_BE_REPLACED (Article)
END_OF_DOCUMENT_TOKEN_TO_BE_REPLACED (Reflect and Prepare short video)
Have You Sat At The Master’s Table? (John 13-17)