Walking with Jesus – Tested by the Chief Priests and Elders 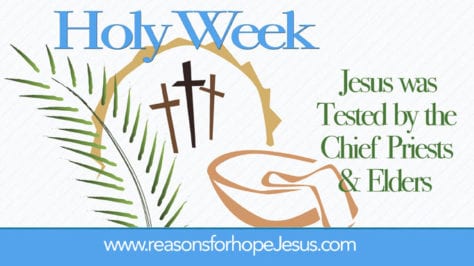 During the days from the time Jesus presented Himself on Palm Sunday until His crucifixion, Jesus was tested by the chief priests and elders, the disciples of the Pharisees, the Herodians, Sadducees and the Pharisees themselves.

Tested by the chief priests and elders.

Mat 21:23-27 Now when He came into the temple, the chief priests and the elders of the people confronted Him as He was teaching, and said, “By what authority are You doing these things? And who gave You this authority?” But Jesus answered and said to them, “I also will ask you one thing, which if you tell Me, I likewise will tell you by what authority I do these things: “The baptism of John; where was it from? From heaven or from men?” And they reasoned among themselves, saying, “If we say, ‘From heaven,’ He will say to us, ‘Why then did you not believe him?’ But if we say, ‘From men,’ we fear the multitude, for all count John as a prophet.”

So they answered Jesus and said, “We do not know.” And He said to them, “Neither will I tell you by what authority I do these things.

Jesus then told them a parable about a man, a vineyard, and the man’s two sons…

They said to Him, “The first.”

“Hear another parable: There was a certain landowner who planted a vineyard and set a hedge around it, dug a winepress in it and built a tower. And he leased it to vinedressers and went into a far country.  Now when vintage-time drew near, he sent his servants to the vinedressers, that they might receive its fruit.  And the vinedressers took his servants, beat one, killed one, and stoned another.  Again he sent other servants, more than the first, and they did likewise to them.  Then last of all he sent his son to them, saying, ‘They will respect my son.’ But when the vinedressers saw the son, they said among themselves, ‘This is the heir. Come, let us kill him and seize his inheritance.’  So they took him and cast him out of the vineyard and killed him.  Therefore, when the owner of the vineyard comes, what will he do to those vinedressers?”

They said to Him, “He will destroy those wicked men miserably, and lease his vineyard to other vinedressers who will render to him the fruits in their seasons.”

Jesus said to them, “Have you never read in the Scriptures: ‘The stone which the builders rejected Has become the chief cornerstone. This was the Lord’s doing, And it is marvelous in our eyes’?  Therefore I say to you, the kingdom of God will be taken from you and given to a nation bearing the fruits of it.  And whoever falls on this stone will be broken; but on whomever it falls, it will grind him to powder.”

Now when the chief priests and Pharisees heard His parables, they perceived that He was speaking of them. But when they sought to lay hands on Him, they feared the multitudes, because they took Him for a prophet.

***Lent: 40 Titles for 40 Days (Download NOW: 40 Titles for Lenten Devotions)
What is Lent? Should I Give Up Something? (Article and Video)
This Time Called Lent (Video)
Prepare for Lent (Video)
Lent Reflections (Video)
END_OF_DOCUMENT_TOKEN_TO_BE_REPLACED (Article)
END_OF_DOCUMENT_TOKEN_TO_BE_REPLACED (Reflect and Prepare short video)
Have You Sat At The Master’s Table? (John 13-17)