Tested by the Pharisees’ Disciples, the Herodians, and the Sadducees 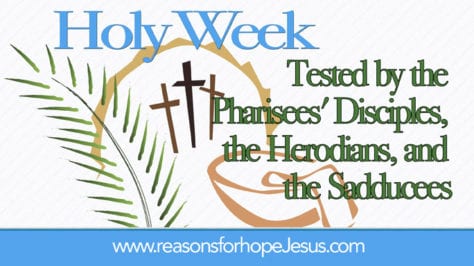 During the days from the time Jesus presented Himself on Palm Sunday until His crucifixion, Jesus was tested by the chief priests and elders, the disciples of the Pharisees, the Herodians, Sadducees, and the Pharisees themselves.

Tested by the Disciples of the Pharisees and the Herodians

Mat 22:15-22  Then the Pharisees went and plotted how they might entangle Him in His talk.  And they sent to Him their disciples with the Herodians, saying, “Teacher, we know that You are true, and teach the way of God in truth; nor do You care about anyone, for You do not regard the person of men.  “Tell us, therefore, what do You think? Is it lawful to pay taxes to Caesar, or not?”

But Jesus perceived their wickedness, and said, “Why do you test Me, you hypocrites?  “Show Me the tax money.” So they brought Him a denarius.

And He said to them, “Whose image and inscription is this?”

When they had heard these words, they marveled, and left Him and went their way.

Tested by the Sadducees

Mat 22:23-33  The same day the Sadducees, who say there is no resurrection, came to Him and asked Him, saying: “Teacher, Moses said that if a man dies, having no children, his brother shall marry his wife and raise up offspring for his brother. Now there were with us seven brothers. The first died after he had married, and having no offspring, left his wife to his brother.  Likewise the second also, and the third, even to the seventh.  Last of all the woman died also.  Therefore, in the resurrection, whose wife of the seven will she be? For they all had her.”

Jesus answered and said to them, “You are mistaken, not knowing the Scriptures nor the power of God.  For in the resurrection they neither marry nor are given in marriage, but are like angels of God in heaven.  But concerning the resurrection of the dead, have you not read what was spoken to you by God, saying, ‘I am the God of Abraham, the God of Isaac, and the God of Jacob’? God is not the God of the dead, but of the living.”

And when the multitudes heard this, they were astonished at His teaching.

***Lent: 40 Titles for 40 Days (Download NOW: 40 Titles for Lenten Devotions)
What is Lent? Should I Give Up Something? (Article and Video)
This Time Called Lent (Video)
Prepare for Lent (Video)
Lent Reflections (Video)
END_OF_DOCUMENT_TOKEN_TO_BE_REPLACED (Article)
END_OF_DOCUMENT_TOKEN_TO_BE_REPLACED (Reflect and Prepare short video)
Have You Sat At The Master’s Table? (John 13-17)