“You will hear of wars and rumors of wars.” — A Memorial Day Remembrance 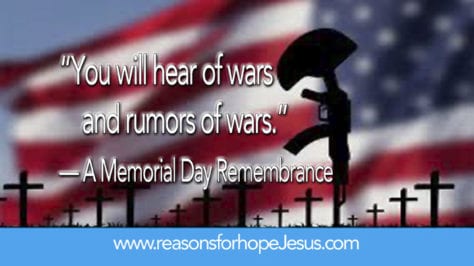 War is an event that is all too well-known to our nation and to the world. As we approach another observance of Memorial Day the matter of war is again brought to the forefront of our thinking..

War in the Bible

The Word of God has much to say about war, detailing in the Old Testament battle after battle and the tremendous loss of lives. That history, and what has taken place since, should give us great pause if we would allow this Memorial Day to serve its purpose as a time to consider the loss, the terrible horrors of war, and to remember those who served.

Deuteronomy 20 is a chapter that could be titled, The Law of Warfare” . . .

This is a most sobering declaration. It does not say, “if you go out to battle” but rather, “when you go . . .”  War is inevitable. God so warned and instructed Israel about war; and Jesus put His divine witness to its inevitability when He said,

And such the biblical reminder that wars will continue, at least, until Jesus returns and sets in motion the dawning of His reign and the end of the world system as we know it — a world without wars, and without sin.

Until that day, and as long as God allows America to be, Memorial Days will be observed. There will be a time set apart in which we fulfill the intent of this special day — to honor the men and women who died while serving in the U. S. Military during times of  war.

What especially motivates me to address this matter of Memorial Day is the remembrance of the valient men who I knew — men who served in the most difficult of times and in the most difficult of situations. These men were not of those who died in battle. They were men who served and returned from the horrors of war and, though history may now have forgotten them, they were valiant men.

The definition of the word “valiant,” as an adjective, is, “to be boldly courageous, brave, stout-hearted.” Keep that in mind as you and I hopefully take time to remember those have served our country in times of war.

Memorial Day is a very special Day to me, for I am brought to remembrance that I come from a long line of valiant, courageous, and brave men. I believe the Lord desires that I keep them in my thoughts on Memorial Day and remember their service.

I hold in my hands a medal that belonged  to my grandfather  It “speaks” of his service in the U. S. Army during World War I. It has attached to it bars that indicate the specific engagements in the battlefields of Europe — “the Meuse – Argonne, the Marne” and more. My grandfather would sit across from me at the dining room table and tell \of the horrors of what he experienced in The Great War. My eyes surely widened as he related to me the heroics of men, who fought alongside him, and many who gave their life in what was called, The War to End all Wars. My grandfather served and he lived to tell about it. And I remember.

As I look through an old box of many medals, my father comes to mind because many of the medals are his. My father came from a rather poor family, three boys and two girls, and a father (my grandfather) who had served his country in perilous times. When war broke out in Japan and Europe, my father and his brother (the younger of the three boys) enlisted in the U. S. Navy and went to war.  My father’s oldest brother was already in the Army. He served under General George S. Patton in Europe, where he was wounded in action. My father and his younger brother both served together on a U. S. destroyer in the Pacific during WWII and my father served again in the Korean War (here are medals in the box from that war too).

Though my father and his brother spoke very little about the war, I remember my mom saying, “Your father was never the same person after he came back from the war.” Both of them returned from the battles forever marked inwardly by what many of us will never understand. They had spent years fighting against an enemy who sought to destroy them.  And, in turn, they sought to destroy that enemy and win the battle. Such is war, so easily defined but the most difficutl of times.

When Jesus spoke of the inevitability of wars,  saying, “You shall hear of wars and rumors of wars….” (Matt 24:6, Mark 13:7, Luke 21:9), we often don’t realize what a sobering statement He gave.  It is unsettling when one stops to think on it, especially if one has been there.

The Legacy of War

The legacy of my family’s service during wartime caused me to follow in their footsteps.  In December of 1964, I joined the U. S. Navy at 17. As I now experience the long life that my God has graciously given me on this earth, I become even more emotionally attached to Memorial Day and to what it is really all about.

I just finished reading a book titled, On Desperate Ground, written by Hampton Sides. The book records the actions of U. S. Marines in Korea, at the Chosin Reservoir. The book is filled with the names of men who did remarkable feats in the midst of circumstances that readers of our day find almost unbelievable. What struck me were the names of these heroic figures.— the names of real men who are remembered by very few people. The author has made an important contribution to American history by recording their names and telling a new generation of their heroic wartime service for their country.