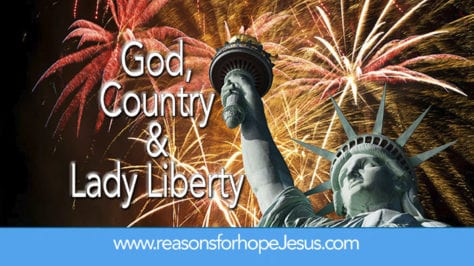 What can we learn from Lady Liberty?

Lady Liberty stands tall on Liberty Island in the middle of New York Harbor.  She holds her beacon of light high above her head, and is attired in a flowing robe.  She is “crowned” with a seven point headpiece.

This beautiful statue is not to be considered a Christian symbol. It was never intended to honor Almighty God. But Lady Liberty does stand as an emblem of freedom.

Lady Liberty represents freedom from persecution in government, freedom from social and economic oppression, and even freedom of religious beliefs and practices.  This statuesque “lady” is an emblem of the personal liberty upon which our country was built. Yet, when we consider those liberties in our world today, even though they are constitutionalized to be upheld, they are being eroded in ways that we have never seen before.  Everyone agrees that there are huge problems in our country, and things need to change.  The  question we should be asking is, what can Christians do about it?

As Christians, our beacon of light is much different than Lady Liberty’s torch.  It is not a torch that we hold high, but rather it’s the light of a Person, and His light emanates from our being.  Our flowing robe is not seen by others, but it is something that “clothes” us.  Our robe is a robe of righteousness, gifted to us by the One who is righteous.  Someday we will stand before God, being worthy to enter His kingdom because we are clothed in this “robe,” which is the righteousness of Christ (Read: What are the Doctrines of Imputed, Infused, and Imparted Righteousness?)

Lady Liberty’s seven pointed headpiece adorns her head, and one day we will receive our crowns.  Our crown will reflect His radiance and the good works that He has worked through us. (Read: What is the Judgement Seat of Christ?   What Crowns will Believers Receive?   What is the Crown of Righteousness?)

There may be some who see Lady Liberty as a pagan symbol of worldly power.  They see her as representing governmental influence and personal strength and glory, so it is not my intent to compare, but rather to contrast, the liberty this “lady” represents and the liberty our Lord gives.

Unlike those who depend on earthly kingdoms, our allegiance is to the Kingdom of God.  The Kingdom of God reigns on this earth in the hearts of all who belong to the King.  Our power and our strength comes from the Holy Spirit who indwells us, and our lives are to be lived for the glory of the Lord.

So how does this relate to God and country?

Since America became a nation in 1776, we have been exhorted to pray for God and country.  This same exhortation came up in a conference call recently with a ministry friend who is very committed to effecting a change in the direction of our nation.  His passion is to turn the hearts of Christians to God and to encourage Christians to actively live what they believe and to vote according to God’s will and ways revealed in His Word.

When I heard this exhortation that we need to encourage Christians everywhere to pray for God and country, it caused me to think, “what is country?”  A country does not have a soul, nor does it have a mind, or a vote.

We often talk about the pulse of the nation, or the heart of America, and yet all of these are human attributes– none of which a country has.  “So, what is a country?” I thought again.  Then it came to me.  A country only exists because of a unified people. A country is my neighbors….on a grand scale.  We would all agree that a country is the people, but it’s only when we start thinking of people as our neighbors that we begin to desire the unity upon which the United States was founded.

Founded On and Guided by Law

As I pondered further about God and country, also God and neighbor, I thought about how Lady Liberty holds one tablet in her hand and upon it is written law:  July IV, MDCCLXXVI — the  date, in Roman numerals, of the signing of the Declaration of Independence — that’s man’s law.

Contrast that with God’s Law.  From the decalogue written on two tablets (the Ten Commandments) to two laws Jesus gave, written on the tablets of our hearts:

Life in Christ begins by loving God first and establishing our hearts with His grace (Hebrews 13:9).  When we do that, we stand strong in our vertical relationship with Him, and then His love will flow through us in the horizontal direction to our neighbors, to our countrymen.

The United States and the United Church

John 17:11  And now I am no more in the world, but these are in the world, and I come to thee. Holy Father, keep through thine own name those whom thou hast given me, that they may be one, as we are.

John 17:21-22  That they all may be one; as thou, Father, art in me, and I in thee, that they also may be one in us: that the world may believe that thou hast sent me.  And the glory which thou gavest me I have given them; that they may be one, even as we are one:

Jesus said that our unity will reveal Him to the world:  “…that the world may believe that thou has sent me…” (John 17:21).  We are to be His ambassadors to reveal Him and to represent His ways.

By sharing the gospel with our neighbors, and by uniting as the body of Christ and thinking and voting biblically, we can bring about change in our country.  When the hearts of Americans turn to the Lord, the people of our country will be changed because they will be directed by the Lord’s will and His ways.

This fourth of July, consider what your contribution can be to making a change in this great United States of America.  Read the Bible and pray so the light of Christ will shine through you.

Just as Lady Liberty represents the freedom of our country, we are to stand tall representing the freedom we have in Christ.  We are to let His light shine through us to our neighbors, and we are to proclaim His law, the Royal Law of love (James 2:8).

Stand fast therefore in the liberty wherewith Christ hath made us free, and be not entangled again with the yoke of bondage. Galatians 5:1

Happy 4th of July from Reasons for Hope* Jesus

Take all that you can of this book upon reason, and the balance on faith, and you will live and die a happier man. — Abraham Lincoln, 16th President of the United States [Response when a skeptic expressed surprise seeing Lincoln reading a Bible]

A thorough knowledge of the Bible is worth more than a college education.  — Theodore Roosevelt, 26th President of the United States

As Commander-in-Chief I take pleasure in commending the read- ing of the Bible to all who serve in the armed forces of the United States. Throughout the centuries men of many faiths and diverse origins have found in the Sacred Book words of wisdom, counsel and inspiration. It is a fountain of strength and now, as always, an aid in attaining the highest aspirations of the human soul.  — Franklin D. Roosevelt, 32nd President of the United States,  January 25, 1941  [Letter from the White House to the Armed Forces on the first page of my father’s military-issued New Testament and Psalms pocket Bible.]

Within the covers of the Bible are the answers for all the problems men face.  — Ronald Reagan, 40th President of the United States