Can You Pray St Patrick’s Prayer? 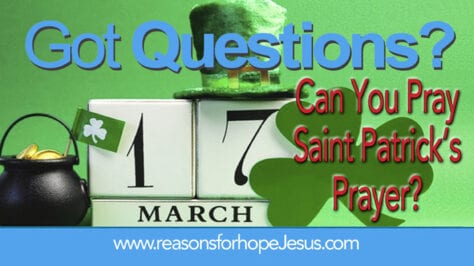 Saint Patrick’s Day has become a BIG party day—a day for parades and celebrations. It’s a day of eating Irish food and drinking green beer and Irish Whisky.  It’s a day of wearing green. . . and pinching those who don’t.  And, it’s a day of being Irish. . . even if you aren’t.

But this is not what the patron saint of Ireland would have expected.  Nor is it what he would have wanted (Read What Would St. Patrick Think About His Day?). Saint Patrick (385-461) was more about surviving than he was about celebrating. He was more about comforting the soul than pleasing the flesh. His life is an example of Christ’s provision of hope and strength in surviving persecution and oppression.

Before He Was “Saint Patrick”

Little is known about Saint Patrick before the time of his preaching in Ireland.  We know he was a British native and was about 16 years old when he was captured by pirates in the late 4th century and was enslaved for six years in Ireland.  During his enslavement, he came to Christ and committed himself to serve Him.  After escaping from his captors, he returned to Britain.  A few years later, he had a vision in which he felt called to return to Ireland and preach the gospel.  The rest is history (Read more about the man, Saint Patrick, here: Happy Saint Patrick’s Day)

The Valley of Christian Growth

Freed from six years of enslavement and persecution, a deep and dark valley of suffering, Saint Patrick did not allow his experience to define him as a bitter man. Instead, we can determine from his writings, that his love for Jesus and the peace he found in the Lord’s presence, formed a theology of hope — a theology that prepared him for his life’s mission of sharing the saving grace of Jesus.

Had Saint Patrick not experienced those six years in a valley of suffering, would his testimony have been so powerful and as fruitful?

No one can answer that question.  But we do know that even before Saint Patrick’s freedom from slavery, he was freed from the bondage of sin and saved by Jesus.  He experienced a rebirth that made him a new man and compelled him to serve the Lord and one day evangelize the country in which he had been enslaved.

Saint Patrick would not want his legacy to simply be a celebration of Irish heritage and culture. Nor would he want it to be a riotous party of consumption of food and alcohol.

Saint Patrick would want his day to be a time of commemoration — a time of quiet repose to reflect upon the great mercy and grace of God. A time to remember God’s goodness, His kindness, and His faithfulness, not only in saving us but also in comforting us in any valley of suffering and strengthing us in any trial or tribulation.

Finally, the message of Saint Patrick is a reminder that we are able to commune with our Creator.

A poem, or prayer, by St. Patrick has survived the test of time and remains popular in our day. Read the entire poem, known as “St. Patrick’s Breastplate,”  here). In the closing stanzas, St. Patrick beautifully articulated the all-encompassing presence of Jesus, our communion with Him, and what our commitment and response to Him should be.

The Bible says that Jesus is with us always, by the power of His Holy Spirit (Col 1:27).  And Jesus promised that He will never leave or forsake us (Heb 13:5b).  Do you remember those things every day?  Pray the words of St. Patrick and press these words upon your heart.

I bind unto myself the Name, The strong Name of the Trinity, By invocation of the same, The Three in One and One in Three. By Whom all nature hath creation, Eternal Father, Spirit, Word: Praise to the Lord of my salvation, Salvation is of Christ the Lord.

Let Saint Patrick’s Day be a day of communion with Christ. He is with us always.

Are you always “with” Him?  Find your rest in His presence and rejoice in your salvation.

Take one minute to refocus and know that the Lord is with you always (Mat 28:20b)

Take a lesson from this saint of old.  Share the saving grace of Jesus with others.