Is there an error in Genesis 2:17 because Adam & Eve did not physically die? 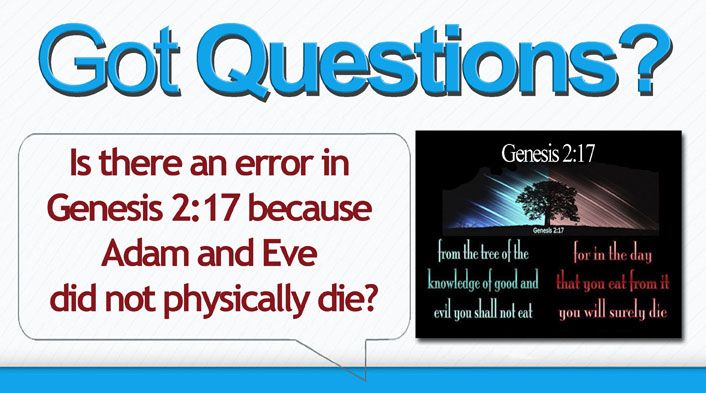 Gen 2:17  “But of the tree of the knowledge of good and evil you shall not eat, for in the day that you eat of it you shall surely die.”

Atheists claim this is an error in the Bible because Adam and Eve didn’t physically die when they ate the forbidden fruit.  However, because we know that there are no errors in God’s Word, there must be an explanation.

Some will claim that God only meant they would die spiritually, and it’s true Adam and Eve did die spiritually when their sin separated them from God.  But that is not a correct interpretation, because the Hebrew word for “die” indicates a physical death. Strong’s Dictionary defines “die”  in the Hebrew as:

The Hebrew word “muwth” is used 790 times in the Bible and is translated in the following ways:

It’s clear from the definition of the word, and the use of the word muwth, that Genesis 2:17 means total death. That includes both a spiritual and physical death.  We certainly understand that Adam and Eve died a spiritual death when they sinned, but we also know that they did not die physically at that time.  In fact, Seth was born when Adam was 130 years old and Adam lived a total of 930 years (Genesis 5:3-5).

The explanation for what might seem to be a contradiction in Genesis 2:17 is found in the original language words. In the Hebrew manuscripts the word “muwth” (translated “die”) is used twice.  Repetition is a common Hebraic literary device used to add emphasis.  If both Hebrew words were translated the verse would read:

In English we use adjectives for emphasis, so our English Bibles translate “muwth muwth” as “surely die” (or “certainly die”) to provide emphasis on the word die.

The Geneva and Young’s Literal Translation more clearly communicate what this verse means by repeating a variation in the translation of the word “die.”

“Shalt die the death” (Geneva) puts emphasis on the death being future, not immediate. The Young’s Literal Translation most clearly indicates the process of dying with the words, “dying thou dost die.”  Translations using “surely” or “certainly” for emphasis should not be interpreted to mean immediate death. Reading Genesis 2:17 without those adjectives indicates a future tense:  “thereof thou shalt… die.”

The Mercy and Grace of God

When Adam and Eve ate from the tree of the knowledge of good and evil, they sinned and died a spiritual death. They also experienced the beginning of the physical dying process of their bodies. In the dying process, genetic mutations  began to occur and with each passing generation those mutations increased. While the death of the body was an irrevocable penalty for man’s sin, God, in His mercy, gave a command that would slow the increase of genetic mutations. Recorded in Leviticus 18 is God’s prohibition of sexual relations (marriage) between close relatives:

Leviticus 18:6  None of you shall approach to any that is near of kin to him, to uncover their nakedness: I am the LORD.

God gave this prohibition to protect His people.  From that time to the time in which we live, there are laws that prohibit intermarriage between close relatives.

God is good and He is gracious! God could have killed Adam and Eve when they sinned, but instead in His mercy He gave them grace and promised a coming Rescuer (Genesis 3:15).  And throughout the ages, God has been protecting His people in more ways than we know.