Does the resurrection of Lazarus contradict Hebrews 9:27? 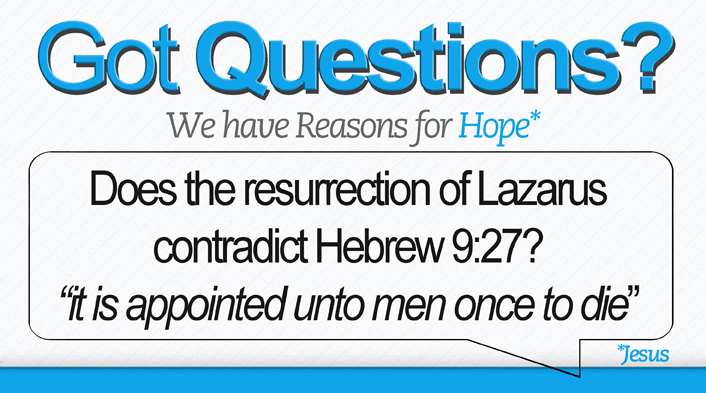 When Adam sinned in the Garden, God imposed death as the consequence of his sin. The book of Romans confirms that the “wages of sin is death” (Romans 6:23).  Therefore, Adam, and everyone born since Adam, has death as the penalty of sin imposed upon them.

If that is the case, how could Lazarus (and others) be raised from the dead, live again, and die a second physical death?  The simple answer is that those who were resurrected and brought back to life were resurrected by a miracle of God. In doing this, God set aside the natural order of what physical life has been since the fall of man.  Resurrection is something only God can do, as the Giver of Life and the Almighty and All Powerful Creator.

We know there were other times in which God set aside the natural order with a miracle of His doing.  There was the long day of Joshua, in which the sun “stood still” (Josh 10:13).  There was also the star that led the wise men to Jesus following His birth (Matthew 2:7-10).  We know our God is omnipotent and can do whatever He wills.  Just as God can re-birth a spiritually dead soul, He can also physically re-birth a dead body.  Because only God can set aside the natural order of that which He has created or ordained, the resurrection of Lazarus does not deny what is said in Hebrews 9:27.  It was a miracle that supersedes that which is common to man (death).

We should also note that the verse in question, “it is appointed for men to die once, but after this the judgment” (Heb 9:27), is a doctrinal truth from the Apostle Paul…AFTER the cross.  This really shouldn’t be applied to the resurrections of those before Jesus’ first coming.  It is a doctrinal truth for the time in which we live, the church age, the age of the indwelling of the Holy Spirit under the New Covenant.  All who lived (and died) prior to Jesus’ death were under the Old Covenant and nothing in God’s teaching under the Old Covenant denies the possibility of resurrections of humans who would die again.

This question raises another question, why did God do this miracle?

Reasoning from the Bible suggests it was meant to be a sign for those who witnessed it (under the Old Covenant).  It was to reveal Jesus as their Messiah (Anointed One) sent by God because they knew that only the power of God could raise someone from the dead.

We are told that the Jews required a sign (1 Corinthians 1:22).  And, from the beginning of Jesus’ ministry, He performed signs and wonders as a means to affirm who He is (John 4:48, John 20:30).  Peter confirmed this in his sermon on the day of Pentecost:

Acts 2:22  Ye men of Israel, hear these words; Jesus of Nazareth, a man approved of God among you by miracles and wonders and signs, which God did by him in the midst of you, as ye yourselves also know.

This should now raise the question, why doesn’t God resurrect people, to live again, during the time in which we live?  It could be a way of revealing His power and might to the lost.

Some claim that God has resurrected people back to life, but those claims cannot be fully substantiated.  We must remember that we are not referring to resuscitating a body at the time of clinical death.  Instead, we are discussing the resurrection of a body and soul from confirmed death in which the body is certifiably dead by both medical diagnosis and a conclusive passage of time.  Remember, Lazarus had already been dead and in the grave for four days.  After that amount of time decomposition had already set in… for (as is so profoundly stated in the King James Bible) “he stinketh” (John 11:39).

While we cannot speak for God and biblically answer why He does not resurrect people in our time, we can reason “why,” from what Scripture tells us.  The Hebrews 9:27 verse is clear that after death comes judgment (under the New Covenant).  For anyone who has repented and trusted in Christ’s atoning work on the cross and received Him as Lord and Saviour, this will be a wonderful judgment.  The judgment for our justification took place “at the cross,” which means it happened when we trusted in Jesus.  We received God’s forgiveness of our sins because Jesus paid the penalty for them and washed us “from our sins by His own blood” (Revelation 1:5).  When Jesus saved us He also gave us His righteousness, which made us worthy to enter into Heaven and into God’s presence immediately when we die.  So death is a blessing of our inheritance as God’s children.  Our judgment at death will proclaim us “worthy” to enter into the presence of the Lord. (2 Cor 5:8)

This makes it quite understandable why God would not resurrect a believer and restore their earthly, physical life.

It would be taking away the gain of which Paul spoke:

It would be stripping away the reward promised by Jesus:

It would be rescinding the glory that we long to obtain:

2 Thessalonians 2:14  Whereunto he called you by our gospel, to the obtaining of the glory of our Lord Jesus Christ.

2 Corinthians 5:1-2  For we know that if our earthly house of this tabernacle were dissolved, we have a building of God, a house not made with hands, eternal in the heavens.  For in this we groan, earnestly desiring to be clothed upon with our house which is from heaven.

The resurrection of Lazarus was not a contradiction of Hebrews 9:27.  It was a revelation of the power of our mighty God, given at that time as a sign for the lost sheep of the house of Israel.  In our time such signs are not needed.  Jesus has been fully revealed by His life, death, burial, and resurrection and in His Word.

The Jews required a sign, but  “we walk by faith, not by sight” (2 Corinthians 5:7)  None of us can truly imagine the glory that awaits us, but one thing is certain…once we taste of Heaven we will not desire to return to this world.

For we know that if our earthly house of this tabernacle were dissolved, we have a building of God, a house not made with hands, eternal in the heavens. (2 Corinthians 5:1)