If You Were the Only Person Alive, Would Jesus Have Died For Only You? 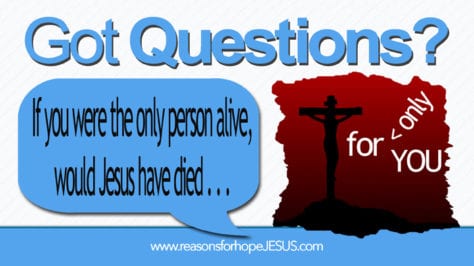 Is it true that if I were the only person alive, Jesus would have gone to the cross for only me?

This question comes from a popular quote that is often used by Christians when sharing the love of Jesus with others:

“If you were the only person on earth, Christ would have still suffered and died for you.”

It is said that these words are from St. Augustine of Hippo more than 1600 years ago.  However, it’s questionable whether he ever said these words, or wrote them. This quote is never cited from any of his works (if you do find a citation for this, please let me know).

St. Augustine is quoted as having said:

“God loves each of us as if there were only one of us.”

That’s different than the statement “If you were the only person alive…Jesus would have died for you.” It should also be noted that the words credited to St. Augustine, “God loves each of us as if there were only one of us”  are unsourced. He’s quoted as having said this, but it’s not found in his written works.

Jonathan Edwards is also quoted with a similar statement:

“If only one person in all of history got saved, the mercy of God would have been eminently demonstrated.”

While Augustine’s quote is about the great love of God, this quote focuses on the great mercy of God. Both are very different than “If you were the only person alive…Jesus would have died for you”  — a quote that magnifies the worth of the “only person.”

The Likely Source of “”If you were the only person…”

The sentiment, “If you were the only person alive…Jesus would have died for you,” can be traced to the writings of C.S. Lewis.  In his book Perelandra (1943), Lewis wrote:

When He died in the Wounded World He died not for men, but for each man. If each man had been the only man made, He would have done no less.

While this conveys the same message, remember that Lewis’ book is a fiction book.  It’s not a biblical commentary and it’s not about Jesus. Lewis’s words might have influenced the use of, “If you were the only person alive…Jesus would have died for you, ” but they do not support the saying as being true.

I would suggest that Lewis and Augustine did not intend to elevate man’s worth, but rather to magnify God’s love. Self-esteem is not a biblical virtue.  It’s quite the opposite.  Self-esteem is an inward focus.  We are to look upward, to Jesus. We are not to elevate ourselves. Rather, we are to humble ourselves, remembering the high cost of our sins, and being thankful to Jesus who humbled Himself and came to earth to live and die for a world of sinners.

I would, however, suggest that people who use this claim are doing so with the best of intentions.  The intention is to illustrate how much Jesus loves us individually.  His love is beyond our comprehension and our finite minds are not able to fully understand the immensity of His love and grace.

So is the Statement True?

Whether this quote originated with Augustine or Lewis is not important.  The fact that God does not say this, and the Bible does not support such a teaching, is important.

Now don’t hear me wrong.  It is absolutely true that God loves every one of us individually.  His love is immeasurable, unfathomable, unconditional, and perfect.  However, it cannot be said that God would have sent Jesus to die if you (or I, or anyone) had been the only person alive.

Nothing in the Bible suggests that Jesus would have died for only one person. The statement is a logical fallacy since there is a basic flaw in the premise.  The statement is hypothetical, as indicated by “if,” and the conclusion is not reasonable or possible because the hypothesis could never have happened.

Let’s remember there were millions of people alive at that time Jesus died. To suggest that it could have been possible for only one person to have been alive is not founded in reality. Additionally, Jesus was not sent to die for an individual. God sent Jesus to give His life for the “lost sheep [plural] of the house of Israel” (Mat 15:24) and for the whole world (John 3:16).

To suggest a hypothetical situation that contradicts both reality (historical facts) and God’s Word (prophecy foretold and fulfilled) creates a dangerous teaching. We cannot hypothesize on what God has said or done.

We do know what God did do when only two people were alive and they sinned.  He began revealing His plan to send a Rescuer.  That plan was “from before the foundation of the earth” (Titus 1:2) and it could not have come to pass in any way other than it did.

We can only teach as fact that which God has done and that which He has prophesied and promised to do.  This can be understood in trying to explain prophesy.  We know only that which God has revealed about future events, but until things come to pass we can never fully know. Therefore, we must refrain from presenting hypothetical conjecture as fact. Additionally, once something has come to pass, we cannot look back and hypothesize what might have been the outcome, if things had happened differently.

Hypothetical Ideas About Historical Events Is Not Biblical

The simplicity of the gospel is sufficient to proclaim God’s great love.

Understand that if the sacrifice Jesus made for all mankind (“the world”) doesn’t convict the heart of a sinner, then neither will a claim that Jesus would have died for them alone.

God did not send Jesus to die for only one person so please refrain from telling people it could have happened if they were that one person.

Instead, tell them how much God loves them. Tell them how God desires that they repent and trust in His Son, Jesus.  Tell them that Jesus is the Way, the Truth, and the Life, and tell them how they can come to the Father through Jesus. Then let the Holy Spirit do His work.  If their souls are convicted and their hearts are open, Jesus is faithful to save all who will turn to Him in faith.

John 3:16  For God so loved the world that He gave His only begotten

Son, that whoever believes in Him should not perish but have everlasting life.