Do Angels Take Us To Heaven When We Die? 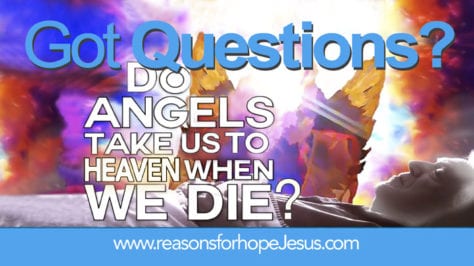 No one can answer this question with biblical proof.  However, there is biblical reasoning to support the idea that angels accompany us on our transition from this world to Heaven.  In addition, there are many accounts of people who have sat at the bedside of someone dying, and claim to have seen an angel or felt the presence of angels.  Let’s look at both biblical and experiential support on this.

During His earthly ministry, Jesus told a parable about a beggar man, named Lazarus. He died and was carried by angels to Abraham’s Bosom (The place where Old Testament believers went at death.  Read: Where did OT Saints go at death? Abraham’s Bosom? Where was that?)

Luke 16:22 And it came to pass, that the beggar died, and was carried by the angels into Abraham’s bosom: the rich man also died, and was buried.

Note: the rich man also died, but there is no mention of him being carried by angels. Why? Because his eternal destiny was not Abraham’s Bosom.  The rich man was in the place of torment, i.e. Hell (Luke 16:23). Also note, the rich man was not named.  Lazarus’s name was written in Heaven (Luke 10:20), but his was not.

Angels carried Lazarus to Abraham’s Bosom, which was also called Paradise by Jesus (Luke 23:43).  According to Scripture, it was in the “heart of the earth.” However, when Jesus ascended to Heaven 40 days after His resurrection, He took all those who were at rest in Abraham’s Bosom with Him. (Eph 4:8).  Paradise, as Jesus called it, is now in the Third Heaven, which is God’s dwelling place.  As Christians, we go there immediately at death (2 Cor 5:8).

3. The Archangel Will Accompany Jesus at the Rapture

Another support for believing angels escort the dead to Heaven is found in 1 Thessalonians 4.  At the time of the Rapture, the souls and bodies of those who are alive and belong to Jesus will be taken to Heaven. We are told that Jesus will descend and the archangel with Him (1 Thess 4:16).

The are many accounts given by people who were at the bedside of a dying person when they saw someone, or something, they perceived to be an angel. My brother experienced such.

My mother had been in a nursing home for four years, when her life on earth was coming to an end.  Her physical condition had deteriorated and her death was imminent.  My husband, daughters, and I lived ten hours away, and there was no easy air transportation to her town in the upper peninsula of Michigan.  A winter storm was predicted to be severe, and had already begun. So we waited until the next morning to leave. That proved to be good choice, since the bridge to the upper peninsula was closed before we would have reached it.

My brother sat alone with my mother during the nighttime hours and he watched as her breathing became more and more shallow.  He saw her take her last breath.  And then he saw sparkles that drifted up to the ceiling.

I believe what he saw was the angels that came to  escort her to Heaven.  Why? Because of the biblical references above, because of other accounts of the sense of the presence of angels at the death of believers, and because,  in the Bible, angels have appeared to look like stars (Rev 1:20, 12:4).

The rest of the story.

My brother is not a believer.  When I told him about the parable in Luke 16, and explained that angels carried Lazarus to his resting place, and then told him that I believe what he saw were angels, he responded, “Well, I don’t know about that. But I know what I saw.”

This was an answer to my mother’s prayers. All of her life, she prayed for my brother’s salvation. And God graciously gave him a glimpse of what could be his, if he would just believe.  My brother is not saved — yet.  But he saw what he saw, and he doesn’t deny the reality of what he saw.  He even confirmed the clarity of his mind and his vision at the time. Because he remains certain of the sparkles he saw, I hope and pray that one day his heart will be opened and he will see with his heart what he saw with his eyes — a spiritual realm of peace that God offers to him, if he will trust in Jesus.

Since angels carried Lazarus to Abraham’s Bosom, since Jesus and the archangel will escort believers to Heaven at the Rapture, and because so many people have “seen” or “experienced” angels at death, it’s biblically reasonable to conclude that when Christians die angels do escort them to Heaven.

We are told that angels are “ministering spirits, sent to serve those who will inherit salvation?” (Hebrews 1:14)  If they minister to us during our lives, it’s very reasonable to think they will minister to us at death.

Also remember that God promises to meet all our needs (Phil 4:19).  When we pass through the atmospheric heaven, and then the celestial heaven on our way to the Third Heaven, we might need the protection of angels. The celestial heaven (outer space) is reasonably thought to be the dwelling place of spiritual beings — both good and evil. So God will send His angels to escort us safely through that realm.

Bible preachers and pastors, both past and present, including Billy Graham, David Jeremiah, and many others, have believed that angels will come to carry us home.

The next time you sit at the bedside of a believer moving closer to home, look for the “sparkles” — watch for the angels.  You just might get a glimpse of unveiled glory and God’s angels sent to carry His child home.

One Last Thought: The Other Place

So if angels carry believers into their heavenly home, how are those who die in their sins taken to Hell?  The answer is: we don’t know.  And the Bible doesn’t give any clues.

But what we do know is that we don’t want anyone to go to Hell.  We want our family, friends, co-workers, neighbors, and all people, to trust in Jesus and receive His forgiveness of sins and His gift of eternal life.  Then, death will be a passage into the promised glory of Heaven…and the journey will not be alone.

Take a minute and read our salvation page, How to Be Saved and Born Again?  Be prepared to share the saving grace of the Lord Jesus Christ.