How Should We Understand the Willful Sin of Hebrews 10:26? 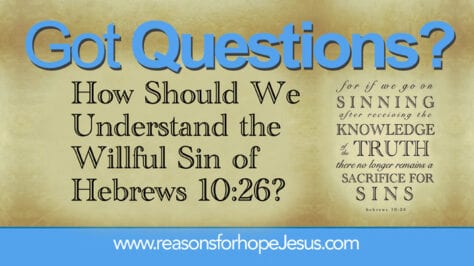 The writer of Hebrews wrote about willful sin and its consequences in this verse:  Hebrews 10:26  For if we sin willfully after that we have received the knowledge of the truth, there remains no more sacrifice for sins.

This is certainly a difficult-to-understand verse, for we know that every Christian has sinned willfully after being saved.  So what does it mean that there “remains no more sacrifice for sins?”  To understand this, let’s first read further:

Hebrews 10:27-29  But a certain fearful looking for of judgment and fiery indignation, which shall devour the adversaries.  He that despised Moses’ law died without mercy under two or three witnesses: Of how much sorer punishment, suppose you, shall he be thought worthy, who has trodden under foot the Son of God, and has counted the blood of the covenant, wherewith he was sanctified, an unholy thing, and has done despite unto the Spirit of grace?

It must first be understood to whom the book of Hebrews was written. It was written to people of Hebrew descent, who had been of the Jewish faith and religious practices but now belonged to Jesus. Under the Old Covenant, they were numbered among God’s called-out people, to whom He spoke through the prophets (Heb 1:1).  Now, having come to Jesus in faith, and having been saved by His grace, they were Christians and the writer tells that God speaks to them through His Son (Heb 1:2).

Num 15:29-31  You shall have one law for him who sins unintentionally, for him who is native-born among the children of Israel and for the stranger who dwells among them.  But the person who does anything presumptuously, whether he is native-born or a stranger, that one brings reproach on the LORD, and he shall be cut off from among his people. Because he has despised the word of the LORD, and has broken His commandment, that person shall be completely cut off; his guilt shall be upon him.

No Sacrifice for Willful Sin?

A Warning and a Question

Hebrews 10:26 must be read and understood in the context of the entire letter and in light of the New Covenant which replaced the Old Covenant.  The readers of this letter would have understood the writer’s call to remember the Old Covenant law about willful sin and its penalty (being cut off). This clearly shows how serious a wilful sin was in God’s eyes.

The writer then raised a frightening question:

Heb 10:29  Of how much worse punishment, do you suppose, will he be thought worthy who has trampled the Son of God underfoot, counted the blood of the covenant by which he was sanctified a common thing, and insulted the Spirit of grace?

The writer was asking, if wilful sin was such a serious sin under the Old Covenant, how much more so under the New Covenant? And he suggests that a Christian who sins willfully, trampling the Son of God, considering Jesus’ blood “a common thing,” and insulting the Spirit, should receive greater punishment.  So true. But does one?

“The LORD will judge His people.”

The writer continues by saying it is “a fearful thing to fall into the hands of the living God” (Heb 10:31) and reminds the reader that God said “Vengeance is Mine, I will repay,” and “The LORD will judge His people.”

So how should we understand all this?

We start by remembering that which we know to be clear and true. Christians have already been judged by God for salvation.  Their sins were paid for by Jesus on the cross and their sins (past, present, and future) were forgiven when they repented and came to Jesus in faith.  All the sins of a repentant sinner are washed away by the Lord’s blood and the forgiven sinner has received the Lord’s righteousness to be made worthy of eternal life in Heaven.  Additionally, the new Christian is eternally secure in Christ, because Jesus has promised to never leave or forsake them (Heb 13:5b).  So even when a Christian commits a willful, defiant sin, God will never cut the person off.  (Read: What is eternal security/assurance of salvation? Can I lose salvation?)

The Writer’s Purpose for This Warning?

Hebrews 10:26ff was intended to warn the people by calling them to remember the consequences of willful sin under the Old Covenant.  These were Jews. They understood the old ways.  The Temple was still standing at the time this letter was written. And sadly, at this time, some Jews were trying to go back to Old Covenant laws and practices. They were not understanding the liberty they had in Christ.  For these reasons, the Book of Hebrews compares the two covenants and teaches that the New Covenant has replaced the Old Covenant (Heb 8:13).

Again, the writer was trying to get these Hebrew Christians to turn from their old practices and trust only in their new standing — being free and secure in Christ under the New Covenant. We know this because the writer admonished them to stand firm [commentary inserted in brackets]:

Heb 10:35-39  Therefore do not cast away your confidence [your standing under the New Covenant], which has great reward [eternal life with Jesus]. For you have need of endurance [you need to stand strong], so that after you have done the will of God, you may receive the promise [Not the promise of salvation. They already had that. Rather, the promise of rewards for service to God]: “For yet a little while, And He who is coming will come and will not tarry. [Jesus will come again. The writer then adds…] Now the just shall live by faith; But if anyone draws back [sins willfully], My soul has no pleasure in him.”

Not Living by Faith

Those Christians who “draw back” are those who fail to live by faith.  In the next chapter, the writer continued his letter by giving Old Covenant examples of those who lived by faith and by telling that “without faith, it is impossible to please [God]” (Heb 11:6).  And so, the writer closed his warning with encouragement and a reminder to his readers:

The writer’s message for the people of his time (and for us) is, remember who you are!  You belong to Jesus Christ and you live under the New Covenant!!! Paul wrote the same thing to the Galatians:

Gal 5:1  Stand fast therefore in the liberty wherewith Christ has made us free, and be not entangled again with the yoke of bondage.

It’s not surprising that the writer continued his letter with examples of the faithfulness of those who have gone before us (Hebrews 11). These examples encourage and empower us to live in the joy of our salvation and to serve God with a joyful heart. (Read words from the saints in Heaven: Words of Wisdom from the Cloud of Witnesses; Read about the Hebrews 11 Saints in Heaven: Abraham, Isaac,  Jacob,  Joseph, and more)

Hebrews 10:26 is not about the possibility of losing one’s salvation (although some try to make it say that).  It is a warning to Hebrew believers in Christ:  do not  return to Jewish Temple worship and animal sacrifice.   By returning to such practices, they were denying the sufficiency of Jesus’ atonement.

Since Christ fulfilled the sacrificial system, there remains no more animal sacrifice for sins.  Only a short time after the writing of this letter to the Hebrews, the Old Covenant practices of animal sacrifice were abolished with the destruction of the Temple and the dispersion of the Jews.

My Warning and Encouragement

Don’t read the Book of Hebrews as if it is written to you.  It was written in the first century to a very specific people group — Jews who had become Christians.  However, do understand that while this letter was not written TO you, it was preserved FOR you.  It has been preserved for your instruction in righteousness.

Read this letter and learn what the writer teaches about Jesus. His intent was to:

Let this be your understanding of the Book of Hebrews.   Pastor Tim Keller has beautifully proclaimed the superiority of Jesus with his declaration that “Jesus is the true and better…”  Click on the image for the full-size image. 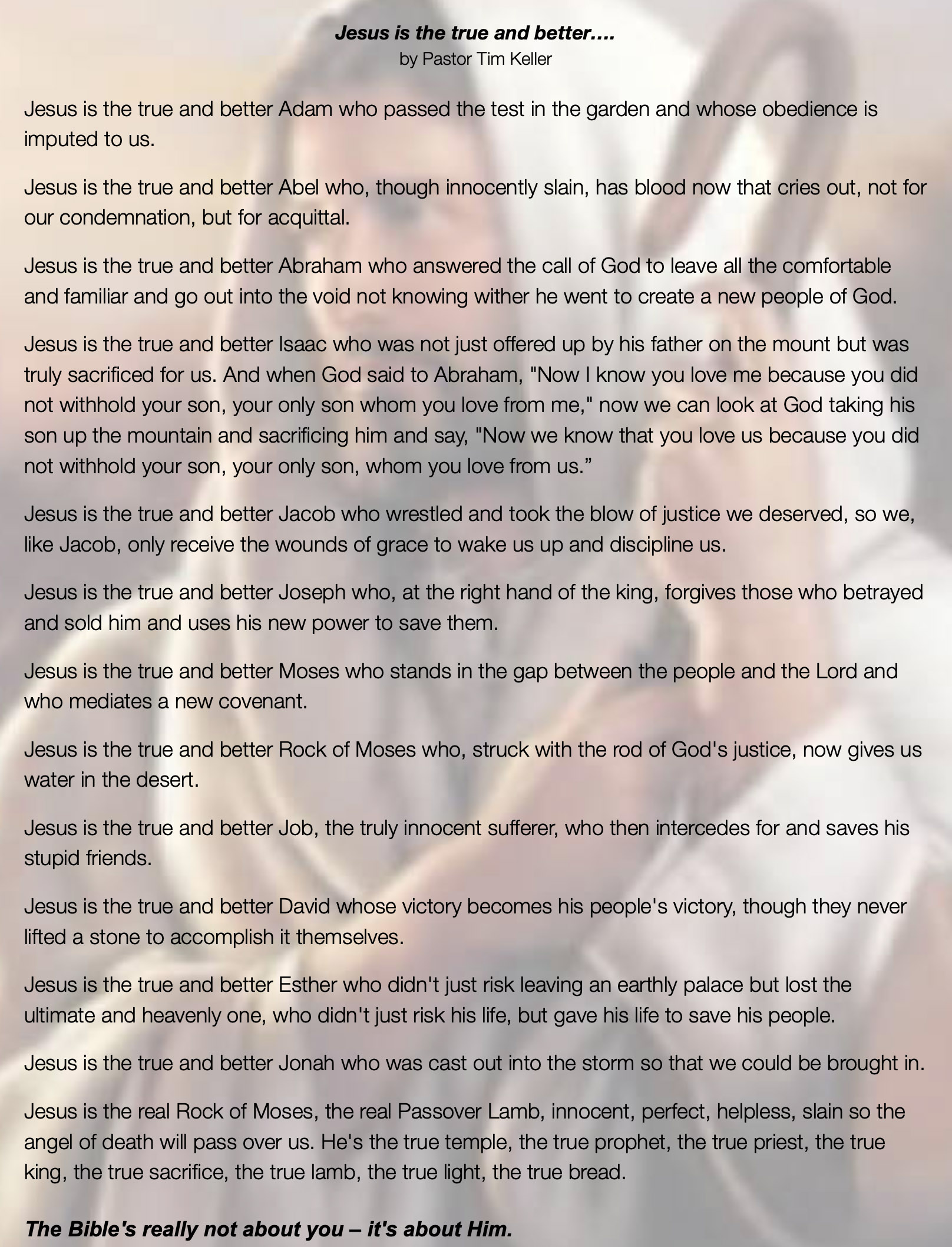