Does There Need to be Two or Three Gathered Together for Jesus to be Present? (Matt 18:20) – A Misunderstood Verse 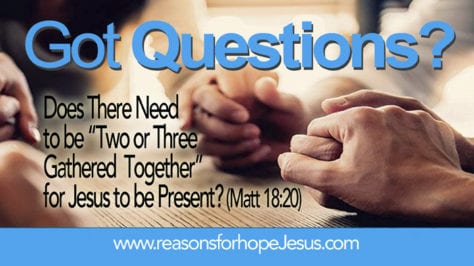 Before explaining this verse in context, let’s answer the question, “Does there need to be two or three gathered together for Jesus to be present?”  The answer is “no.”  Jesus is present with every believer by the power of His Holy Spirit and He will never leave us (Hebrews 13:5). Therefore, Jesus is no more present when two or more are gathered than when one person is by him/herself.

So why did Jesus say,  “where two or three are gathered together in my name, there am I in the midst of them” (Matthew 18:20)?

Jesus’ words must be understood in the historical context in which He spoke them.  This was during Jesus’ earthly ministry.  This was before His death, burial, and resurrection and it was before the Holy Spirit was given to indwell believers.  Jesus spoke these words while living a human life on earth.

It must be noted that there was no possible way for Jesus to have been in two (or more) places simultaneously.  If a group of three was gathered in Jerusalem and another group of three in Bethlehem, it would have been impossible for Jesus to be present with both groups at the same time.  So what was Jesus promising?

To answer this we must look at the entire passage.  Let’s back up to the beginning of chapter 18 of Matthew.  Jesus was answering the question the disciples asked, “Who is the greatest in the kingdom of heaven?” (Matt 18:1). Jesus began by giving the illustration of being childlike and He said that man must humble himself in order to enter the Kingdom of Heaven (verses 3-5).  Jesus continued by talking about sins in verses 7-10. He said it is better to cut off that which causes the offense (an eye or a hand) than to enter into hell with it. Then Jesus told that God desires none to perish and He gave the illustrations of a shepherd seeking after a lost sheep (verses 11-14).

Up to this point, Jesus was speaking about man’s sins against God and man’s need for forgiveness and salvation from God.  Jesus then spoke about man’s sins against His neighbor.  He laid out a clear process for the mediation of conflicts, including the need for repentance of sins and the restoration of those in conflict.  Jesus said the process begins with the offended meeting with the offender to discuss the matter (Matt 18:15).  If that is not successful, then the offended is to take one or two others with him.  They would serve as witnesses, which was required by Levitical law (one witness was not sufficient).

Deu 19:15  One witness shall not rise against a man concerning any iniquity or any sin that he commits; by the mouth of two or three witnesses the matter shall be established.

Jesus clearly quoted this law, when He said, “But if he will not hear, take with you one or two more, that ‘by the mouth of two or three witnesses every word may be established.'” (Mat 18:16)

This is the authority that was given to Peter in Mat 16:19. Now authority was being given to all of the disciples, along with a requirement for a due process (“two or three witnesses”). In this context, binding and loosing has a judicial meaning.  Binding would be similar to declaring someone guilty.  Loosing means they have been released because they are not guilty.  Giving the disciples the authority to bind or loose is giving them the authority to judge.

Next, we read Jesus’ words about two who are in agreement and are petitioning God.  Jesus tells that God will answer them.

Mat 18:19  “Again I say to you that if two of you agree on earth concerning anything that they ask, it will be done for them by My Father in heaven.”

Finally, Jesus proclaims His presence among the gathering of two or three in His name.

Mat 18:20  “For where two or three are gathered together in My name, I am there in the midst of them.”

This verse is not about Jesus being present. It is about Him giving the disciples authority in matters of dispute. In the context of telling them the due process to administer judgment and justice according to Levitical law (two or more witnesses), then reminding them to seek God (vs 19),  Jesus is telling them they will have His authority (Mat 18:20  “For where two or three are gathered together in My name, I am there in the midst of them.”)

Remember, this verse could not be about Jesus’ physical presence as it seems to read.  In His humanity, Jesus was not omnipresent.  He had set aside such aspects of His divine nature.  It would have been impossible for Him to have been in multiple places at the same time.

Now, you might be thinking, in His glorification, Jesus is omnipresent. So isn’t it correct to use it to declare Jesus’ presence when two or three gather?

The reasons for this being a misapplication of the verse is two-fold: