Joseph in the Hall of Faith (Hebrews 11) 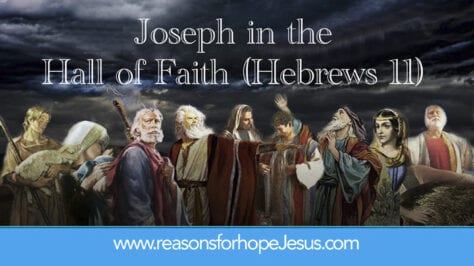 Joseph is one of the most outstanding men in the Bible and he is most certainly worthy of inclusion in God’s Hall of Faith.

It’s interesting that the Holy Spirit includes Joseph’s end-of-life words and not his major life experiences that revealed his faith during his youth, young adult, and mature years.

Joseph was the firstborn son of Rachael, Jacob’s favorite wife.  Another son, Benjamin, was born but Joseph was the one his father favored.  He gave Joseph a coat of many colors, arousing jealousy in the hearts of his ten older brothers.  Furthermore, Joseph had a dream that implied he would rule over his elder brothers.  That increased their envy and resentment toward him and culminated in their desire to kill him. But instead, they sold Joseph to foreign traders.  Joseph experienced the death of his dream as he was separated from his loving father and was sold into slavery in Egypt.  In that distant and pagan culture, Joseph could have easily renounced his faith in God, but he did not. Joseph continued to hope and believe in the God of Abraham, Isaac, and Jacob even though there was no visible evidence to do so.   He continued to believe that God was real and that He is a rewarder of those who diligently seek Him (Heb. 11:1,6).

Joseph’s brothers sold him to Midianites who later took him to Egypt (Gen 37:28) and “sold him in Egypt to Potiphar, an officer of Pharaoh and captain of the guard” (Gen 37:36). But Joseph didn’t curl up into a fetal position and have a pity-party.  Instead, he set about being the best slave Potiphar had!  God blessed his faith and ambition, and his master promoted Joseph and placed him as overseer of his entire household.

Biblical faith often involves waiting, but not in idleness.  Faith involves believing God explicitly and behaving accordingly and faith works while it waits.  Faith diligently seeks God while dutifully serving others, and God eventually rewarded that because He is a rewarder of those who labor diligently in faith, (Heb. 11:6).  Prov. 12:24 says… “The hand of the diligent will rule, but the lazy man will be put to forced labor.”

As Joseph continued as an ambitious and effective overseer, Potiphar’s wife noticed this handsome, young Hebrew man.  As time went on, she quietly lusted after Joseph, and eventually tried to seduce him.  Joseph repeatedly refused her advances which infuriated her. She then tried to frame Joseph and blame him for trying to force himself on her, which, of course, was a complete lie.  Potiphar put Joseph in prison even though he suspected he was innocent.

Here we see the reality that a child of God can do the right thing and still end up in a “fiery furnace,” a “lion’s den,” or a “prison.”  But did God forsake Joseph?  No, He had a long-term purpose for Joseph that He would fulfill in the proper time (Rom. 8:28).  Did Joseph get mad at God and sink into a deep depression?  No, he went right to work being the best prisoner he could be!  He was such an outstanding man of character that the keeper of the prison put Joseph in charge of all the other prisoners, believing that Joseph’s God was with him and caused him to prosper.  So even in prison, Joseph experienced the Lord’s presence, promotion, and prosperity.  But it still required a lot of waiting.  Altogether, Joseph spent 13 years as a slave and prisoner. But then things changed!

Joseph Waited in the Palace

How did Joseph go from prison to the palace? From being the prison overseer to being the Prince of Egypt, second only to Pharoah, the king of the most powerful nation in the world at that time?  The only plausible answer is…God.

Almighty God did this because He is Lord of All, including the nations and those who lead them.  Ps. 75:6-7 says… “For exaltation (promotion) comes neither from the east nor from the west nor from the south, but God is the Judge; He puts down one, and exalts (promotes) another.”

While in Egypt God blessed Joseph with a wife, Asenath, and two sons, Ephraim and Manasseh, were born.  They would be important to the rise and continuation of the nation of Israel.

In spite of Joseph’s promotion and blessing, Joseph still had to exercise faith—“the substance of things hoped for” (Heb. 11:1).  As he occupied the palace, Joseph hoped for reconciliation, reunion, and rebuilding.

Reconciliation with his Brothers

A world-wide famine brought Joseph’s brothers to Egypt in search of food (Gen 42-45).  Not recognizing Joseph, the brothers fulfilled Joseph’s prophetic dream and bowed down to him.  Although Joseph’s brothers did not recognize him, Joseph recognized his brothers. Through a series of circumstances and a little bit of theatrics, Joseph revealed himself to his brothers, forgave them for selling him into slavery 20 years earlier, and celebrated a wonderful reunion with his family.

Reunion with his Father

Gen. 46 tells of Joseph’s emotional reunion with his father, Jacob.  Jacob thought Joseph had been killed by a wild animal as a youth. So when he saw his beloved son alive and well, they embraced and wept.  Jacob, then 130 years old, said, “Now let me die, since I have seen your face, because you are still alive!” (Gen 46:30)  But Jacob did not die.  He lived another 17 years and gave a meaningful blessing to all 12 of his sons before he died.

Rebuilding of a Nation (Israel)

Genesis 47 tells us how Jacob and his family of 70 dwelt in Egypt.  They were given the territory of Goshen which was the most fertile land in the country, and God blessed them so that they “grew and multiplied exceedingly” (Gen. 47:28).  Chapters 48-50 tell how Jacob asked his 12 sons to gather around his deathbed so he could bless them.  His blessings prophesied the growth, character, and development of the 12 tribes.

In the process of blessing to Joseph and his two sons, Jacob said (Gen. 48:21),… “Behold I am dying, but God will be with you and bring you back to the land of your fathers.”

Joseph, despite his stature and royalty in Egypt,  never forgot that he was a son of Jacob, an Israelite.  On his deathbed, by faith, “Joseph said to his brethren, ‘I am dying, but God will surely visit you and bring you out of this land to the land of which He swore to Abraham, to Isaac, and to Jacob.’ Then Joseph took an oath from the children of Israel saying, ‘God will surely visit you, and you shall carry up my bones from here.’” (Gen. 50:24-25)  And this happened generations later in Israel’s exodus from Egypt (Ex 3:19).

Joseph was a man of great faith, and he demonstrated his faith, waiting on God to fulfill His promises, even unto his last breath.

Heb 11:22  By faith Joseph, when he was dying, made mention of the departure of the children of Israel, and gave instructions concerning his bones.