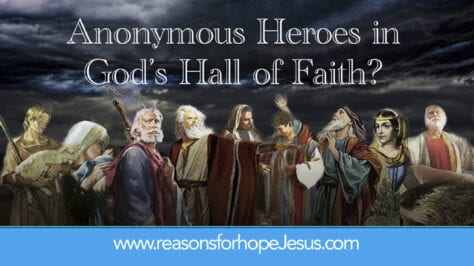 Hebrews 11:35 seems to be a pivot-point in the chapter.  Most of the heroes and heroines mentioned before verse 35 exercised courage and faith that was rewarded with miraculous deliverance.  The turning point in verse 35 hinges on the word “others.”

Hebrews 11:35  …others were tortured, not accepting deliverance, that they might obtain a better resurrection.

Previously-mentioned heroes worshipped, walked, worked, wandered, waited, wed, willed, and warred by faith. These “others” are described as having been “tortured, not accepting deliverance…” but with hope, “that they might obtain a better resurrection.”  The implication is they may have been offered deliverance but refused, choosing rather to accept death by martyrdom, than a deal by manipulation.  That reveals great courage and explicit faith!  Let’s take a closer look.

Hebrews 11:36  Still others had trial of mockings and scourgings, yes, and of chains and imprisonment.

This sounds a lot like Jesus who endured all of these things and more.  But Jesus warned His disciples that since the world hated Him, they would also hate them (John 15:18-19).  Certainly, the apostle Paul suffered these things during his missionary journeys recorded in the book of Acts.

This could refer to a number of martyrs, but we might first think of Stephen, who was the first martyr. His story is told in Acts 6 and 7.  Stephen was one of the original seven deacons in the church at Jerusalem.  He was especially effective in handling the arguments of the religious leaders who arrested him and brought him before the council of the Sanhedrin. With his final words, he gave such a powerful and convicting message that they could not withstand him or contradict his message.  They were so incensed that they rushed upon him, drug him outside, and stoned him to death.  He died in faith,… “calling on God and saying, ‘Lord Jesus, receive my spirit.’”

Scripture does not identify the names of those who were tortuously slain in this manner, but clearly states they were.  Jewish tradition states that Isaiah was horribly killed by being gruesomely cut in half.  The Bible tells that Isaiah served during the reign of several kings, most of whom were good, but eventually, Manassah became king. He was one of the most wicked kings in Israel’s history, and he reportedly ordered that Isaiah be sawn in two.  This kind of savagery has returned under radical Islam.  Everyone outside of the Muslim religion is considered an infidel, and some who dare to refuse to yield to the authority of the Koran and the prophet Mohammad, are barbarically beheaded, literally sawn in two with a knife or sword.

An example of this was Naboth.   The story of Naboth is found in 1 Kings 21.  Naboth owned a vineyard close to King Ahab’s property and Ahab desired Naboth’s adjoining garden.  He made several offers to buy it, but Naboth refused and cited Hebrew law requiring that they do not remove the ancient landmarks handed down by their ancestors.  Wicked Queen Jezebel, Ahab’s evil wife, talked her husband into executing Naboth on false charges and then taking over the vineyard by force.  Naboth lost his life but his integrity was intact, and scripture honors his courage and faith.

This could be said of many of God’s saints.  Specifically, we should think of one of the original 12 disciples, James. He was imprisoned by the wicked King Herod and killed with the sword by Herod’s decree (Acts 12:1-3).

Hebrews 11:37, 38  …They wandered about in sheepskins and goatskins, being destitute, afflicted, tormented
{38} of whom the world was not worthy; they wandered in deserts and mountains, in dens and caves of the earth.”

John the Baptist lived in the wilderness, dressed in camel hair, and ate locusts and wild honey.  He was a fearless preacher of righteousness and the forerunner of the Messiah, Jesus Christ.  He was arrested, put in prison, and gruesomely beheaded by King Herod.  Jesus said that John was the greatest prophet and human being who ever lived (Matt 11:1-11).

Though these heroes described at the end of Hebrews 11 are unnamed and unidentified to us, God knows each of their names, and will reward them according to their faith and obedience.

Chapter 11 of Hebrews concludes with these powerful words:

Heb 11:39-40  And all these, having obtained a good testimony through faith, did not receive the promise,  God having provided something better for us, that they should not be made perfect apart from us.

We who live in The United States of America have been sheltered from the danger, suffering, and torture that those in God’s Hall of Faith experienced.  But many in the world today are being savagely afflicted, tortured, and martyred for their faith in Christ.   May God help us to lift up persecuted brethren in prayer and be bold witnesses for Christ wherever and however we can.

O Jesus, I Have Promised

O Jesus, I have promised to serve thee to the end;
be thou forever near me, my Master and my friend.
I shall not fear the battle if thou art by my side,
nor wander from the pathway if thou wilt be my guide.

O let me see thy features The look that once could make
So many a true disciple Leave all things for thy Sake;
The look for that beam’d on Peter When he thy name denied;
The look that draws thy loved ones Close by the pierced side.

O let me see thy footmarks, And in them plant mine own;
My hope to follow duly Is in thy strength alone;
O guide me, call me, draw me, Uphold me to the end,
And then in heaven receive me,  My Savior and my friend.