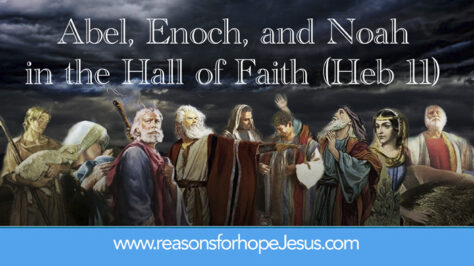 Hebrews 11 begins with, “Now faith is the substance of things hoped for, the evidence of things not seen”. (Read the first article in this series: Who are Heaven’s Heroes in God’s Hall of Faith?)  Christian faith is not blind faith; it has substance and evidence, based on the promises and character of a flawless, faithful God.  It is abundantly clear from Scripture that God puts a premium on faith; without it, we cannot please God or be in paradise with God in the next life.  Faith honors God and God honors faith.   In this article, we will look at three men Abel. Enoch, and Noah who honored God by their faith, and God honored them by placing them in His eternal Hall of Faith.

Hebrews 11:4 By faith Abel offered to God a more excellent sacrifice than Cain, through which he obtained witness that he was righteous, God testifying of his gifts; and through it he being dead still speaks.

The first member in God’s Hall of Faith comes from the first family on God’s newly-created earth.  God made Adam from the dust of the earth, then He made Eve.   The Lord told them to tend the garden and be fruitful and multiply.

We all know the account of the fall. Adam and Eve sinned and were cast out of the Garden. However, they did obey God’s command to be fruitful, and Eve soon gave birth to 2 boys, Cain and Abel.  Cain became a tiller of the soil and Abel a shepherd.  When the time came to make a sacrifice (Gen 4:3),  Cain brought a sacrifice to God of the fruit of the ground.  Abel, however, brought a lamb, realizing the necessity of a blood sacrifice.  God did not accept Cain’s offering but did accept Abel’s.  Cain became furious and resentful, and one day he murdered his brother Abel.

Abel’s faith is an example to us all, and the Holy Spirit includes Abel as the first inductee into God’s Hall of Faith in Hebrews 11.  Abel’s choice to offer a blood sacrifice is a witness to his genuine faith, testifying that he was righteous in the sight of God.  What can we learn from Abel? Saving faith requires a blood sacrifice (Heb. 9:22). And though saving faith likely results in persecution (2 Tim. 3:12), it leaves a godly witness as we worship by faith.  Jesus said the Father is seeking those who will worship by faith, in spirit, and in truth. John 4:23-24.

Hebrews 11:5 By faith Enoch was taken away so that he did not see death, and was not found, because God had taken him; for he had this testimony, that he pleased God.

Enoch is one of two people who did not die (the other is Elijah).  As he walked with God one day,  the Lord miraculously snatched him up and took him to be with Him permanently in Heaven!

So what was the outstanding characteristic of Enoch?  Scripture says… “he walked with God”, and he did it faithfully for at least 300 years, a model of consistency.  Now, what does it mean to ‘walk’ with God?

Enoch had a close relationship with God and enjoyed intimate fellowship with God on a daily basis.  The hymn writer wrote, “O how sweet to walk in this pilgrim way, leaning on the everlasting arms; O how bright the path grows from day to day, leaning on the everlasting arms!”   What a privilege it is to be a child of the King!   How wonderful it is to know that we can have an audience with the Lord of Lords at any time!  Jesus said, “Behold I stand at the door and knock; if anyone hears my voice and opens the door, I will come into him, and dine (commune) with him, and he with Me.”

Enoch didn’t walk ahead of, or behind God.  He didn’t meet God on the path while going the opposite way.  He walked with God, denoting he stayed close by His side, and he was heading in the same direction.  What a beautiful thing that is!  Again, another familiar hymn says…

Wow, to walk and talk with our Heavenly Father and loving Creator is truly when heaven seems to come down and glory fills our soul!

Enoch did all of this by faith.  May it be said of us that we walk with God and please Him in all that we say or do.

Hebrews 11:7  By faith Noah, being divinely warned of things not yet seen, moved with godly fear, prepared an ark for the saving of his household, by which he condemned the world and became heir of the righteousness which is according to faith.

We learn from the sixth chapter of Genesis that the people of the earth had become terribly corrupt, to the point that God decided to destroy virtually all of mankind and start over with one man, Noah, and his family. Only Noah found grace in the sight of the Lord because, like Enoch, he walked with God in believing faith.

God told Noah to build an ark, an enormous boat that would house all of his family, and two of all other living-breathing creatures. In the ark, they could survive the Great Flood and afterward replenish the earth.

There is a lot we can learn from Noah, a great man of faith.  We too have been divinely warned, “the wages of sin is death” (Romans 3:23a).  That’s the bad news.  We should also be moved by fear, “The fear of the Lord is the beginning of wisdom” (Prov. 1:7a).

We also should make preparations to avoid judgment. Prepare to meet your God (Amos 4:12). It is appointed for men to die once, but after this the judgment (Heb. 9:27).  Our passion should be to help others prepare to avoid judgment by repentance and faith:

Believe on the Lord Jesus Christ, and you will be saved, you and your household (Acts 16:31).

And we can rejoice in our eternal salvation and security as we “become heirs of the righteousness which is according to faith” (Heb 11:7). “for whoever shall call upon the name of the Lord shall be saved” (Romans 10:13).