Amram and Jochebed in the Hall of Faith (Hebrews 11) 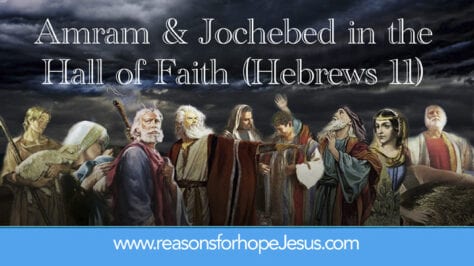 Some of the Bible characters in God’s Hall of Faith are not mentioned by name.  That is the case regarding the parents of Moses.

Heb. 11:23  By faith, Moses, when he was born, was hidden three months by his parents, because they saw he was a beautiful child, and they were not afraid of the king’s command.

So who are Moses’s parents?  Fortunately, they are named in other Scripture passages.

Numbers 26:58-59  These are the families of the Levites…and Kohath begot Amram.  The name of Amram’s wife was Jochebed, the daughter of Levi, who was born to Levi in Egypt; and to Amram she bore Aaron and Moses, and their sister Miriam.

Amram and Jochebed were the parents of Aaron, the first high priest of the nation of Israel; Moses, who led Israel out of bondage in Egypt, across the Red Sea, and through the wilderness wanderings; and Miriam, the first song leader of Israel.

Why Amram and Jochebed?

What merited Amram’s and Jochebed’s inclusion in God’s Hall of Faith is described in Exodus 2:1-10 and summarized in Heb. 11:23.  The parents of Moses had such great faith in God that they fearlessly obeyed Him and not Pharaoh. Let’s look at their commendable works, and why they are remembered as parents of faith.

They Believed in the Sanctity of Life

The birth of a baby is a much-anticipated event.  From conception to birth, excitement builds.  Amram and Jochebed already had two children, Miriam and Aaron, as they awaited the birth of another child.  Because the king had issued a command to kill every baby boy at birth, they had to be feeling agonizing emotions.

Most of us would agree that hiding a baby would be very difficult! A baby does not always cooperate, especially when he is hungry, uncomfortable, or scared. Plus, babies cry, sometimes very loudly!  So in a desperate attempt to preserve their baby’s life, Moses’s parents… “took an ark of bulrushes for him, daubed it with asphalt and pitch, put the child in it, and laid it in the reeds by the river’s bank” (Ex. 2:3).  They hoped his crying would be out of earshot of the governmental authorities.  It was their sincere attempt to perform the duty of parents to protect and provide for their children.

I think every parent sees their child as beautiful.  How can anyone ignore or disparage the miracle and beauty of birth, when a precious little life comes into the world?  Why has our country made abortion legal when everyone is supposedly guaranteed the right to life, liberty, and the pursuit of happiness?  How is it that we no longer protect the pre-born, the most innocent and defenseless among us?  And how is it that a mother’s womb, that is designed by our Creator to be a place where life is nourished and cherished, has become one of the deadliest places to be in America?  It is no accident that the Holy Spirit elected to single out the faith of two courageous parents, Amram and Jochebed, who went to great lengths to protect their baby from the diabolical schemes of a wicked king and an unjust society.

Amram and Jochebed Believed in the Supremacy of the Lord

Once again, let’s remember this king was Pharoah, King of Egypt, the greatest ruler of the most powerful nation on earth.  Amram and Jochebed were slaves in a foreign land with no status or influence.  They were subjected in bondage to a wicked king who decided to have innocent male babies murdered at birth just to control the population of the lowly Hebrews who might otherwise be a threat because of their numerical growth.  But because of their faith….

Amram and Jochebed  Did NOT Fear the King of Egypt

If Amram’s and Jochebed’s heroic efforts to save Moses were discovered and reported, Pharoah could have had the whole family executed as an example to deter Israelites from disobeying his commands.  Despite that, Amram and Jochebed did not bow to the heinous edict of this intimidating monarch.  They remind us of the brave apostles of the early church.  They were commanded not to preach the gospel of Jesus Christ, but instead responded, “We ought to obey God rather than men.”

Amram and Jochebed  DID Fear the King of Kings…GOD

Amram and Jochebed had some fear of the king of Egypt, but they had much more fear and reverence for the King of Kings and Lord of Lords!  This is fundamental to faith and logic.

Deut. 6:2  That you may fear the Lord your God, to keep all His statutes and His commandments which I command you, you and your son and your grandson, all the days of your life, and that your days may be prolonged.
Prov. 9:10  The fear of the Lord is the beginning of wisdom, and the knowledge of the Holy One is understanding.
Eccl. 12:13 sLet us hear the conclusion of the whole matter; Fear God and keep His commandments, for this is man’s all.
Heb. 12:28  Therefore since we are receiving a kingdom which cannot be shaken, let us have grace by which we may serve God acceptably with reverence and godly fear.

Again and again, the Bible urges us to fear God first and foremost, above anyone and anything.  The apostle Paul wrote to his young protégé’ Timothy:  “and that from childhood you have known the Holy Scriptures which are able to make you wise to for salvation through FAITH which is in Christ Jesus.”

Amram and Jochebed could be called “unsung heroes.”  Their names aren’t even mentioned in Hebrews 11.  They are simply referred to as “his [Moses’s] parents.” Thankfully they are mentioned by name in Exodus 2:1-10 and Numbers 26:58-59. We read that they birthed and raised three remarkable children; Miriam, Aaron, and Moses who were used by God to make Israel into a large and formidable nation, and to lead them out of bondage in Egypt and through the wilderness.  How did this modest Jewish couple do this?  It was by faith.