Hope! What is it good for? Absolutely… 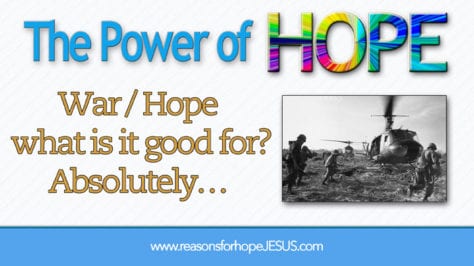 What is it good for?

Remember those lyrics?  They’re from the 1969 protest song, “War,” by Edwin Starr (It was also recorded by The Temptations and years later by Bruce Springsteen.

I’m sure there are many who remember the song.  Even the younger generation my have heard the song’s call to answer the question, what is war good for?   Interestingly, in the song’s lyrics the name of God is invoked, referencing Him as “good God”” and stating that the “Lord knows there’s got to be a better way” [meaning, a better way than war to keep our freedom].  When I found the lyrics online, I noted that “God” was written with a capital G.  It seems Edwin Starr (who wrote the song) knew, or at least respected, God.  And, it should be noted that back in the 60s when people spoke of God, it was almost always a reference to the God of the Holy Bible.

Setting aside the song’s references to God (I’ll let you can decide if the song is respectful or not), the words made me think about the disparity between war and hope!  The song is clearly an anti-war song.  The lyrics cry out about the tragedy and despair of death during the Vietnam War, and  I remember that time well.  I experienced the reality of it personally at the funeral of a friend’s brother who didn’t make it home alive.  The lyrics of the song cry out a lament of sadness and unrest in our country during the troubling days of the Vietnam War:

War, it ain’t nothing
But a heartbreaker
War, friend only to the undertaker
Ooooh, war
It’s an enemy to all mankind
The point of war blows my mind

Within the younger generation

Who wants to die

So where’s the hope?

Let’s reword the song’s question and ask, “What is hope good for?”  As Christians, our answer should be “Absolutely EVERYTHING.”

The name of our ministry is Reasons for Hope* Jesus and it was purposefully chosen to reflect our mission, which is based on 1 Peter 3:15…

…sanctify the Lord God in your hearts: and be ready always to give an answer to every man that asketh you a reason of the hope that is in you with meekness and fear:

Our mission is to equip Christians with answers about what they believe and to offer knowledge and understanding of true hope–the kind of hope that will never disappoint and will always uphold us.  That hope is not found in the answers we might have; nor is it not found in anything of this world.

True hope is found in a Person….the Person of the Lord Jesus Christ.  He is the reason for the hope that is in us and He is our hope.  It should always be our goal to know Jesus better and to love Him more.  Therefore, the answers and reasons that we give are always about Jesus — His Person and His works.

So why do many in this world think they can find hope in someone or something else?  Consider these closing words from the song:

War, it ain’t nothing but a heartbreaker
War, friend only to the undertaker
Peace, love and understanding
Tell me, is there no place for them today
They say we must fight to keep our freedom
But Lord knows there’s got to be a better way

“Lord knows there’s got to be a better way.”

Yes, the Lord does know there is a better way!  And we who belong to Jesus KNOW it also.  That better way IS Jesus.  He has told us that He is the way, the truth and the life (John 14:6) and that He will never leave or forsake us (Hebrews 13:5).  Now that’s the….

…and that’s what hope is good for!  Using a little poetic license, consider these words.

Hope, huh, yeah
What is it good for
Absolutely EVERYTHING
Say it again!

May the God of hope fill you with all joy and peace in believing,

that you may abound in hope by the power of the Holy Spirit. (Romans 15:13)