Samuel and David in the Hall of Faith (Hebrews 11) 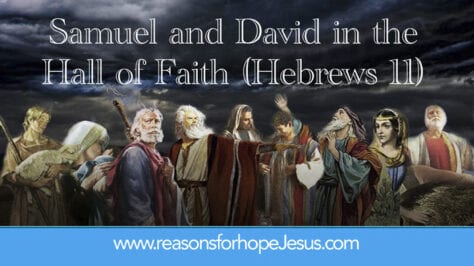 Samuel and David both wrote a great deal of Scripture. Both were godly men.  Samuel is often thought of as a man who earned Israel’s trust and David was said by God to be a man after His own heart.

Samuel Was A Special Child

The first chapter of 1 Samuel tells us that Samuel’s mother was Hannah, and she was barren. She prayed constantly and earnestly that God would give her a child.

Eli, the priest, saw Hannah weeping and praying at the tabernacle, and told her God had answered her prayer.  She returned home, conceived, and gave birth to a boy she named Samuel, meaning “God has heard.”  To show her gratitude to God, Hannah dedicated her son to the Lord and, after he was weaned, she took him to the tabernacle to be raised by Eli the priest.  Samuel grew to know and love God.  He served with distinction (God revealed Himself to him), and he became a bold and dependable spokesman for God.

Samuel Was The Last Judge

The period of the judges was mostly disastrous as Israel wallowed in the duel sins of idolatry and immorality.  But Samuel boldly called the nation to repent and be devoted to the one true God.

1Sam. 7:3-6… “Then Samuel spoke to all the house of Israel saying, ‘If you return to the Lord with all your hearts, then put away the foreign gods…and prepare your hearts for the Lord and serve Him only; and He will deliver you from the hand of the Philistines.’ So the children of Israel put away the Baals and the Ashtoreths, and they served the Lord only…they gathered together at Mizpah…and they fasted that day and said there, ‘We have sinned against the Lord’. And Samuel judged the children of Israel at Mizpah.”

Samuel Was The First Prophet

Samuel was  the last of the judges and the first of the Old Testament prophets.

1 Sam. 3:19-21   “So Samuel grew and the Lord was with him, and let none of his words fall to the ground.  And all Israel, from Dan to Beersheba knew that Samuel had been established as a prophet of the Lord.  Then the Lord appeared again in Shiloh; for the Lord revealed Himself to Samuel in Shiloh by the word of the Lord.”

Samuel Was A Prayer Warrior

Samuel distinguished himself as a man of prayer. Sometimes God answered his prayers publicly in dramatic ways.

1 Sam. 12:16-25… “Now therefore, stand and see this great thing which the Lord will do before your eyes. Is today not the wheat harvest?  I will call to the Lord and He will send thunder and rain, that you may perceive and see that your wickedness is great which you have done in the sight of the Lord in asking a king for yourselves.”

So Samuel called to the Lord, and the Lord sent thunder and rain that day, and all the people greatly feared the Lord and Samuel…then Samuel said to the people,

“Do not fear; you have done all this wickedness, yet do not turn aside from following the Lord, but serve the Lord with all your heart…for the Lord will not forsake His people for His great name’s sake, because it has pleased the Lord to make you His people. Moreover, as for me, far be it from me that I should sin against the Lord in ceasing to pray for you, but I will teach you the good and the right way. Only fear the Lord and serve Him in truth with all your heart; for consider what great things He has done for you. But if you still do wickedly, you shall be swept away, both you and your king.”

According to Jeremiah 15:1, God considered Moses and Samuel the greatest intercessors in Israel’s history.  Prayer warriors are scarce (Ezek.22:30-31, Luke 18:7-8), much-needed, and of great value in the sight of God.  We need more Samuels today!

David was the second and most famous of Israel’s kings.  He was anointed by Samuel and loved him, considering him a faithful friend and loyal supporter in word, deed, and prayer. 1 Samuel 16:8 tells about young David:

1 Sam 16:18  Then one of the servants answered and said, “Look, I have seen a son of Jesse the Bethlehemite, who is skillful in playing, a mighty man of valor, a man of war, prudent in speech, and a handsome person; and the LORD is with him.”

Jesse is first mentioned in the book of Ruth.  Ruth married Boaz and gave birth to Obed, who was the father of Jesse, the father of David. (Ruth 4:17-21).  From Scripture we learn that Jesse was a modest man, a sheepherder in the region of Bethlehem who had many sons. David was the youngest of whom.

Bethlehem is first mentioned as the place where Jacob’s wife, Rachel, was buried (Gen 35:19).  In the book of Ruth, we find Naomi, Ruth, and Boaz in Bethlehem.  In 1 Samuel, Jesse and David are from Bethlehem. And the prophet Micah prophecied that the Messiah would be born in Bethlehem (Micah 5:2 ).  Finally, take not that in Luke 2, Bethlehem is called “the city of David,” where Jesus was born!

At this time, King Saul was distressed and depressed, and his servants were assignedn “to seek out a man who is a skillful player on the harp”…in order to sooth the king’s troubled spirit.  While watching over the sheep, David, a naturally talented musician, would pass the time by playing, singing and composing music (“who is skillful in playing (the harp)…”).  David became King Saul’s personal musician.  Of course, many of David’s compositions became well-known and published in Israel’s songbook, the Psalms.

A this point, David was only a shepherd boy.  He was not yet a soldier, but he would become a “man of war.”  How was he already known as a “mighty man of valor?”  We don’t know but perhaps David’s two older brothers, who were in the military, had told stories about their brave, little brother who risked his life for the sheep.  We do know that when David volunteered to fight the giant Goliath, he told King Saul about how he killed both a lion and a bear that attacked his flock of sheep. This was a courageous young man and he knew that God would help him overcome Goliath as well.

Though David was very young, he was very wise, mature, and careful with his words (“prudent in speech…”). This was displayed often in his later experiences, especially in dealing with Saul. Saul was extremely jealous of David and pursued him with the intent to kill him. Given opportunities to kill Saul, David did not. Nor did he speak ill of him.

1 Sam. 24:10-12 “Look, this day your eyes have seen that the Lord delivered you today into my hand in the cave, and someone urged me to kill you; but my eye spared you, and I said, ‘I will not stretch out my hand against my lord, for he is the Lord’s anointed…see that there is neither evil nor rebellion in my hand, and I have not sinned against you, yet you hunt my life to take it.  Let the Lord judge between you and me, and let the Lord avenge me on you, but my hand shall not be against you.’”

David’s good looks were a gift from God, but he could have been proud or boastful about his appearance.  He wisely was not.  An example of a young woman who was gifted with beauty is Esther. God used her beauty to catch the eye of the King, and she became the queen, which put her in a position to help save the Jews.  Whatever our talents and gifts, or lack thereof, God knows what He is doing and we can be instruments in His hand to glorify Him and accomplish His sovereign purposes.

Even as a young man, it was obvious to all that the Lord’s hand was upon David, and he was devoted to his God (“and the Lord was with him”).  Though it’s true that God gifted and chose David for greatness, still David responded well. David showed remarkable self-control, maturity, ambition. and wisdom.  Human responsibility and sovereign oversight are both seen in 1 Sam. 18:14… “And David behaved wisely in all his ways and the Lord was with him.”

Samuel and David were no different than you and I.  They had strengths and weakness, failures and triumphs. But through it all they served God and loved Him with all their heart, and challenged others to do the same.  We have advantages Samuel and David did not have.

We have the indwelling Holy Spirit, the completed Scriptures, and the local church in which to worship, serve, and fellowship.

2 Peter 1:3 His divine power has given to us all things that pertain to life and godliness through the knowledge of Him who called us by glory and virtue…