Peter and the wolf? 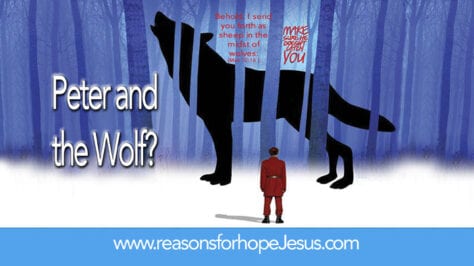 The apostle Peter is well known for his faith, trust, and enthusiasm, but also for his fear, denial, and even great distress. In his letters, Peter wrote about living the Christian life, about false teachers (wolves) and about the importance of faithful teachers (shepherds).

Peter certainly taught about the importance of being aware of the “big bad wolf,” Satan, and all the other wolves, false teachers.  In his second epistle, Peter wrote,

2 Peter 2:1-3  But there were also false prophets among the people, even as there will be false teachers among you, who will secretly bring in destructive heresies, even denying the Lord who bought them, and bring on themselves swift destruction.  And many will follow their destructive ways, because of whom the way of truth will be blasphemed.  By covetousness they will exploit you with deceptive words; for a long time their judgment has not been idle, and their destruction does not slumber.

Peter wrote this letter shortly before his martyrdom in 67 AD to warn the brethren of the heresies of false teachers. Prior to this letter, however, Peter wrote another — 1 Peter. He wrote to the persecuted and suffering saints in Asia Minor, and he wrote for a very different and very specific reason.  At the close of his first letter, Peter gave his purpose in writing:

1 Peter 5:12 … I have written briefly, exhorting, and testifying that this is the true grace of God wherein you stand.

Peter purposefully wrote to exhort the people to remember their standing in Christ.  He wrote of their position before God, the full assurance of their salvation, and the true grace of God.  It should be noted that 1 Peter focuses on that which is most important—man’s vertical relationship with God—while 2 Peter has great emphasis on man’s horizontal relationships with others.  Peter wrote first of God’s truth of the riches of salvation before he wrote to address the lies of false teachers.

We live during a time in which there is a growing amount of material written about discerning false teaching.  While it is important to identify teachings that oppose God’s Word, it should never supersede the importance of continually feeding our minds with the truths of God’s Word.  That was Peter’s message in his first epistle.  God’s truths will help us stand strong in our faith.  Peter wrote to disciples of the Lord Jesus Christ to strengthen and encourage them and closed his letter with an admonition to the church elders, telling them to think of themselves as shepherds who feed a flock of sheep.

The Shepherd and the Sheep

While Peter’s second letter addressed the wolves, his first letter addressed the wolves’ prey—the sheep—and he told how they are cared for by the Shepherd.  Some 30 years after the cross, Peter still remembered Jesus’ teaching about the Good Shepherd (John 10) and he also understood and took seriously the commission Jesus gave him when He said, “feed My sheep” (John 21)/

It should be of no surprise to us that in his first epistle Peter spoke both to the “sheep” and about the Shepherd.

1 Peter 2:25  For you were as sheep going astray; but are now returned unto the Shepherd and Bishop of your souls.

1 Peter 5:4  and when the Chief Shepherd appears, you will receive the crown of glory that does not fade away.

Peter, the Shepherd, and the Sheep

1 Peter 4:17  For the time is come that judgment must begin at the house of God…

Since the sheep belong to the Good Shepherd, we must correctly understand what Peter meant when he wrote of the judgment of God’s people.

The Bible tells of God using several kinds of “rods” to administer judgment. The authority of the Sovereign’s rod administers justice upon the heathen (Psalm 2:8-9, Revelation 2:27, 12:5, 19:15), but for God’s people, the Shepherd’s rod is a rod of authority.  This rod administers mercy and grace, compassion and care—all with the purpose of giving comfort.

In biblical times, a shepherd consistently used both a rod and a staff to tend his flock.  The purpose of the rod was to count the sheep and to direct them. The rod prodded them during the day in the fields and at night into the sheepfold.  A willing sheep would respond to the prodding, but a willful sheep would not.  That’s when the staff, with a crook at the end, would be used to more strongly exert the authority of the shepherd by gently, but firmly, pulling the sheep in the right direction.

Peter told that “judgment must begin at the house of God” (1 Peter 4:17) and that this is a judgment intended to turn God’s people from their sinful ways and to conform them to Jesus.  It is not a punitive judgment, but rather a corrective judgment.  When sheep stray, a shepherd always desires to prod them back onto the right path, to return them to the sheepfold, and to count them among those who are in His protective care.  The same is true for God’s sheep.  His Shepherd prods the wandering sheep back into his fold to abide with Him.

Will our Shepherd use His rod to direct us? Or will He need to use His staff to more firmly move us?  Whichever it is, we must always remember whose hand holds the rod and the staff.  It is the hand of the Good Shepherd,  the Bishop of our souls:

1 Peter 2:25  For ye were as sheep going astray; but are now returned unto the Shepherd and Bishop of your souls.

This epistle of Peter clearly reveals that Peter remembered Jesus’ teachings about the Good Shepherd and His sheep (John 10:11, 14).  Peter’s words also reveal that he remembered Jesus’ commission to feed His sheep. In addressing leaders in the churches in Asia Minor, Peter gave them the same commission:

1 Peter 5:1, 2  The elders which are among you I exhort…Feed the flock of God which is among you, taking the oversight thereof, not by constraint, but willingly…

Peter told them to feed and watch over the sheep.  Note that these are not Peter’s sheep, nor are they the church elders’ sheep.  These sheep belong to God.  They are “the flock of God.”  The flock includes all those who belong to the Good Shepherd, which should remind us that earthly “shepherds” are simply stewards who do the work of the Chief Shepherd (1 Peter 5:4).

Peter also reminded the elders of these churches that they must humble themselves before God (vs 5:5), trust God (vs 7) and stand strong against oppression (vs 8).   Not all Christians are elders in God’s church, but all are disciples who minister to others and therefore these lessons are applicable to every one of us.

As Peter began his letter, he reminded us that we are to “….gird up the loins of [our] mind[s], be sober, and hope to the end for the grace that is to be brought unto [us] at the revelation of Jesus Christ” (1 Peter 1:13).

Peter also exhorted us to “…speak as the oracles of God [the Word of God]; if any man minister, let him do it as of the ability which God gives…” (1 Peter 4:11) and to “be ready always to give an answer to every man that asks [us] a reason of the hope that is in [us] with meekness and fear.” (1 Peter 3:15)

God’s Word is the “food” that can nourish “the sheep of His pasture” (Psalm 100:3).  God’s Word will direct us and correct us.  It is both the “rod” and the “staff” that will comfort us, and it is used by the Good Shepherd to return us to, and keep us in, the fold of His loving protection–so that we might understand, gratefully receive and fully experience the “true grace of God wherein [we] stand.” (1 Peter 5:12)

While it is important that we discern false teachings, as Peter did in his second epistle, it is of utmost import that we first be “well-fed sheep” and that we closely follow our Good Shepherd, the Bishop of our Souls.

…the God of all grace, who has called us unto his eternal glory by Christ Jesus, after that ye have suffered a while, make you perfect, stablish, strengthen, settle you. To him be glory and dominion for ever and ever. Amen.  (1 Peter 5:10-11)