Daniel and His Friends in the Hall of Faith (Hebrews 11) 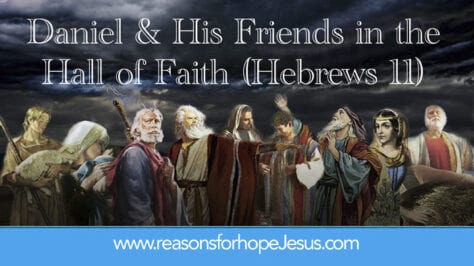 The writer of Hebrews began this portion of his letter (chapter 11) by defining and describing faith and then mentioning, by name, various outstanding men and women of faith. As he wrote his descriptions of those with great faith, some were unnamed and only brief descriptions given– as if he was running out of time and space.

Hebrews 11:33-34a… “who through faith subdued kingdoms, worked righteousness, obtained promises, stopped the mouths of lions, quenched the violence of fire…”

Though the people he described are unnamed, most Bible readers believe these verses are referring specifically to Daniel and his friends — the three Hebrew children, Shadrach, Meshach, and Abednego.  Let’s look at the accomplishments of these men of faith.

When the Babylonians wcame and conquered Jerusalem, Daniel was taken captive.  He and many of the choice, most talented young people were taken to Babylon to be indoctrinated into their culture and to be trained to serve their king.

Though Daniel was a captive in a foreign land, he maintained his allegiance to the God of his fathers, the Most-High God of Israel.  In doing so, he served and helped subdue two great empires— the Babylonian Empire and the Medo-Persian Empire.  Because of his unshakable faith in God, Daniel was able to hold great sway over two kings of Babylon— King Nebuchadnezzar and King Belshazzar, and also over two kings of Medo-Persia—King Darius and King Cyrus.

As a captive in a foreign culture, it would have been easy for Daniel to set aside his upbringing in Judaism and his devotion to the Holy One of Israel. But instead, we are told:

Daniel 1:8, “But Daniel purposed in his heart that he would not defile himself with the portion of the king’s delicacies, nor with the wine which he drank; therefore he requested of the chief of the eunuchs that he might not defile himself.”

One has to greatly respect Daniel for his dedication to God and His Word.

Daniel had an impeccable reputation for always doing the right thing.

Dan 6:3-5 says, “This Daniel distinguished himself above the governors and satraps because an excellent spirit was in him; and the king gave thought to setting him over the whole realm.  So the governors and satraps sought to find some charge against Daniel concerning the kingdom. But they could find no charge or fault because he was faithful, nor was there any error or fault found in him. Then these men said, ‘We shall not find any charge against this Daniel unless we find it against him concerning the law of this God.’”

What a tribute this was to Daniel!  What a faultless testimony he had!

One of the most foundational promises in the Bible is found in Proverbs:

Daniel honored God by faith. And God honored Daniel by giving him wisdom.

Dan. 1:17-20… “As for these four young men, God gave them knowledge and skill in all literature and wisdom; and Daniel had understanding in all visions and dreams…. Then the king interviewed them and among them all, none was found like Daniel, Hananiah, Mishael and Azariah; therefore they served before the king.  And in all matters of wisdom and understanding about which the king examined them, he found them ten times better than all the magicians and astrologers..”

Daniel Stopped the Mouths of Lions

This refers to the sixth chapter of Daniel that tells about Daniel in the lion’s den. Daniel had become such a trusted servant that the King planned to promote him to the chief of the wise men.  This made the other men jealous and they tricked King Nebuchadnezzar into making a law prohibiting prayer to any other god but the king for 30 days. If anyone did, they would be thrown into the den of lions. This, of course, was a setup to trap Daniel.

Daniel remained true to his God and continued to open his window and pray toward Jerusalem to the God of Israel.  His jealous coworkers saw him praying and turned him into the authorities.  King Nebuchadnezzar was so upset that he had fallen for their scheme, but he had to uphold the decree he had made. Therefore, Daniel was thrown into the lion’s den, which meant a sure and horrible death.

The king was so tormented in his thoughts that he couldn’t sleep that night. When he went to the lion’s den the next morning, he was so happy to hear the voice of Daniel…

Dan 6:22 “My God sent His angel and shut the lion’s mouths so that they have not hurt me, because I was found innocent before Him; and also, O king, I have done no wrong before you.”

Dan 6:23 So Daniel was taken up out of the den, and no injury whatever was found on him because he believed his God.

If anyone deserves to be in the hall of faith, certainly it is Daniel.

I think there is no doubt that this refers to the three Hebrew children— Shadrach, Meshach, and Abednego.  Just like Daniel, they were captives from Judah and bold witnesses for their God.  It was their brave devotion to God that landed them in the fiery furnace, and made for another one of the most well-known and dramatic stories in the Bible.

Fearless Faith in the Fire

King Nebuchadnezzar made a giant golden statue of himself, then gathered virtually the whole kingdom and demanded that all people fall down and worship the golden image. While everyone else bowed down to the king’s golden image, the three young men remained standing.  King Nebuchadnezzar was shocked at their brazen defiance of his command, but he gave them another chance.  In no uncertain terms, Shadrach, Meshach, and Abednego told the king they would never bow down to his image or to any other god, even if it meant dying in the fiery furnace.  They testified their God was able to deliver them from the furnace. But even if He didn’t, they would not bow down to the image.

King Nebuchadnezzar was so furious that he ordered his men to heat the furnace seven times hotter and throw the young men into the fire.  The fire was so hot that it killed the king’s men. But to the king’s amazement, he saw four men walking around in the furnace and he exclaimed, “I see four men loose, walking in the midst of the fire, and they are not hurt; and the form of the fourth is like the Son of God” (Dan. 3:23).

A Testimony from the  King

Dan 3:28 “Blessed be the God of Shadrach, Meshach, and Abed-Nego, who sent His Angel and delivered His servants who trusted in Him, and they have frustrated the king’s word, and yielded their bodies, that they should not serve nor worship any god except their own God.”

Applications for Our Lives