What is the Seventieth Week of Daniel? 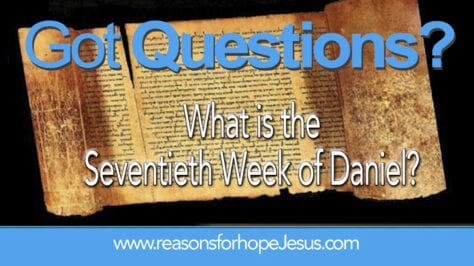 Daniel 9 foretells of a seven year period in Israel’s future that is commonly called the Seventieth Week of Daniel. The chapter begins by telling of Daniel’s understanding that Israel’s time of captivity in Babylon was coming to an end (Dan 9:2). Daniel prayed to God to hear, forgive, and be merciful to His people (Dan 9:19). As he prayed, he was interrupted  by the angel Gabriel:

Dan 9:20-22  Now while I was speaking, praying, and confessing my sin and the sin of my people Israel, and presenting my supplication before the LORD my God for the holy mountain of my God, yes, while I was speaking in prayer, the man Gabriel, whom I had seen in the vision at the beginning, being caused to fly swiftly, reached me about the time of the evening offering.  And he informed me, and talked with me, and said, “O Daniel, I have now come forth to give you skill to understand.

As the angel continued speaking, he prophesied of a far-future time that would include the arrival of the promised Messiah. He told it would happen after 69 weeks, and would be followed by a final seventieth week.

At the beginning of your supplications the command went out, and I have come to tell you, for you are greatly beloved; therefore consider the matter, and understand the vision: [24] Seventy weeks are determined For your people and for your holy city, to finish the transgression, to make an end of sins, to make reconciliation for iniquity, to bring in everlasting righteousness, to seal up vision and prophecy, and to anoint the Most Holy. [25] Know therefore and understand, That from the going forth of the command To restore and build Jerusalem Until Messiah the Prince, There shall be seven weeks and sixty-two weeks; The street shall be built again, and the wall, Even in troublesome times.

The Meaning of the Prophecy

First understand that the word “week” in the Hebrew mind signifies the number seven. This goes back to the creation week when God created everything in six days and rested on the seventh.  God set the pattern for life as a cycle of seven.  A “week” in the minds of ancient Israelites meant 7 in the same way that we understand “dozen” to mean 12.  Therefore, the prophesy of “seventy weeks,” in Daniel 9:24, means 70 x 7, or 490 years, just like we would understand 70 dozens to mean 70 x 12, or 840.

Sixty nine weeks (69×7=483 years) of this 70 week prophecy were fulfilled in Jesus’ first coming, when He was “cut off” (a Hebraism for “killed”), “but not for Himself.” (For us! A substitutionary atonement.) The 483 year time period (69 weeks) was precisely fulfilled on the day when Jesus rode into Jerusalem on a donkey heading toward the cross, i.e. the day we call Palm Sunday.

Dan 9:26 And after the sixty-two weeks [7 weeks having already passed] Messiah [Jesus] shall be cut off, but not for Himself…

In verse 26, the words of Gabriel shift dramatically.  He began to speak of the “the prince who is to come” during the Seventieth Week of Daniel, which is the time of Jacob’s trouble (Jeremiah 30:7), also known as the seven year Tribulation.

Dan 9:26-27 And after the sixty-two weeks [69 weeks] Messiah [Jesus] shall be cut off, but not for Himself; And the people of the prince who is to come Shall destroy the city and the sanctuary. The end of it shall be with a flood, And till the end of the war desolations are determined.  [27] Then he shall confirm a covenant with many for one week; But in the middle of the week He shall bring an end to sacrifice and offering. And on the wing of abominations shall be one who makes desolate, Even until the consummation, which is determined, Is poured out on the desolate.

The prince is the Antichrist, the one-world leader, who will confirm a seven-year covenant. This seven-year period is the 70th week of Daniel. It is the tribulation of the Jews that God will use to call a believing remnant to Himself.  It is the end times about which the book of Revelation prophesies.

This chart shows the first 69 weeks (483 years), beginning with the decree of Artaxerxes and fulfilled on Palm Sunday. Then a gap, followed by the last 70th week, the final 7 year period yet to come.

The entirety of this prophesy is about God dealing with His covenant people Israel.

A Gap in the Timeline?

The gap covers the time of the Church Age, the Body of Christ, which began after the cross and will end with the Rapture.  The Body of Christ is distinctly different from the Nation of Israel. It is comprised of all who have trusted in Jesus, been saved by Him, and have received the gift of the indwelling Holy Spirit.   The Church Age is also called the “time of the Gentiles” — another indication of its distinction from the Nation of Israel.

During the Church Age, Christians are in a covenantal relationship with God through the New Covenant established in Christ.  Christians are not under the Old Covenant that God made the Nation of Israel.  Yet there remain to be fulfilled prophecies and covenantal promises that God gave to Israel.

God will fulfill His promises in the Seventieth Week of Daniel. Jesus will usher in this time period by opening the seal judgments in Revelation 6.  Only Jesus is worthy to open the seals. He alone will determine when this period of judgment and wrath will begin.

Although the severity of wrath will increase and culminate in what is called the Great Tribulation (the last 3 1/2 years of the Tribulation, Matt 24:21), the judgment and wrath of God will begin to be poured out when Jesus opens the seals. This explains why a pre-wrath view of Rapture (suggesting the Church will be raptured after the first 3 1/2 years), is not biblical.

The Church, the Body of Christ, is not appointed to wrath (1 Thess 5:9). The entire seven-year period will be God’s fulfillment of the prophecy given to Daniel and His judgment on the Nation of Israel.  The purpose of God’s judgment is to bring a remnant of people (believing Israel) to Him and to begin fulfilling His covenant promises to them.

Hosea 5:15  I will return again to My place Till they acknowledge their offense. Then they will seek My face; In their affliction they will earnestly seek Me.”

Read also: What are the Four Views of the End Times? A Pre, Post, and Amillennial Chart